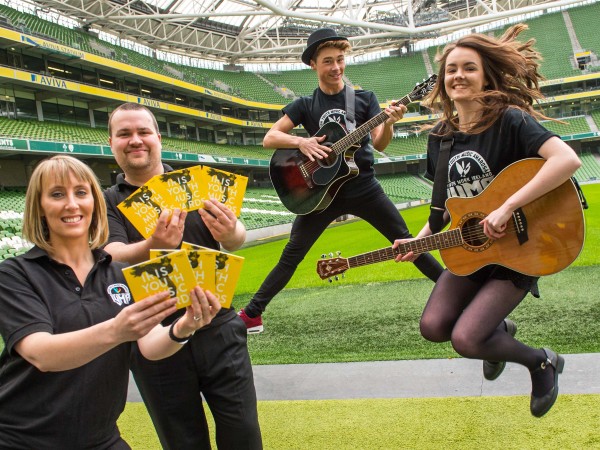 Limerick Musician Laura Duff, who hails from the South Circular Road, was at the Aviva Stadium in Dublin for the launch of Youth Work Ireland’s Irish Youth Music Award (IYMA) album which includes her award winning self-penned song In The Winter.

From the home of Irish rugby and football, Laura then made the short trip to the iconic Dublin Castle where she sang two songs, including In The Winter, for hundreds of guests and award winners who were at An Gaisce Awards (President’s Awards).

Titled, The IYMAs Vol 8 and recorded at Temple Lane Studios, Temple Bar, the album features a number of self-penned tracks from some of Ireland’s talented young musicians who were finalists at the Irish Youth Music Awards held earlier this year.

‘It’s been an unbelievable few days and it feels like I’ve launched my first release!’ said a beaming Laura, who won the Paul Clancy Award for song writing for In The Winter.

The album release also saw the official launch the Irish Youth Music Awards 2016 programme which Laura credits enormously for her success having taken part in this year’s programme as a solo artist and as a member of local band, Little Tents.

Laura,a former student at Salesians Secondary School, Pallaskenry, Co.Limerick said: ‘The IYMAs experience was excellent as it gave us (Little Tents) plenty of exposure, the experience of performing live and recording in a studio’.

When not in Limerick or singing for Uachtarán na hÉireann at Dublin Castle, Laura can be found in UCC where she is studying music at the famous southern university: ‘I’m studying for a BA in Music so music is a big part of my life and I would like to pursue a career in the industry’.

The Irish Youth Music Awards is Ireland’s largest youth led music programme and to date over 85,000 young people across the entire island of Ireland have taken part and benefited from the programme, which is delivered in Limerick by Limerick Youth Service.

The programme offers young people an opportunity for young people to gain invaluable experience of the music industry, both from a performance and behind the scenes with teenagers learning about skills such as recording, sound engineering, marketing, social media and public relations.

Speaking at this week’s IYMAs album launch, programme director Barry Lennon said: ‘It’s great to have a programme like this where we can empower young people and use music as a creative force within their lives.’

Lennon also said: ‘Music is an important educational tool to support young people to progress to further educational opportunities and also employability within the ever growing creative and music industries that exist within Ireland and overseas.’

Limerick Youth Service is also asking people to help get the IYMAs album into the Irish charts and purchase a copy the album which be purchased directly from the HMV online store, on I-tunes and on Amazon Prime.