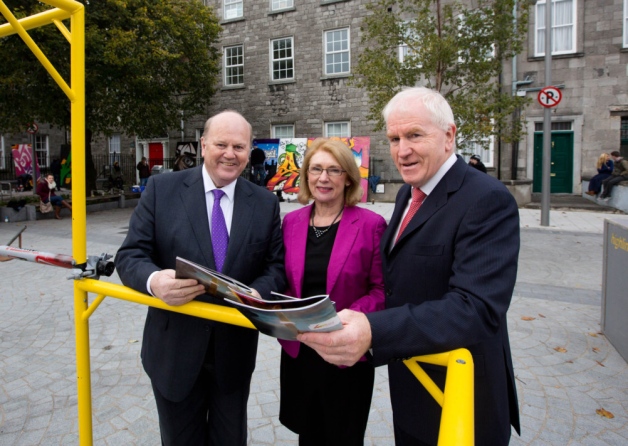 Monday, 04 November 2013: Today sees the much anticipated launch of highlights of Limerick National City of Culture 2014.

A New Year’s Eve carnival will set the tone as city becomes national stage for cultural expression and performance with Ooer 200 performances to take place, with additional big name acts to be revealed over coming weeks and months.

For key elements of the year-long programme see www.limerickcityofculture.ie/programme – that will deliver an unparalleled blend of cultural expression and performance in Limerick throughout 2014 were announced at Daghda Dance Space in the old St. John’s Church in the city.

Over 200 different performances and exhibitions, spanning all aspects of culture and the arts, that will thrill, calm and even challenge the senses will be delivered by leading and critically acclaimed international, national and local acts in the most varied and embracing year of cultural expression staged in Ireland.

The year will leave a lasting legacy also in the city with some 109 Limerick groups having successfully applied for funding to deliver shows and exhibitions as part of the programme. Further marquee acts for large scale outdoor performances will be announced in the coming weeks and months.

Limerick National City of Culture opens with a New Year’s eve extravaganza that will include a Procession of Light – comprising illuminated floats, carnival, drama and community performers – through the City to the historic and majestic King John’s Castle on the banks of the River Shannon and concert, with tens of thousands of spectators set to be treated to a midnight fireworks and special effects extravaganza.

The spectacular launch will set the tone for a year of theatre, drama, sport, literary and artistic endeavour that will play out on established and well-known stages throughout the city as well as through street theatre and pop-up urban platforms.

The year will transform Limerick into one of the country’s leading tourist destinations, with almost one million people expected to participate in events throughout the year.

Speaking at the launch event, which included a dramatic dance and contemporary urban art performance by the Limerick based Honest Arts Production Company, Chairman of Limerick National City of Culture 2014 Pat Cox said: “Our programme aims to unlock and reveal Limerick’s cultural potential, to turn the city into a year-long national stage, hosting acts, arts and events from the intensely local and community based to international acts which will perform for the first time ever in Ireland. The edgy, urban and contemporary will blend with the traditional to reveal the rich cultural diversity and heritage of the Treaty City.”

“This year will be a chance to shine a light on Limerick and to lift the lid on the best that we have to offer as Ireland’s premier cultural venue in 2014. Tabhair cuairt agus aimsigh na rúin.”

Complimenting Limerick on the launch of the programme, Minister for the Arts, Heritage and the Gaeltacht Jimmy Deenihan said: “One of the primary objectives of National City of Culture initiative is to leave a long-term impact and based on the programme outlined today and what is to follow, one cannot help but be excited by what lies ahead for Limerick next year.

“As the Year of the Gathering comes to a close, Limerick will be opening up with this 12 month gathering of culture, which will attract huge numbers to the city over the course of the year. This city is going through a wonderful renaissance in so many respects and next year will be a real milestone in that process.”

Minister Michael Noonan said he looked forward to the wide range of cultural events that will be taking place every week throughout the year. He said that along with the amalgamation of the two Local Authorities and making Shannon airport an independent entity, the designation of Limerick as National City of Culture 2014 is a key part of the rebranding of Limerick.

Looking forward to the year ahead, Limerick National City of Culture Artistic Director Karl Wallace said: “Limerick has such a rich cultural diversity being an urban and contemporary city. The programme we will deliver next year will reflect that. There will be something for everyone, from large outdoor popular concerts to cutting edge arts.”

“Most importantly, we are learning that legacy is essential to our City of Culture and a rich programme of work which provides opportunities for beyond 2014 will take place and be the core of our programme. Exciting international Irish premieres, will sit side by side with local work of the highest standard, solidifying Limerick as both a destination city and also a truly representative City of Culture.”

The appointment of Patricia Ryan as CEO of Limerick National City of Culture 2014 was also announced at today’s programme launch.