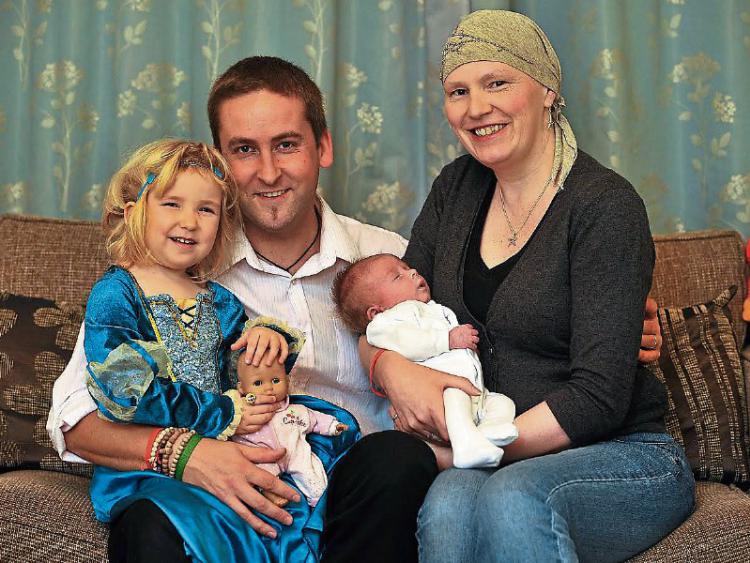 Picture above: Peter Wallroth and his late wife Mair, and their children Martha and Merlin, who was born just 10 weeks before Mair passed away. pregnant women battling cancer

A Limerick native who sadly lost his wife to cancer soon after the birth of their second child is taking on the role of setting up a charity in Ireland to raise awareness and bring support to women who are battling cancer while pregnant.

Originally from Shannonbanks, Peter Wallroth set up Mummy’s Star, a cancer support charity for pregnant women in England and Wales in 2013, and now his main goal is to establish the charity in Ireland.

The official launch of the charity will take place during the weekend of the Barringtons Hospital Great Limerick Run in May, when Pete hopes they will have some 15 runners taking part in the race to raise awareness for this cause.

Pete’s wife Mair, who was diagnosed with breast cancer while she was pregnant, died three years ago, just a short 10 weeks after their son Merlin was born. Their first child Martha, now six, was aged three at the time. Mair, from north Wales, died aged 41.

“Due to the lack of support available to support families in this very unique situation we set up the charity and to date we are supporting over 200 women around England and Wales by offering emotional support through connection and forums, advocacy on behalf of patients and working with health professionals and providing small grants to give some financial relief to these families,” he told the Limerick Leader.

He said they already have a small scale but strong support base in Ireland, especially in the midwifery community, through the Irish Nurses and Midwives Organisation (INMO), which he described as “a huge advocate of our work”. He said he wants to encourage women to be aware of cancer symptoms, which sometimes can be masked by pregnancy symptoms.

“We seem to have tapped into something that wasn’t here before, and would like to do the same in Ireland. We want to be able to provide emotional support and assist with some of the costs of treatment, and raise awareness that sadly women do die after cancer shortly after birth,” he said.

He also wants to emphasise that it is possible to be treated and supported during pregnancy, even though there are a “lot of myths out there and a perception that you can’t have chemo while pregnant. That’s just not true, but there are parameters there, and it may not be safe up to a certain point. It’s not a talked about area. A lot of websites, rather than providing women with some relief, just heighten concerns. There is an online community for these women to talk to each other and help to take away from some of that isolation. They can feel like their pregnancy is ripped away from them, and that they lose their early bonding time with their child, especially if they are undergoing treatment. There is a big physical impact and a big psychological impact as well.”

For details see www.mummysstar.org or see their Facebook page

Young Social Innovators Speak Out at the Limetree Theatre