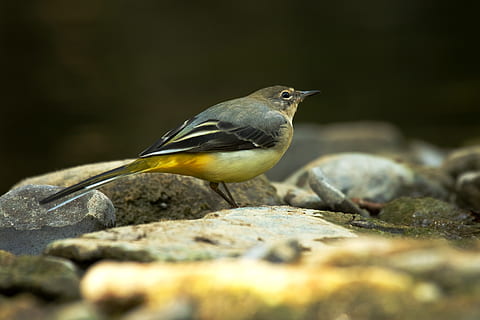 The Hidden Life of Rivers: A grey wagtail exploring the riverbank.

We took the short trip to Toorenbrien Bridge been careful not to stray over the 2km distance. Here there is a large parking space and I and the kids were going kick sampling in the river. This is a really fun activity that I have often done with schools and other groups. Both adults and kids find discovering the hidden life of rivers great fun.

We unpoised out gear, net, containers, tray, and freshwater guide. The kids could fit under the arches of the bridge but I had to duck down. Stalactites hung from the roof and there were plenty of gaps for bats and birds to nest and roost in.

The craftsmanship of the stones is amazing and old bridges are best admired up close. A rich carpet of plants were growing between the stones adding to its value for wildlife.

A pair of grey wagtails were hanging around the bridge and were not to put out by the strangers in their watery world. On the sunny bank primroses and Lesser celandine were in flower and a bumblebee was busy fuelling its body with nectar.

We set up a large gravel bank in the middle of the river and immediately got to work. Choice of river is important as a good gravel bed increases the chances of discovering life.

Lesser Celandine can be seen in full bloom.

While the kids filled up the tray and bucket (reused after bird nuts were gone) with water I stepped into the river. Placing the open end of my net with the flow of the water I gently used my foot to disturb the gravel. I carefully lifted up my net and could see lots of wiggling. The kids were telling me to hurry on and I emptied the contents into the white tray.

After a few seconds, all of the creatures started to move. There were several mayfly nymphs and soon these will be hatching out to the delight of fisherman. Predatory dragonfly nymphs patrolled the edges of the tray and the other creatures gave them a wide berth. We could see their gills moving as they breathed. They can spend up to two years in the water depending on the availability of food in the river.

Whirligig beetles bumped and banked into everything and these insects live life in the fast lane. Cased caddisfly larva swan snake-like and watching the different means of propulsion is as interesting as the creatures.

We waded down the river to a tiny waterfall. This gave a unique view of the river and the landscape. A natural sandbar was full of fresh tracks of the fox and I think also a badger.

Next, we crossed under to the opposite side and this is the territory of a riverbank robin and wren. They scolded us loudly and we did not delay too long.

One sweep of the river revealed a very large freshwater shrimp and a really small one.

Of course, it had to happen and one of the kids slipped and got soaked. This was the signal to head back home and everyone was getting tired and hungry.

Our last drama was remembering just in time that the wellies were on the roof of the car.