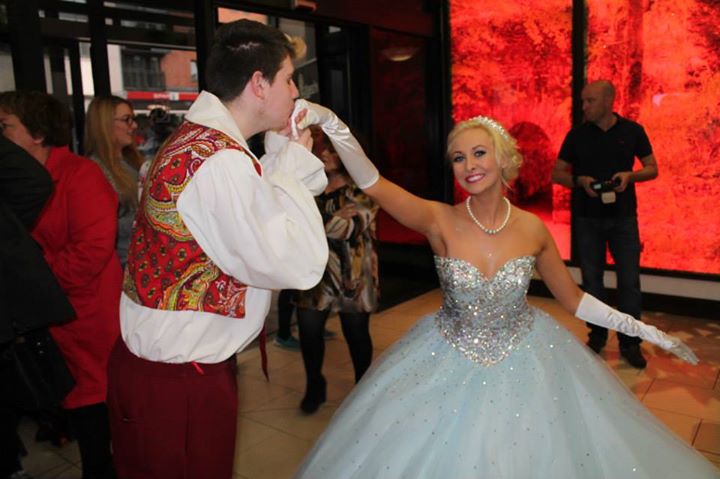 Limerick Panto Society was founded in 1985 with the purpose of creating and keeping Panto tradition alive in Limerick. After the massive success of Peter Pan – the Society is embarking on its 30th annual production when they stage a spectacular new production of Cinderella. This year the group will again be performing at the magnificent new theatre at Mary Immaculate College. The Lime Tree Theatre is a purpose built theatre and seats over 500 people. The group is already preparing for this year’s production which will be staged from December 27th 2014 to January 4th 2015.

The Society’s first production was staged at the Crescent Hall, O’Connell Street, Limerick, in December 1985 and January 1986. Over €130,000 euros have been raised over the years for children’s charities such as Cystic Fibrosis, Dochas, Limerick School for the Deaf, Cari and St Gabriel’s Centre just to name a few and the Society continues its policy of supporting children’s charities each year.

This year the Charity Night is in aid of MPS (The Irish Society for Mucopolysaccharide Diseases) The MPS Society was founded in 1995 by family and friends of affected children and is run on a completely voluntary basis. There is a continuous process in the cells of the body replacing used materials and breaking them down for disposal. Children born with MPS are unable to produce one of the enzymes essential for the process. There is no known cure for the disease although research is continuing and the hope is that a cure will eventually be found. The MPS Society supports the children and their families and also hopes to raise awareness and support for further research.

Emma O’Driscoll presenter on Children’s TV for RTE has appeared many times with the group – including her fantastic performance as Tinker Bell in last year’s Peter Pan. The Society is delighted to announce that Emma will once again be appearing with the group when she stars in the title role of Cinderella in this year’s exciting production of Cinderella the classic pantomime.

This season’s offering will be the society’s 30th annual production. Tim Cusack will again play Esther Fabric, one of the Ugly Sisters and Tim along with his “sister” Poly Fabric played by Panto veteran Damian Shaw promise to enthral both young and old with their comic antics. Shauna O’Halloran will play their mother Lycra Fabric, its French you know.  John Finn has written an original script – John is widely known for his appearances with many of the local dramatic groups. John will also star in the production when he takes on the role of Count De Money.

The society is delighted to announce that this year’s show will once again be in association with the Crescent Shopping Centre. The Crescent has always supported the group and the Traders Association will be the main sponsors of the production this year. The society have also secured Corporate Sponsors Fyffes Bananas, Mr Binman, Limerick City Hotel, Abhann Logistics, Quirke and Shaw Cleaning Supplies and McDonalds and indeed the group are delighted and grateful to all their Sponsors, Patrons and Supporters.

The Panto Society has had the support of local Stage and Dance Schools all through the years. Performing the children’s chorus numbers in Cinderella will be Spotlight Stage School under the direction of Judy O’Connor and Margaret Hough and Expressive Arts under the direction of Pearl Kiely, May O’Halloran and Geri O’Sullivan It is wonderful to see the talent being produced by all these hard working Stage Schools.

We are welcoming back some really talented people this year the Prince Charming role will be shared between two outstanding performers Mícheál Ó Dubhghaill and Paul Kelly. Mícheál is well known in the local entertainment scene as he has appeared with many of the local groups as well as several TV credits to his name with TnaG. Mícheál runs a local Stage School and plays with the band Free Beer. Paul Kelly is a noted musician and singer and makes a welcome to the Panto Stage. Dandini will be played by panto stalwart Keith McGuane with the talented Nastasia Vashko as the Maid Marian.

Buttons one of the traditional characters in the Cinderella panto will be shared between Peter O’Brien and Stuart Mackey. Killian Fitzgerald returns to play the King with Sarah Allen as his Queen. The zany Fairy Godmother will be played by Laura Hunt who although young in age has been involved with the panto society for many years. The “Brokers Pair” who are the sidekicks for the evil Count De Money will be played by Aisling Cusack and Niamh Cusack.

Tony Cusack who has vast experience in the Light Entertainment field will lead the production team for Cinderella. Tony has assembled a talented and experienced group to ensure that this year’s production will maintain the standards of past performances. Dance Direction of the Limerick Panto Chorus is in the capable hands of Carol Cusack while we are delighted to have choreographer Lisa Hogan back this year and she is ably assisted by Sarah Allen. Morgan Roughan is the Chorus Master with Musical Direction in the hands of Michael Hinchy.

The Costumes will be co-ordinated by Wardrobe Mistress, Sandra Finn assisted by Imelda Cusack. The Stage Manager is Damian O’Brien while Malachy Cusack is the Production Manager, while Johnny Corr is our Technical Manager. Michael O’Brien and Denis Cusack will be in the Lighting Box.

The PR team at the Society are already working hard led by PRO Damian Shaw and Secretary Dympna O’Kelly, so early booking is advisable as a number of performances are selling out. The group are offering attractive Group Rates – see details below re dates and Group Rates. The Society has been producing top quality family entertainment for 30 years and they are looking to the people of the Mid-West to come and support their local Panto.

They have a strong family ethos and are relishing the challenge of staging their latest production at the Lime Tree Theatre, Mary Immaculate College – if you or your group are interested in booking or require any further information you can contact 087 6126627. Booking at the Lime Tree has opened – 061 774774 or limetreetheatre.ie

Dates/Times for this season’s Panto are as follows:

Tickets can be booked online at www.limetreetheatre.ie or by calling the box office on 061-774774
Check out the Panto Website at www.limerickpanto.com