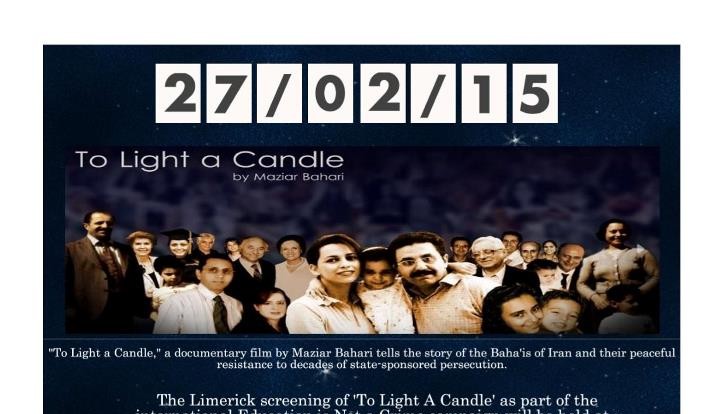 Limerick will host an international human rights event on February 27th when the documentary film, To Light a Candle by well-known Canadian journalist Maziar Bahari, is screened in Limerick as part of the global Education is not a Crime Campaign. The film will be screened at the Public Library in The Granary at 7.30 pm.

Archbishop Desmond Tutu and Irish Nobel Prize winner Mairéad Maguire are amongst a host of international human rights activists supporting this campaign which brings attention to the fact that since the early 1980s Baha’is in Iran have been barred by their government from third level education.

“The Iranian government says that education is a crime for Baha’is. But I want to tell you that we can change that – we can give voice on their behalf,” said the Archbishop. “We can tell the government of Iran, and the world, that banning the Baha’is or any group from higher education is hurting Iran and the Iranian people.”

February 27th is an international day of action for the Education is Not a Crime Campaign which means that on the same day that the film will be shown here in Limerick. To Light a Candle will also be shown in venues all over Ireland and in hundreds of cities and towns across the globe. “We are so happy to be part of this worldwide human rights campaign,” said Pat Murphy, a representative of the local Bahá’i Community, organisers of the Limerick screening.

To Light a Candle’s producer Maziar Bahari was Newsweek’s Iran reporter from 1998 to 2011 and has produced a number of other documentaries about Iran. Mr. Bahari is not a member of the Baha’i community but has a spent some time in prison in Iran. The recently released film, Rosewater, written and directed by Jon Stewart, recounts the story of Mr.Bahari’s own imprisonment. “For me the Baha’is are a barometer for what’s going on in Iran,” said Mr. Bahari, “When society is more repressed, it’s the Baha’is who are the first victims.”