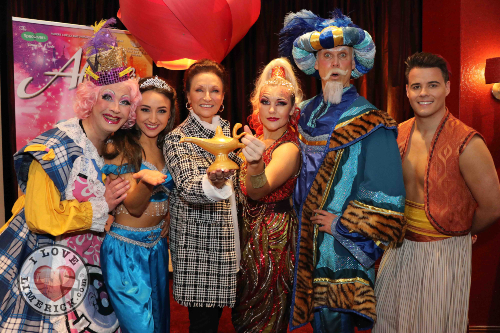 Elysha Ní Chúláín is joined with Enya Mc Intyre as they take a look at this week’s Local Business, Events, Sports, Arts and Entertainment news around Limerick.

To kick off this week’s episode of the, I Love Limerick’s Podcast show, We discussed this week’s hero, Limerick hurling hero and 2019 All-Star, Aaron Gillane, he has been named as an Ambassador for humanitarian relief and development agency, GOAL. Aaron spoke about his delight at being a GOAL ambassador, “It’s great to work with an inspiring truly global organization like GOAL.

Aaron joined Patrickswell GAA Club at a young age and has played for his county at minor, under-21 and senior level. He scored three points in Limerick’s first All-Ireland Hurling Final victory in 45 years in 2018. Siobhan Walsh, GOAL CEO, said Aaron is an absolute inspiration to the GOAL team and so many young people. His achievements are the result of a lot of hard work, commitment, determination and honing of his special skills as an incredible sportsman.

Next up they discussed the upcoming Specsavers Limerick Panto Aladdin at the University Concert Hall, from December 16 to January 5, 2020. At the launch at the Savoy Hotel in Limerick the star-studded cast, led by Johnny Ward as Abanazer, Johnny Ward, one of the country’s most familiar faces following his stints on Fair City and Dancing with the Stars, will be joined on the University Concert Hall stage this year by UCH panto favourite Richie Hayes (Wishey-Washey), singer, actor, and star of the 2017 Mrs Browns’ Boys Christmas Special, together with Dayl Cronin (Aladdin), Dancing with the Stars 2017 semi-finalist and former member of Irish boyband Hometown and Rachel O’Connell as the Genie! Also returning to this year’s cast will be comedian Tom O’Mahony (Garda Pong), Myles Breen (Widow Twankey), Richard Lynch (the Emperor) and Hayley-Jo Murphy (Jasmine).

The Specsavers Limerick Panto at Aladdin at UCH is the hottest ticket in town with all shows selling out in advance, so to grab the best seats, for the day that suits you, book now.

Another Christmas event hitting Limerick this week is the Light Up Limerick event. It’s expected to attract thousands of people onto the streets of the city centre on Sunday, November 17 to see the Christmas lights being turned on. This also marks the beginning of Light Up Limerick 2019 with more than a month of festivities and family-friendly events across the city and county.

Limerick Youth Choir and Zion Vocal Ensemble will perform for the crowd and get them into the Christmas spirit with a host of Christmas songs and carols, Panto characters from Limerick Panto Society’s Beauty and the Beast at the Lime Tree Theatre and The Specsavers Limerick Panto Aladdin at the University Concert Hall will make an appearance, while street performers will be mingling through the crowd, entertaining as they go.

Join Liveable Limerick for their Charity Xmas Dash fun runs to warm up before Light Up Limerick. Events include Mr. & Mrs Claus three-legged race, a celebrity race, wheelchair dash, and sack race. All proceeds to Novas & the Peter McVerry Trust. The build-up to the switching on ceremony takes place from 4.30 pm on Sunday, November 17 with the lights being turned on at 6 pm.

Entry costs for this event are €250 per company. This package includes 4 free tickets to the races, entry to the corporate area with complimentary buffet, the opportunity to meet a network of 95 companies and also a meet and greets with Davy Russell. Each company will also have its logo on the race card on the day. I

The overall prize is a sponsorship package at Limerick Racecourse at one of five race fixtures in 2020. The winning company will be hosted in a private suite with hospitality for 50 people including a 2-course buffet lunch. The winning company will receive branding rights for a race on the day which will be tailored to their requirements. All proceeds of the Inter-Firm Charity Race Day 2019 will go directly to the Live95 Helping Limerick Children fund.

Next up was the Family Carers Ireland recently held its Limerick Carer of the Year Ceremony, awarding it to long-time carer, wife, and mother, who has been a fulltime carer for almost thirty years.

Mrs Francis O’Donoghue from Kildimo, Co. Limerick, was presented with the award on Friday, November 8 in the Absolute Hotel by Mayor of Limerick Michael Sheahan and Mick Galwey, Netwatch Security Brand Ambassador, after being nominated by her daughter Michelle.

And finally, they talked about Bellissimo Limerick who recently celebrated their  20th anniversary. One of Ireland’s best-known salons recently celebrated 20 years in the business and since opening, Bellissimo has developed into a community that has been loving and caring for customers for two decades and shows no sign of stopping.

The Bellissimo sign and lights are the first things you see crossing over the Shannon Bridge into Limerick and once you are inside the door, the sense of warmth and community makes you feel right at home as you greeted by the smiling faces of receptionists Vanessa, Sarah, and Esther at front reception.

Bellissimo is an international award-winning hair and beauty salon. Bellissimo Limerick’s professional beauty therapists and outstanding stylist team have been called on regularly to work on hair and makeup for television programmes, for well-known Irish personalities, and for high profile fashion shows. Congrats Bellissimo here is to another 20 years!