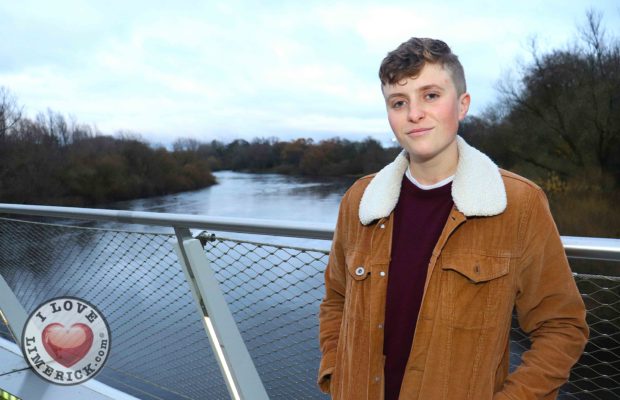 Transgender man Will Keohane from Castletroy, Limerick pictured at the University of Limerick on Tuesday, November 26. Picture: Kate Devaney/ilovelimerick.

Join Elysha Ní Chúláín and Enya Mc Intyre as they take a look at this week’s Local Business, Events, Sports, Arts and Entertainment news around Limerick.

To kick off this week’s episode of the, I Love Limerick’s Podcast show we talked about The brave Limerick Transgender man, Will Keohane. Will has reached out to the public for help in a bid to raise enough funds to go to Toronto for gender affirmation surgery.

The 23-year-old Limerick man is currently fundraising for top-surgery, a gender-affirming surgery performed on the chest to alter the chest appearance. Will announced came out to family over 18 months ago and has been actively transitioning for the past year.

Due to the long waiting periods and systematic barriers in Ireland’s health care system, Will has received much of his care to date in the UK but in order to take the next steps in his journey, he will need to go further afield.

The cost of top surgery in Canada, including flights, is over €10,000 so Will has set up a Go Fund Me page in the hopes you might be interested in helping his cause. In the space of 5 days, over 180 people have donated and a whopping €4,900 raised.

Next up, Limerick singer-songwriter Emma Langford has become the first Limerick musician to be awarded the inaugural Dolores ORiordan Music Bursary, receiving €4,000.

The bursary was launched this year after being set up by Dolores’family, with help from Limerick City and County Council.  Emma Langford is a folk singer from Caherdavin, who launched her career back in 2016 and since then, has risen to international recognition, appearing at the Snug Stage at Milwaukee Irish Fest back in August.

The award will be put towards funding her second album, which is due for release next year, along with contributing to costs for her upcoming music video and support the writing for the next record. Emma released her first album, ‘The Quiet Giant’, back in 2017.

Emma Langford wasn’t the only winner, Two other bursaries were also announced, both in the area of film and both worth €8,000. Crude Media has been awarded one of the bursaries to make their short film ‘Imbas Forosnai’, directed by Shane Serrano and featuring local spoken word artist Shane Davis. Award-winning freelance filmmaker Grace Quilligan has also been awarded to help fund her film ‘In Memoriam’.

Next up we talked about the upcoming Christmas events happing in Limerick starting off with, Limerick Youth Service Christmas Fair at the Community Training Centre at Lower Glentworth St, on Thursday, December 12 from 10 am – 2 pm.

Traditional gifts such as Christmas wreaths, flowers, and yuletide logs will also be available as well as kennels, birdhouses and flower baskets made by leaners at LYS’ Wood Art Employability program.

Not only in Limerick getting into the Christmas spirit but there was plenty in the past weekend at Shannon Airport. Christmas exploded excitedly and noisily over Shannon Airport at the weekend as over 2,000 lucky children and their parents got to meet the special one 15,000ft above sea-level as the annual Shannon Santa Flights took to the skies.

Families from all four provinces descended on the airport over the weekend to board the most magical flight of the year, many making it an overnight treatment to the region as they traveled from as far afield as Fermanagh, Mayo, Sligo, Dublin, and Kerry.

The ‘toy show’ of the aviation world, the annual fixture has become the early festive staple of the west, with tickets as golden as Friday night’s magical Late Late itself.  But for the 2,000 whose names were pulled out of the hat – a lottery is used due to the vast oversubscription for the seats available – the wait was worth it.

The two-day event sees children greeted first by Santa’s helpers on arrival and other well-known cartoon characters. There were festive fun and games and dancing to while away the anxious hour before the children got to board Santa’s aircraft and then the mayhem took flight.

“It’s brilliant fun and the noise is deafening,” said airport Managing Director Andrew Murphy.  “The children are already well buzzed by all the fun and games and when Santa arrives onboard high up in the skies, the reaction is fantastic.