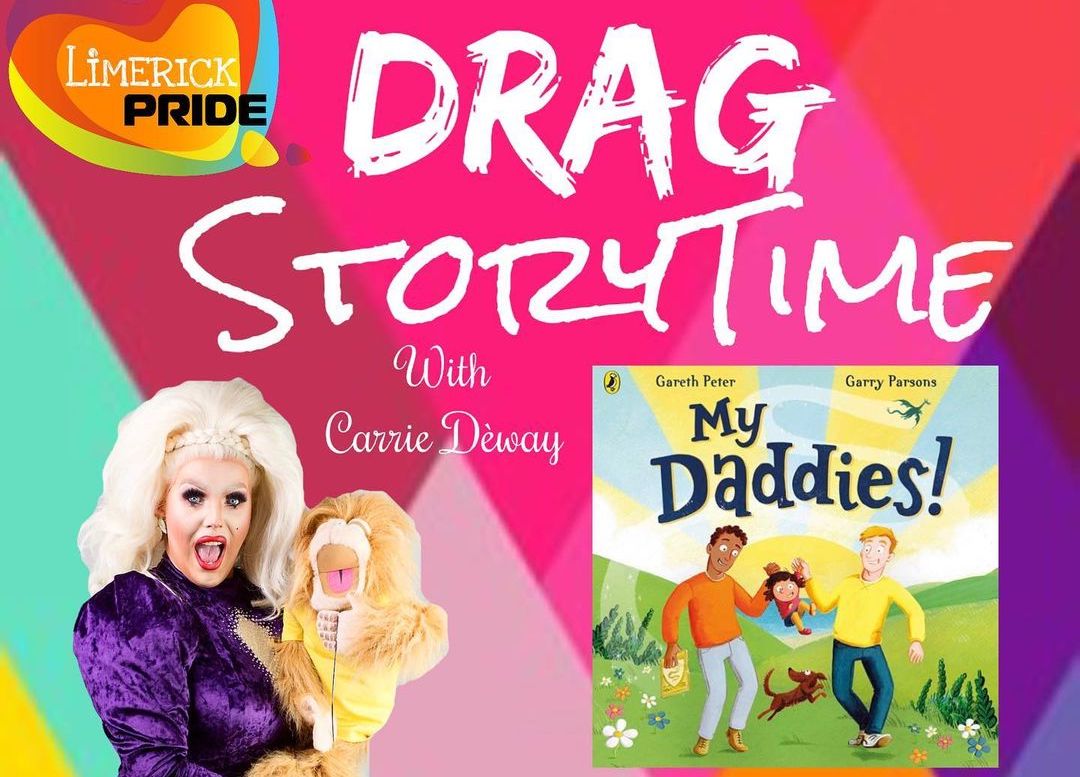 Limerick Pride Drag Storytime is a family-friendly event, aimed at children. The very special event will feature drag queen Carrie Deway reading ‘My Daddies’ by Gareth Peter. ‘My Daddies’ is a heartfelt book that introduces children to the many kinds of families that exist in the world.

The event was also organised by Carrie Déway alongside Lisa Daly, the Chairperson and Director of Limerick Pride.  Lisa Daly, Chairperson explains, “Given current circumstances, ‘Drag Storytime’ will take place as a virtual event. Limerick Pride is a year-round organisation and we are constantly producing quality events such as our Royal Rumble on Paddy’s Day which featured eight separate lip-syncing acts. This Drag Storytime event is not only for our LGBTQ community but for a wider audience. It’s a family-friendly event that shows the beauty of family in all the colours of the rainbow.”

Speaking about the book, Carrie said, “the overall message that this book holds is very important for our entire community and the world to see that same-sex families, although they may be different to the conventional idea of a family, that they too are no different at all. Families come in all shape, sizes, colours and backgrounds. The sooner the world allows this to be the norm the sooner it will be a brighter and beautiful place.”

Carrie has been working with Limerick Pride for nearly three years now and this year marks her first year of being a participant on the Limerick Pride Committee.

This will be Carrie’s first-ever Drag Storytime, and Carrie is excited to show everyone that drag can be family-friendly. Carrie feels that the personalities that drag queens express in bars, theatres, pantos, holiday bars and even television can be used to entertain entire families rather than just adults as entertainers can come in many different forms.

Carrie is excited about the event as she feels that it will bring about a very important message saying, “as a drama teacher to young children as well as a drag queen and a queer person, I’m overjoyed about Gareth Peter and Gary Parsons book ‘My Daddies’ as it represents such a loving part of our community and it shows children that come from same-sex parents that they are represented in literature and that they too are accepted.”

Limerick Pride Drag Storytime will be available from Thursday, April 8, 2021, at 6 pm via all of Limerick Pride’s social media channels.