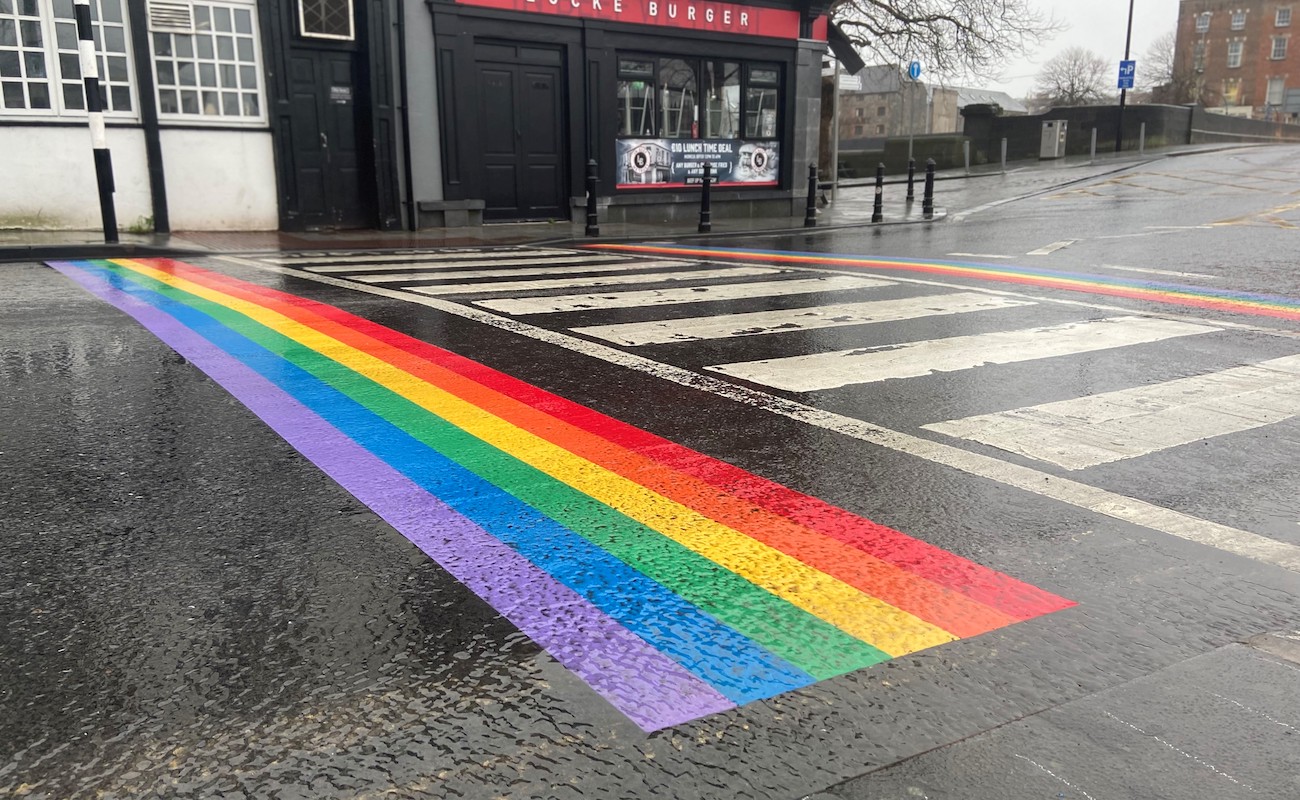 It is the first time the Pride Rainbow has appeared on a crossing in Limerick.

A Limerick Pride Rainbow crossing has been installed on a pedestrian crossing next to Limerick City and County Council’s offices at Merchant’s Quay.  The new crossing, located on Bridge Street, is designed to proudly express how inclusive Limerick is as a place to live, work and call home.

It is the first time the Pride Rainbow has appeared on a crossing in Limerick. The new addition has been installed by Limerick’s Active Travel team as part of its wider plans to upgrade and improve the pedestrian and cycling network in Limerick.

Mayor of the City and County of Limerick, Cllr Daniel Butler said, “One of Limerick’s strengths is its diversity. The LGBTQ+ community is a huge part of who we are in Limerick, and I am delighted to see the Pride Rainbow colours appear in such a prominent way. Thousands of people pass along this route every day, and this Limerick Pride Rainbow crossing is a very visual way for us to say that Limerick is inclusive and welcoming to all.”

The idea to create rainbow crosswalks appears to have first emerged in Taipei, Taiwan . A campaign for promoting gender equality organised by the National Taiwan Normal University at the beginning of June, 2008. The creators were Dr.Prof. Jerry H. Hsia and the creative team formed by the Graduate School of Fine Arts, NTNU.

The idea to create rainbow crosswalks in West Hollywood was part of the 2012 Gay Pride Month celebrations, initially proposed by the LA-based artist Martin Duvander with the crosswalks at the intersection of San Vicente Boulevard and Santa Monica Boulevard painted rainbow colours for the month of June.

One of Limerick’s strengths is its diversity. The LGBTQ+ community is a huge part of who we are in Limerick and I'm delighted to be able to deliver this working with Lisa Daly of @limerickpridehttps://t.co/gi8rybdVPA

Lisa Daly, Chairperson of Limerick Pride said it would become a tourist attraction.

“It is in a brilliant location as City Hall is where we start our Parade every year. This is another step forward for LGBTQIA visibility. We are really excited to have worked with Limerick City County Council behind the scenes on providing a historic moment with the first rainbow crossing in Limerick, it’s designed to proudly express how open and accepting our city.

During the planning and research process it was decided to place the lines at either side of the crossing as to not distract guide dogs, we wanted to insure it was as safe as possible for all.

This is a great moment for our community and city with Limerick showing equality for all, which I’m personally proud to see happening and hope it brings as much joy to the rest of the community.

Thanks to Mayor Daniel Butler for working with the Limerick Pride committee to make this happen and for his continued support towards Limerick Pride and the LGBTQI community of Limerick.

We are very excited to have a physical Parade this year and welcome everyone in Limerick to come out and fly their rainbow colours in support of Pride in Limerick.”

This is the first year that the Limerick Pride parade has been set to go ahead physically since the beginning of the Covid-19 pandemic. For the last two years, the festival has taken place virtually. Last year, Limerick Pride won a Non-Profit Community Group of the Year Munster Innovation Award for Virtual Events at the Irish Enterprise Awards 2022, hosted by EU Business News for their 2021 Pride Festival.

To Register a group for Limerick Pride Parade 2022, go HERE

Related Topics:limerick pride
Up Next