Independent Senator Frances Black and Deputy Niall Collins are scheduled to come to the South Court Hotel, Limerick to host a Limerick Public talk on Palestine and to speak about their experiences in the Palestinian West Bank, recent developments in the region and the Occupied Territories Bill 2018.

The Occupied Territories Bill 2018 was tabled by Senator Frances Black and seeks to ban trade in goods produced in illegal Israeli settlements in the occupied Palestinian West Bank. It passed a historic first vote in July. It returns to Seanad Éireann for the next round of voting on November 28.

At the Limerick Public talk on Palestine, Senator Black will outline why she tabled the bill and the importance of solidarity with Palestine. She will speak about her visit to the West Bank & Gaza earlier this year, where she met with community groups and activists working against the occupation and saw first-hand the devastating human rights conditions on the ground. She returned to Ireland just days before the world was shocked by the brutal killing of over 100 protestors at the Gaza border.

Deputy Niall Collins, Fianna Fáil spokesperson on Foreign Affairs & Trade, will also speak about his recent visit to Israel & Palestine and his party’s work on this issue. 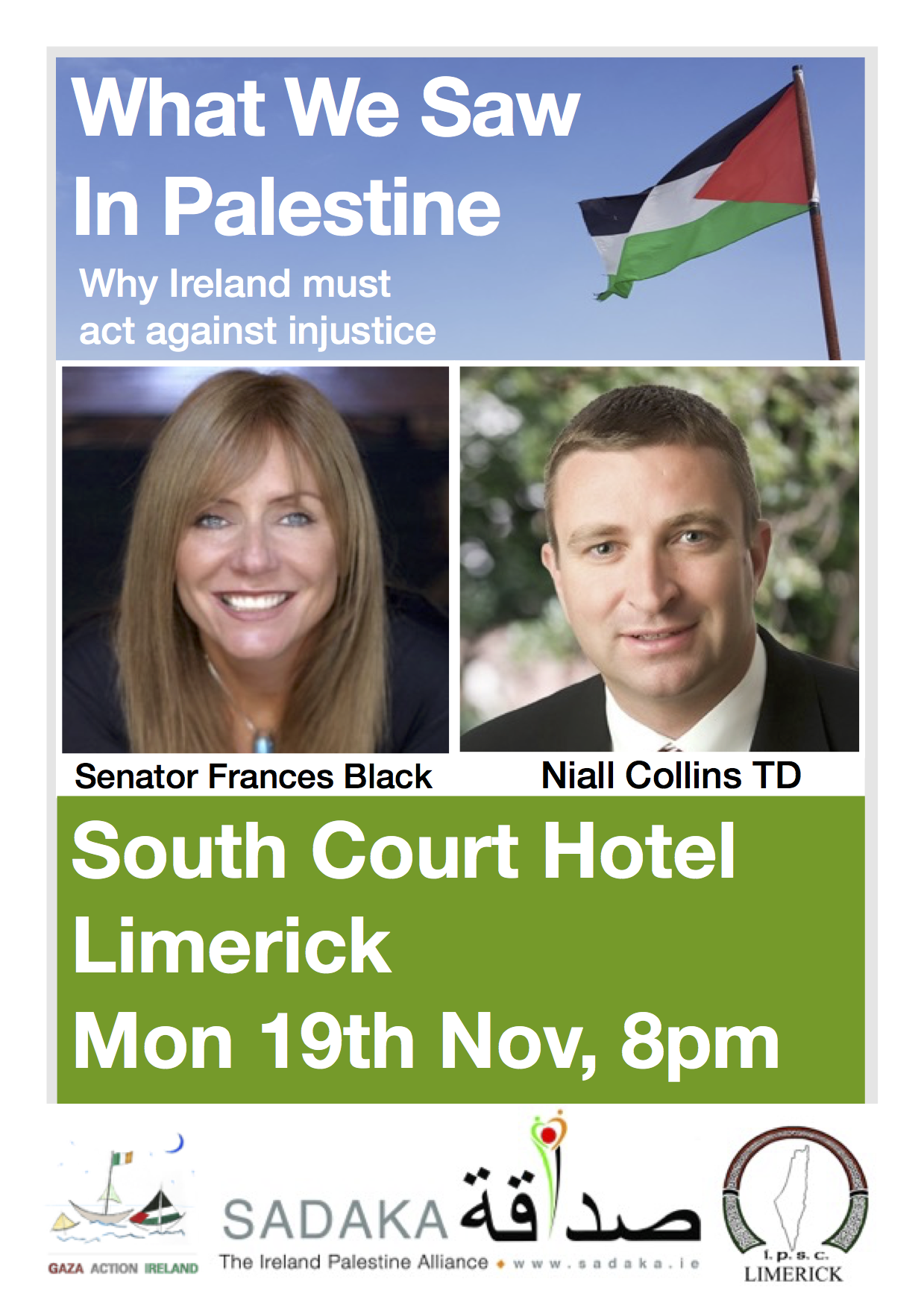 Senator Frances Black and Deputy Niall Collins will be joined by Dr. Susan Power at the Limerick Public talk on Palestine.

They will be joined by Dr. Susan Power, originally from Cork but based in Ramallah, Palestine. Dr. Power is the Head of Legal Research & Advocacy with Al-Haq, one of the biggest human rights organisations in Palestine and a consultative NGO at the United Nations. When Senator Black visited Palestine in May, and Deputy Collins in June, Dr. Power briefed both Members of the Oireachtas and brought them to tour the illegal settlements.

The Occupied Territories Bill 2018 was proposed by Senator Black and is supported by Fianna Fail, Labour, Sinn Fein, The Green Party, Social Democrats & several Independents. Only Fine Gael have opposed the bill.

It passed a historic first vote in July and returns to the Seanad in November. Israel has occupied the Palestinian ‘West Bank’ since 1967 and has since transferred over 600,000 of its citizens into illegal settlements in that territory. This has been facilitated by the confiscation of over 40% of the available land and severely reduced the land available for agriculture, housing and basic services. It has caused immense suffering and a deteriorating human rights situation on the ground, particularly due to restricted access to water and electricity.

The bill has been drafted with the oversight of the Office of the Parliamentary Legal Advisor (OPLA) of the Houses of the Oireachtas, and the formal legal input of Michael Lynn (Senior Counsel in Ireland) and Professor of International Law at Cambridge University James Crawford (Senior Counsel in the UK).

For more information on The Occupied Territories Bill 2018 go here

For more stories on Public meetings in Limerick go here