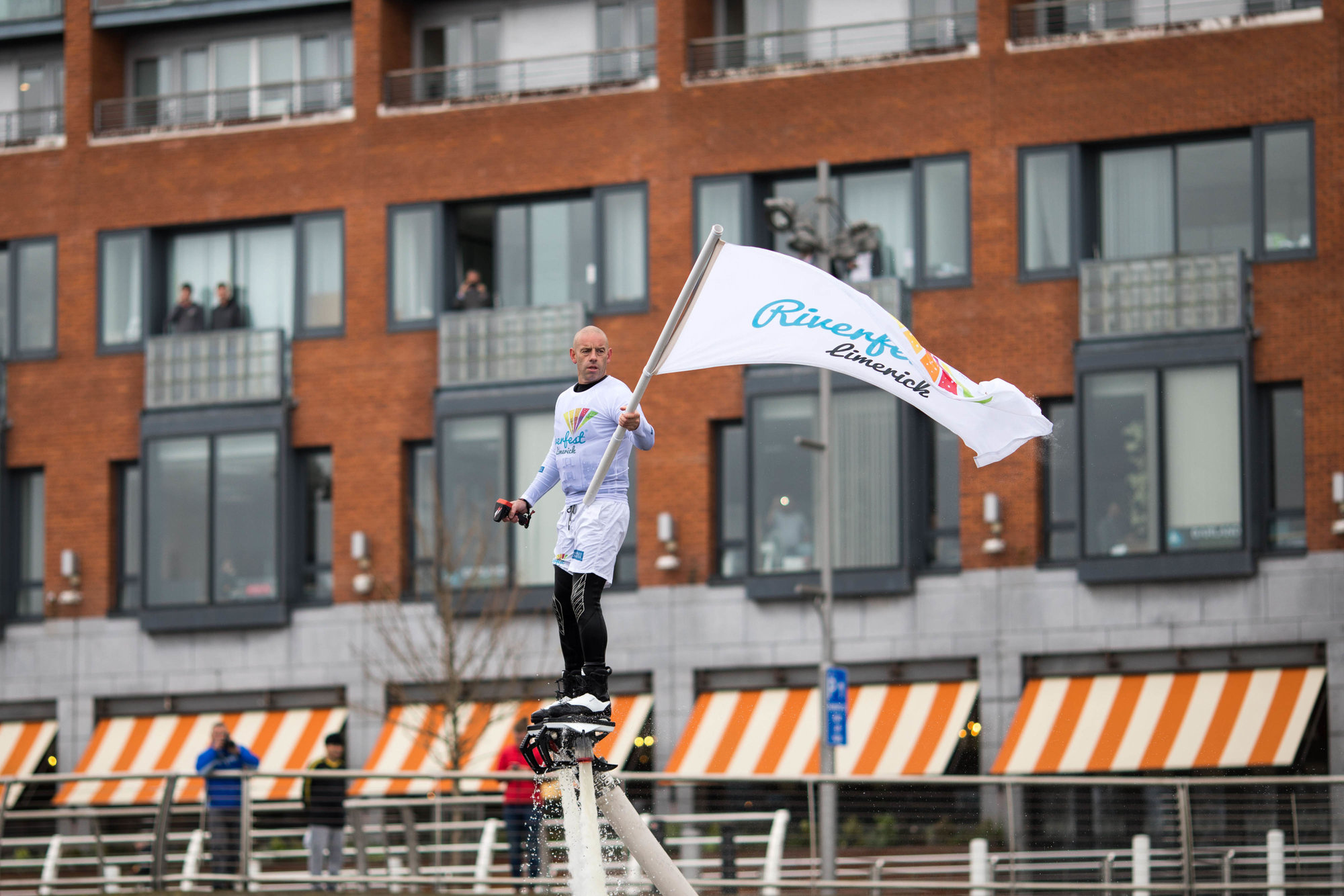 Limerick’s majestic River Shannon will take centre stage for the May Bank Holiday weekend with action packed aquabatics by some of the world’s best water performers and a dramatic fireworks night show for Limerick Riverfest 2017.

Thousands of visitors are set to attend Riverfest, Ireland’s first major festival of the summer with Limerick becoming a mecca for families, foodies, runners and water sport enthusiasts over the May Bank Holiday weekend (28th April to 1st May).

Some of the world’s best jet boarders including Scott Knemeyer, Bo Krook and Irish champion wakeboarder David O Caoimh will perform as part of the Maldron Hotel Limerick Riverfest 2017 on the Shannon.

Members of the public brave enough will get the chance to fly over Ireland’s longest river on a Zipline, daily at Arthur’s Quay, where the Riverfestival Village will be a focal point for all the family with vintage amusements for children along with craft, food and retail stalls.

Ireland’s largest BBQ cook-off also dons its chef’s hat to the river and moves onto the boardwalk at Harvey’s Quay, providing a beautiful backdrop for one of Riverfest’s favourite events.

Exciting and skilful displays by Limerick Marine Search and Rescue, the Defence Forces, Foynes Yacht Club, Limerick’s numerous rowing clubs and yachting and sailability groups will mean all eyes will be firmly focused on the water.

Clancy’s Strand and Honan’s Quay will be the best viewing points on Sunday evening as acrobatic jet boarders and jet skiers will perform with LED lights and flares to make the traditionally spectacular fireworks display the best ever.

Limerick Riverfest 2017 weekend will also see thousands of runners and walkers come to the city to participate in the Barrington’s Hospital Great Limerick Run which takes in many of the historical and scenic sights across Limerick, on Sunday April 30.

The run features entries from all across Ireland and overseas with participants entertained by various musical acts along the route of the marathon, half marathon and 6-mile events.

Speaking at the launch of Limerick Riverfest 2017 at House Limerick on Honan’s Quay today (Tuesday 4th April 2017), Mayor of the City and County, Cllr Kieran O’Hanlon said: “Riverfest has become a firm favourite of Limerick people and of those from further afield on the May Bank Holiday weekend in what is the 13th year of this spectacular festival when Limerick is the only place to be that weekend. The festival provides a wonderful opportunity for us to focus one of Limerick’s greatest assets – the River Shannon.”

“I’m delighted with the range and breadth of the events taking place during Riverfest.  I’m heartened to see the famous BBQ is embracing the river and will be located on the wonderful boardwalk at Harvey’s Quay. The Riverfestival Village means that families and other visitors have a wonderful place to relax and enjoy the amazing Maldron Hotel Riverfest on the Shannon jet boarding and other displays on the river.”

“Riverfest is Limerick’s summer festival that is becoming a favourite of people around the country, let’s make it the best one ever!”

At a glance: Highlights of the four-day festival include:
Fashion Friday at Arthur’s Quay Shopping Centre hosted by style icon Celia Holman Lee and presenting the latest trends for Limerick designers and stores on Friday 28th April.
Ireland’s largest BBQ cook-off, the Riverfest BBQ Competition will be a feast for the senses on Saturday, April 29, at its new location at Harvey’s Quay boardwalk
The Riverfestival Village returns with treats for all the family.  Food, craft and retail stalls along with vintage amusements creating a unique atmosphere at Arthur’s Quay Park, running daily!
The Maldron Hotel Riverfest on the Shannon will see spectacular and daredevil performances by some of the world’s best jet boarders and wakeboarders, including Scott Knemeyer, Bo Krook and David O Caoimh.  Auther’s Quay Park will be the ideal vantage point to watch the many water based events on Friday 28th to Sunday 30th April including a sailing regatta, rowing, kayaking and a Defence Forces display.
A new Zipline will be in operation over the four days of the festival allowing members of the public to soar high about the river as they travel from Arthur’s Quay to Honan’s Quay.
Jet boarders and jet-skiers will add even more colour to the spectacular fireworks display which will light up the Limerick skies on Sunday 30th April from 10.15pm.
Riverfest also has fantastic fringe events including comedy, theatre, gigs, carriage, walking and cycling tours, sport and markets running throughout the weekend at various locations across Limerick.

Laura Ryan, Head of Communications and Marketing, Limerick City and County Council added: “The May Bank Holiday weekend always is a sellout for accommodation providers in the city giving a huge economic boost on what is undoubtedly the busiest and best four days in Limerick showcasing all that’s great on the key bank holiday weekend of the summer.  Last year Riverfest generated far in excess of what was anticipated and we’re looking forward to another fantastic festival this year with an outstanding programme of events.”

Sheila Deegan, Limerick Arts Officer said: “The continued development and investment in Riverfest shows Limerick’s desire to grow our visitor offering.  Riverfest is one of the civic festivals delivered by Limerick City and County Council to bring the May Bank Holiday Weekend to life in the city and celebrate the river.”
“Additional elements such as the Barrington’s Hospital Great Limerick Run, Live at the Castle and a host of other fringe events show the potential of Limerick to be the best city of celebration in the country on the May Bank Holiday weekend.”

To find out more about Limerick Riverfest 2017, please click here.

To read stories about past Limerick Riverfest, you can click here.