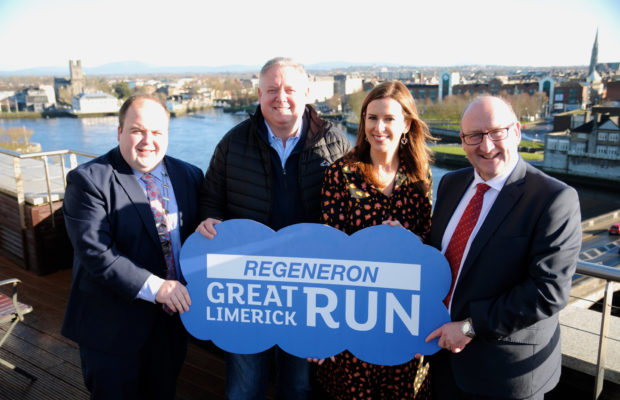 Thursday, 12 March 2020:  The organisers of the Regeneron Great Limerick Run and the Bon Secours Hospital Limerick Run for Fun announced today that the May Bank Holiday weekend event has been rescheduled to the first weekend in October in the interest of public health.

Announcing the decision, Event Director John Cleary said that the decision was taken following consultation with the health authorities and is fully supported by all partners involved, from sponsors to regional stakeholders.

“We did not take this decision lightly but have no doubt that it is the appropriate thing to do.  Public health must come first. The health of the 14,000 participants and the thousands of others who come to Limerick over the May Bank Holiday weekend to enjoy these great events on the Saturday and Sunday is our primary concern in making this decision.

“We now fix our thoughts on October 3rd and 4th next when we will be at the starting line for the 2020 Regeneron Great Limerick Run and the Bon Secours Hospital Limerick Run for Fun. The sense of anticipation and excitement from participants for the event will be heightened by the wait.  We look forward to its success and a significant final quarter economic boost for Limerick,” he said.

Niall O’Leary, Vice President and Site Head Regeneron Raheen, said “The decision to reschedule the event is fully supported by Regeneron. The safety of all spectators and participants is of the utmost importance to us. As the proud sponsor of the Regeneron Great Limerick Run, we want all involved to have the best and most memorable race experience. We look forward to hosting a great event in Limerick this October.”

Said Jason Kenny, Bon Secours Hospital Limerick Manager: “As a major healthcare provider in Ireland, we fully support the decision to reschedule this event. Public health is the single biggest priority now and must outweigh all other considerations.  We have no doubt that the Fun Run and wider weekend will have a hugely positive impact for the region on the first weekend in October.”

Up to 15,000 people are expected to register for the 2020 Regeneron Great Limerick Run, the largest amount ever to take part in the event, which will take place on Sunday, May 3 2020.

The 2020 version of the single biggest mass participation event outside of Dublin was launched on Monday, January 20, by Deputy Mayor of the City and County of Limerick, Cllr. Adam Teskey who said that everything suggests the organisers and sponsors are set to take the run to another level across the next decade.

Speaking at the launch at the Limerick Strand Hotel, Deputy Mayor Teskey said the Regeneron Great Limerick Run has become more than a race as it has brought huge numbers to Limerick from abroad and across the country.

“It has opened a lot of eyes to the new energy of this great city and its boost to the economy over the course of the May Bank Holiday Riverfest weekend is fantastic. We are incredibly grateful to the organisers of the event, for their contribution to the transformation of Limerick, for helping spread the word and bring so many people to the Mid-West. To coincide with Limerick as European Green Leaf City for 2020, I would also like to congratulate the organisers for putting a greater emphasis on making the run more environmentally friendly. And I know that a huge amount of people have already registered and are in training for the run so best of luck to those who will be on the start line on the May Bank Holiday weekend.” 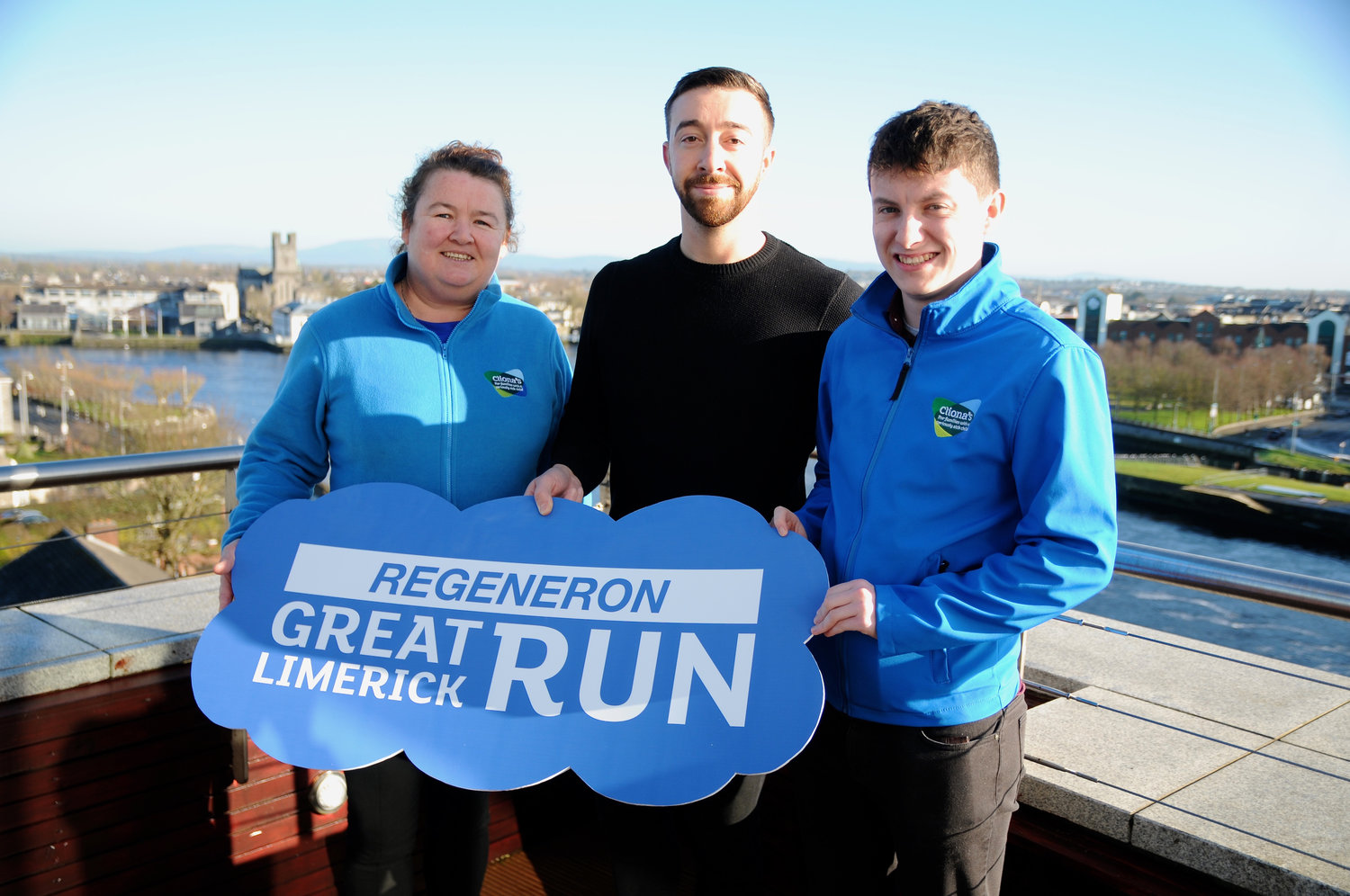 Last year’s participant numbers exceeded 13,000 thousand people for the Six Mile, Half Marathon and Full marathon. Based on the current increased level of early registrations that have taken place from those who have already availed of early bird discounted race entries over the three race distances, the event is on track to surpass last year’s total by almost 2,000 people.

A Social & Economic Impact report commissioned by Limerick City and County Council conducted by W2 Consulting estimated the event will deliver a welcome €4.5 million boost to the local economy over the course of the May bank holiday Riverfest weekend in Limerick city. It was also announced today that top artists Hudson Taylor will perform at the Big Top on the night of the 2020 Regeneron Great Limerick Run.

“We’re often described as Ireland’s sporting capital and this event showcases just why that narrative is true,” he said.

“Limerick is now being positioned as the Gateway to the Wild Atlantic Way and the Council is planning a significant promotional campaign to highlight the city and county this year. We expect that the May Bank Holiday weekend combination of the Regeneron Great Limerick Run and Riverfest will help grow visitor numbers even more for 2020  and over the coming years, and we’re delighted to support it.”

As well as being the largest mass participatory event outside of Dublin, the Regeneron Great Limerick Run is designated as an annual ‘Tier One’ event in the Mid-West region.

Speaking at the launch of the 2020 event today, Race Director, John Cleary welcomed the continued title sponsorship of Regeneron and also confirmed that the Munster Athletics Council has again designated both the Marathon and Half Marathon as their official Munster championship races. This designation, which will entice higher numbers of competitive athletes chasing personal best race times, is a reflection on the growing status of the Regeneron Great Limerick Run as a premier running event.

“I also wish to acknowledge the huge levels of support from the people of Limerick and beyond who have demonstrated in numbers both participating and watching year on year that the Regeneron Great Limerick Run is now a firm favourite on the Irish sporting calendar,” he said.

“The public-private partnership model has allowed us as race organisers to deliver a world-class event to Limerick with an economic value estimated now in excess of €4.5 million, according to the latest Council’s Sport Social & Economic impact report.  The support and commitment of our title sponsor Regeneron, together with Limerick City and County Council and other commercial and statutory sponsors, reflects the confidence that all stakeholders and partners have in the future growth potential of the event.”

In anticipation of the increased demand for places in the children’s ‘Bon Secours Hospital Children’s Run for Fun’ which takes place at the University of Limerick on Saturday, May 3, 2020, capacity has been extended to accommodate 3,500 children which are now the largest children’s event nationally.

From the inaugural race in 2010, over 83,000 people have crossed the finish line raising €2.7 million for various charities while simultaneously contributing €25.5 million to local and regional business. To date, the event has raised thousands for those primary schools with participating children.

Some of the extensive list of 2020 Nominated Charities Include

Interesting statistics on the Regeneron Great Limerick Run to date include:

Over 230,000 people have cheered runners and walkers along the race routes.

On average 4,500 bed nights are created with 100% hotel occupancy on the night before the event with the average length of stay by those outside the region = 2 nights

75,000 hours of physical activity is generated as a direct result of the Regeneron Great Limerick Run

49.6% of participants claim the event was the main reason why they started exercising.

91.1% rated the event as having a high impact on Limerick as an event hosting destination

375,000 bottles of water have been used by participants in the last five years.

An estimated 570,000 miles have been completed by participants since the inaugural event in  May 2010.

For full details on how to enter the Regeneron Great Limerick Run please click here.