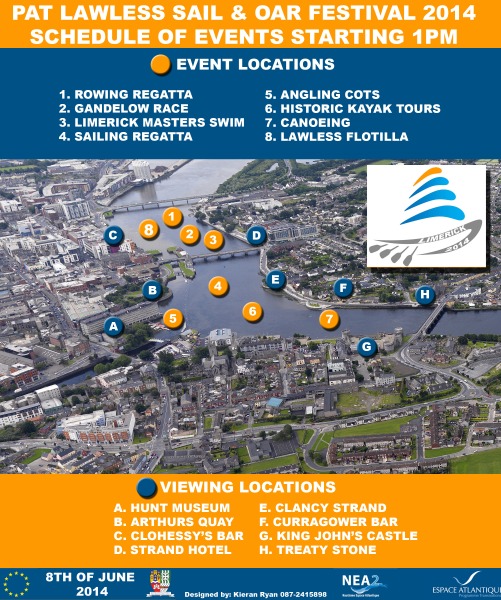 The ‘Pat Lawless Sail and Oar Festival’ will celebrate Limerick’s status as a riverside city and will feature a series of events on the River Shannon.

A new festival named in honour of a Limerick man who famously completed a solo circumnavigation of the world will take place along the banks of the River Shannon in Limerick City on Sunday June 8th next.

Organised and funded by the Mid West Regional Authority (MWRA) through its participation in a European Programme for developing and promoting the watersports sector in Europe’s Atlantic Area, the ‘Pat Lawless Sail and Oar Festival’ will celebrate Limerick’s status as a riverside city and will feature a series of events on the river.

For spectators gathered on either side of the river at Harvey’s Quay and Clancy Strand, there will be Rowing and Sailing Regattas, a historic kayak tour of Limerick City and a Gandelow boat demonstration as well as the Limerick Masters Swim.

The late Pat Lawless made international headlines in 1996 when the then 70-year-old sailed his 30-foot vessel, the Seadog, up the Shannon Estuary on the final leg of his 30,000-mile around the world voyage. Mr. Lawless, who was from the South Circular Road and was a member of the Iniscealtra Sailing Club in Mountshannon, passed away in 2010.

Majella O’Brien, EU Projects Officer with the MWRA explained that the upcoming festival is part of its ongoing efforts through the NEA2 project to develop and promote the watersports sector in the Mid West Region.

“Lough Derg, the River Shannon and the Estuary are intrinsically linked with the economic and social history of this region. The potential of these waterways for tourism development remains underexplored however. By hosting the ‘Pat Lawless Sail and Oar Festival” we want to demonstrate this potential to our European project partners,” she said.

Ms. O’Brien continued: “Through our participation in the NEA2 programme and by working in conjunction with other regional development agencies, the MWRA will continue to look for new ways that this region can build on existing marine leisure initiatives to help inform and develop new opportunities for sustainable development of water sports on our rivers, lakes and coastline. In doing so, we could attract thousands of additional visitors to the Mid West Region each year.”

“We are particularly delighted to be able to host a river festival in honour of Pat Lawless whose crossings of the Atlantic Ocean and solo circumnavigation of the world brought great pride to Limerick and the wider region. Pat also remains an example to everyone that it is never too early or too late to develop an interest in watersports or marine based recreational activity considering his own life long love of sailing and a member of the Lough Derg based Iniscealtra Sailing Club,” she concluded.

The ‘Pat Lawless Sail and Oar Festival’ takes place in Limerick City on Sunday June 8th next. The event is sponsored by the NEA2, an Interreg IVC Atlantic Area project.

Photos by Chris Luszczki for ILoveLimerick.com 2014. All Rights Reserved