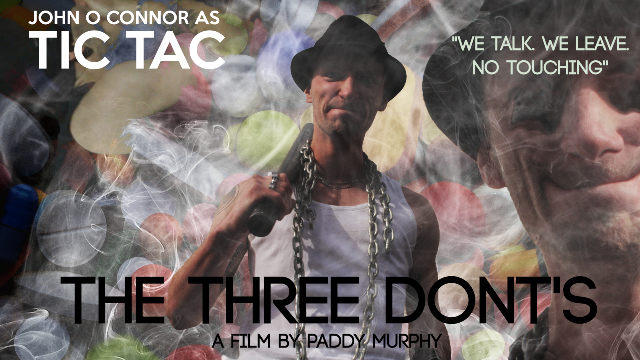 The public screening of The Three Donts will be happening on Thursday the 10th of September in the Odeon Cinema in Castletroy, Limerick between 7:30 & 9 PM with some additional footage, such as behind the scenes clips on show too.

There is no entry fee to the event with cast and crew in attendance and the public invited to partake in the viewing of The Three Donts on the second biggest screen in the Odeon Cinema.

Paddy explains how The Three Donts came about: “Since January of 2014 I returned to my first love – writing. It was while working with Steve Spade, local magician, that I got the push to turn an award winning short story of mine, Ensnared, into a film. I helped Steve set up his production company, Spade Lion, from May 2014 – May 2015, where I wrote and directed 3 short horror films. Ensnared starring Kevin Kiely Jnr. (The Dark Knight Rises, World War Z), Devil on my Back starring Limerick legend, Nigel Mercier (Glenroe, Cowboys & Angels, Love/Hate) and Abigail Jean Hibbert & Ground Floor, featuring Steve Spade and Canadian scream queen, Tristan Risk (American Mary, The ABC’s Of Death 2). These three psychological horrors comprised a near feature length showing called The Psychosis Trilogy that screened in Limerick & Dublin earlier this year.”

“Since leaving Spade Lion in May I’ve been working independently on my own films and with others. Following the screening of The Psychosis Trilogy a local musician, Brian Russo Clancy, approached me about a concept he had for a film, set in Limerick, called The Three Don’ts. The dark humour really appealed to me and I went home and wrote the 27 page script over night. Together we mounted the  biggest (and best) crew I’ve ever worked with and shot The Three Don’ts over the course of a month. It’s a 30 minute short with some great comedy and dark themes.”

“The Three Donts tells the story of Benson (played by rapper, Nathan Wong) and Jason (Brian Russo Clancy, Concept creator) – two relatively naive lads who want to make some quick cash. Benson has found an opportunity and while Jason doesn’t exactly feel that it’s above board, he too is desperate to make some bucks to pay his college tuition. It’s then that they meet their employers – three shady characters led by the enigmatic and intimidating Banger (Adam Moylan, Vikings, Ground Floor, Filibusters Killer Joe). Banger is flanked by two bizarre and clearly insane henchmen – Madman (Aaron Walsh)  and Tic Tac (John O Connor). Banger informs the lads of their work – “It’s a simple aul’ job, any aul’ fool could do it” he states – however, he does tell them to follow The Three Don’ts and they’ll be fine.”

What are The Three Donts? Well, you’re going to have to come down to the Odeon on the 10th of September, between 7:30 & 9 PM to find out!

Watch Paddy’s showreel featuring clips from The Psychosis Trilogy, I Love/Need You and The Three Don’ts below.

Discovering the benefits of Nature by Albert Nolan