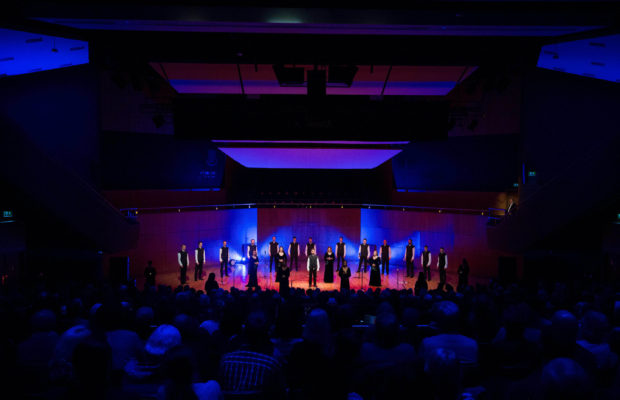 The annual Limerick Sings International Choral Festival 2018 takes place from Thursday 7 to Sunday 10 June with choristers from the US, Iceland, Norway, and Estonia joining local and national choirs for a weekend of song throughout Limerick City and County.

The 4-day, non-competitive choral festival, now in its sixth year, presented by the University Concert Hall and Campus Life Services, will feature four principal concerts together, with workshops, choral trail performances and a special outdoor event in Lough Gur.

A concert by all-male vocal group M’ANAM will open the festival on Thursday, June 7 at the University Concert Hall.

A concert by all-male vocal group M’ANAM will open the festival on Thursday, June 7 at the University Concert Hall.

M’ANAM (translated from the Irish language to ‘My Soul’) has grown naturally out of the extraordinary vocal ensemble that is ANÚNA. This début performance by the group will incorporate some well-known material such as Fionnghuala and The Parting Glass, together with some of the expansive and virtuosic repertoire that is the distinguishing feature of M’ANAM, such as Gúnnarsholmi – a setting from the Icelandic tradition, and Bandó Ribineann which belongs to the Scottish tradition of Mouth Music.

On Friday, June 8, the beautiful Redemptorist Church will provide the setting for Choirs in Concert, with local, national and international participating choirs performing a diverse programme of sacred, traditional and folk music.

The Limerick Sings International Choral Festival 2018’s Gala Concert takes place in the University Concert Hall on Saturday, June 9. This concert forms part of the venue’s 25th Anniversary celebrations and promises to be a high point in the calendar of all choral music fans.  This prestigious concert will feature a joint performance of visiting choirs from the USA, conducted by the acclaimed Dr. Jeffrey Redding and accompanied by the Limerick Chamber Players.

The concert will also feature a keynote address and performance led by renowned, Grammy-award winning US composer and conductor Eric Whitacre, whose four “Virtual Choirs” have been viewed over 15 million times on Youtube. Limerick Youth Choir, conducted by Eric Whitacre, and the prestigious Limerick Choral Union will also perform in the Gala Concert.

The Limerick Sings International Choral Festival 2018 will come to a rousing close on Sunday, June 10 with a delightful Proms Concert in the picturesque Adare village as local and visiting choirs perform varied, light programmes in Holy Trinity Abbey Church making it a wonderful family afternoon.

As well as the four featured concerts, this year’s festival will also include a much anticipated 2-hour workshop with Eric Whitacre. Singers can join the acclaimed conductor for a reading session during which he will share his insights and inspirations. The session will include an informal Q&A and attendees will also make up the demo choir.

A fun Choral Trail in Limerick City and an Outdoor Chorus in the stunning surrounds of Lough Gur are other exciting elements of these four days of song in Limerick.

The Outdoor Chorus, which takes place late on the morning of Friday, June 8, will see both visiting and local choirs come together under the baton of ANÚNA’s Michael McGlynn to perform one of the composer’s own iconic pieces – with the beautiful, ancient amphitheater of Lough Gur providing the backdrop.

A number of free performances throughout Limerick City and County on the Saturday morning and afternoon will make up this year’s fun Choral Trail.