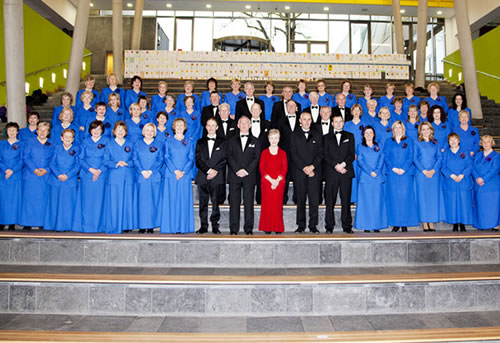 Limerick will welcome choirs from across the world and showcase its proud tradition of choral singing at the inaugural Limerick Sings International Choral Festival which the city will host in June 2013. It has been announced that hundreds of choristers from all over Ireland, Europe and the US will take part in the event. The new festival will take place in Limerick during the June Bank Holiday Weekend – Friday, May 31 to Sunday June 02, 2013. Local, national and international choirs will come together for a weekend of non-competitive singing, tours, excursions and fun as part of Limerick Sings. “We are delighted with the reception that this new and exciting festival for the city has been receiving,” said event manager Dolores Hanly. “Limerick is known for its strong chorale tradition and beautiful musical venues, it is a great opportunity for us to share this with local, national and international audiences and we’re confident that this inaugural celebration will become a regular annual event celebrating choral music on the city’s festival calendar.”

In return for filling the city with song, an exciting and fun packed weekend will await the visiting choirs. They will be greeted by choral and city ambassadors on arrival at their chosen accommodation and can go on the city walking tours, perform at St. Mary’s Cathedral and maybe even take part in some impromptu singing throughout the city!

“Some say Limerick’s heart may belong to sport, but its soul is singing and this is set to become a wonderful addition to the city’s impressive festival line up for 2013,” said Mayor of Limerick, Cllr Gerry McLoughlin. “Music is a universal language and I would like to offer the warmest of Limerick welcomes to the visiting choirs who will enjoy and share in the choral spirit very evident in this city. I know that the experienced team behind the festival will do a terrific job hosting a series of wonderful concerts and showcasing the city’s venues. With 2013 unveiled as the Year of Gathering and Limerick set to become the first National City of Culture 2014, I can think of no better way to bring the city to life than with a celebration of wonderful choral music.”

During the three day festival there will be tours throughout Limerick and to nearby Bunratty Castle and Folk Park, the Burren and the Cliffs of Moher all just a short drive from the city. On Sunday morning, June 2nd 2013 , church goers will be in for a pleasant surprise as some of the visiting choristers will join local choirs for short performances at morning church services.

The festival will come to an epic conclusion on Sunday afternoon when all the choirs join forces and raise the roof of the University Concert Hall for the ‘Big Sing’. As the concert ends but the music lingers on, participants will enjoy a ‘Big BBQ’ at The Stables in UL.

The evening will end with more joyous singing at the hotels and possibly in some of Limerick’s great pubs!

The festival evolved from an initial meeting with local hoteliers and was facilitated by Fáilte Ireland through its sales connect programme.

For further information on the festival please visit www.limericksings.com