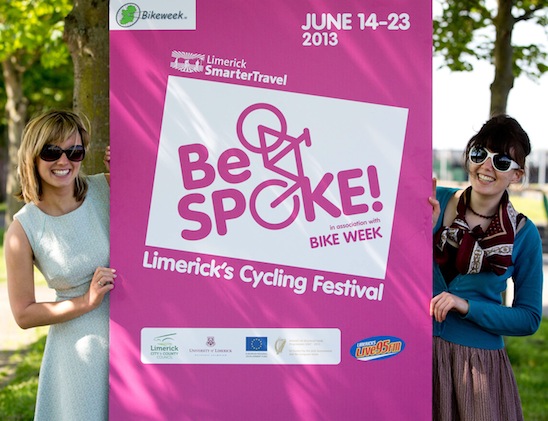 Limerick’s inaugural BeSPOKE Festival celebrating Bike Week 2013 is presented by Limerick Smarter Travel and will run from June 14th-23rd and will feature up to 30 events including an interview with cycling legend Greg LeMond. Pictured at the event were Aisling Joyce and Marion Dineen, Limerick Smarter Travel. Pic Sean Curtin Photo.

Bike Week 2013 is a Department of Transport, Tourism and Sport piloted national initiative featuring cycling events all over the country and Limerick celebrated with the inaugural BeSPOKE Festival, hosting up to 30 events.

Limerick’s Bike Week 2013 took place from Friday 14th to Sunday 23rd June and got off to an impressive start with a public interview with American former professional road racing cyclist Greg LeMond on Friday 14th June at 8pm in the Lime Tree Theatre with a high percentage of ticket sales going to the Get BACk Challenge Charity.

Limerick City has been designated as one of three centres in Ireland that have become Ireland’s First Smarter Travel Demonstration Areas. One of the methods of promoting the Limerick Smarter Travel initiative is through Bike Week 2013 which will feature a huge variety of events throughout Limerick, held in partnership with Limerick City and County Sports Partnerships and An Taisce Green Schools.

Pat O’Neill, Senior Engineer Limerick City and County Council said: “Limerick Smarter Travel was delighted to announce the BeSPOKE Festival as part of National Bike Week 2013. During the week we had an exciting array of events throughout the city and county and no matter what your age, size or fitness level there was an event for you with lots of prizes and absolutely free.

“The range of events offered catered for all cycling abilities and the week came to a climactic end with the Bicycle Parade on Sunday 23rd June at 12 noon from City Hall to the People’s Park. The flagship event was open to cyclists of all ages and abilities and fancy dress was recommended!

Mayor of Limerick Cllr. Gerry McLoughlin is an avid cyclist who regularly cycles to work. “I cycle because I really enjoy it, but also I am very aware of my carbon footprint and the bike is kind to the environment. As a sport lover I see it as a way to stay fit and healthy so my vehicle of choice for city movement is the bike and I would recommend that everyone, especially families supported the Bespoke Bike Festival and beyond!” Mayor McLoughlin said.

Limerick’s submission to become one of Ireland’s First Smarter Travel Demonstration Areas was ranked first of all submissions received by the Department of Transportation from the local authorities in Ireland.

As Demonstration City, Limerick will receive funding of €9million over five years to roll out a wide range of measures and interventions targeted at encouraging people to use more sustainable modes of transport and to engage in transport planning. The Limerick Smarter Travel scheme is an initiative of the Limerick Local Authorities in partnership with the University of Limerick.

Over twenty weeks, 30 Limerick locals are incorporating a mix of walking, cycling, car sharing and using public transport into their daily routine. The campaign is running in partnership with the Graduate Entry Medical School and Physical Education and Sports Sciences department in the University of Limerick. Over the coming months, a medical team will monitor the health and wellbeing of the champions as they incorporate smarter travel into their daily activities. The experiences of the champions will be documented by Limerick Smarter Travel who will be releasing champion profile videos like this throughout the summer. The launch of a short film documenting the campaign will be the highlight of the upcoming European Mobility Week festival September 2013.

Limerick Smarter Travel is a collaborative team from the City Council, County Council and the University of Limerick. Limerick City has been designated as one of three centres in Ireland that are to become Ireland’s first Smarter Travel Demonstration Areas.
The Limerick submission was ranked 1st of all submissions received by the Department of Transportation from the local authorities in Ireland. As Demonstration City, Limerick will receive European Regional Development Funding of €9million over five years to implement a wide range of measures and interventions targeted at encouraging people to use more sustainable modes of transport and to engage in transport planning. Changing the way people think about travel can make a significant improvement to Limerick City and act as an example for the rest of Ireland in changing travel behaviour.