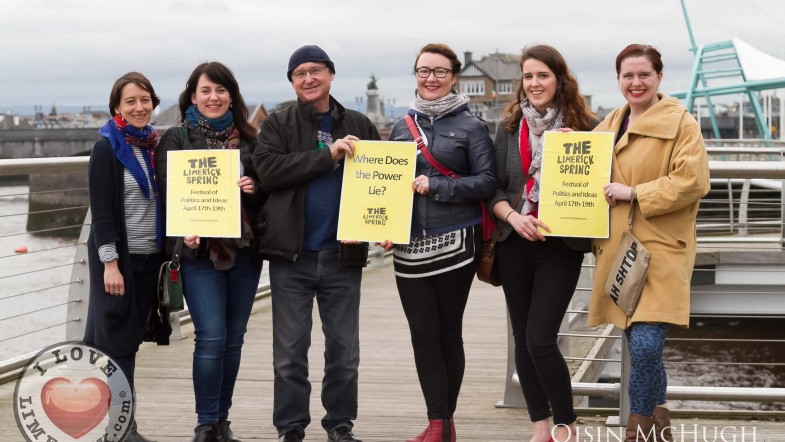 The Limerick Spring Festival 2016 of Politics and Ideas celebrates the role of the citizen in political life. The theme of this, our third year of the festival is ‘The State of Us’.

As a voluntary, non-profit and citizen-run festival, The Limerick Spring has evolved since 2014 as a dynamic, responsive and inclusive politics and ideas festival that is now seen as a regular feature on Limerick’s social, political and artistic calendar. This year, audiences can look forward to 13 events taking place in venues all over the city. The festival features a mix of lively debate, provocative film screenings and rousing protest music along with a smattering of satire, people’s poetry, children’s art and even a tasty political brunch! All events encourage audience participation.

Marking the commemoration of the 1916 Rising we will take time to reflect on the state of the nation and of politics in Ireland. We are envisaging a series of events that both remembers and celebrates the principles enshrined in the 1916 proclamation -those of equality and civil liberty but also questions.

With 100 years of perspective, the festival will challenge speakers, participants and audiences alike to debate and discuss society and political life in Ireland, to question our progress, our evolution, to ask what we’ve learned and what we’ve left undone since the Proclamation of our Republic.

During the festival we will also look to the future. What might the next 100 years of Irish society and politics look like?

In Limerick Spring Festival 2016 we are excited to bring you a multi-disciplinary programme of events including:

●      Workshops, debates and conversations on the big issues from housing to mental health, equality to education, feminism and more

●      An evening of song celebrating the power of protest music

●      Speakers Corner where citizens get to have their say

●      Plus we’ll have children’s art workshops, comedy events, poetry/spoken word and much more

We will launch our final programme in early Spring 2016 so keep an eye on social and local media for full details.

The motivation behind Limerick Spring Festival 2016 is to celebrate the role of the citizen in political life, and in particular to encourage the active participation of citizens in local, national and European politics.

The festival also plays host to Salon Du Chat on Thursday 21st April, a protest music concert in Dolans on Friday 22nd, a screening of The Great Wall (2015) with director Tadhg O’Sullivan and panel discussion in Belltable on Saturday 23rd and a political brunch followed by a Women in Politics event in The Strand Hotel on Sunday 24th. We proudly welcome the return of comedian and RTÉ Callan’s Kicks writer, Paddy Cullivan with his new show, The 10 Dark Secrets of 1916 (and how they Shaped Ireland on Sunday 24th April.

Festival Co-ordinator Jennifer Moroney-Ward says “Limerick has a long tradition of political activism and has played a leading role in the development of the Irish state. This festival will invite citizens and guest speakers to delve deeper into looking at where the power lies and to discuss the political structures and systems that influence our lives in 2016. We know from the last two years that there is a huge appetite for this type of event in Limerick and beyond, we just really need people to support us by buying tickets for the events or by making whatever contribution they can. ”

There really is something for everyone at the Limerick Spring Festival 2016. This is Ireland’s only Festival of Politics and Ideas so make sure you have your say and get involved