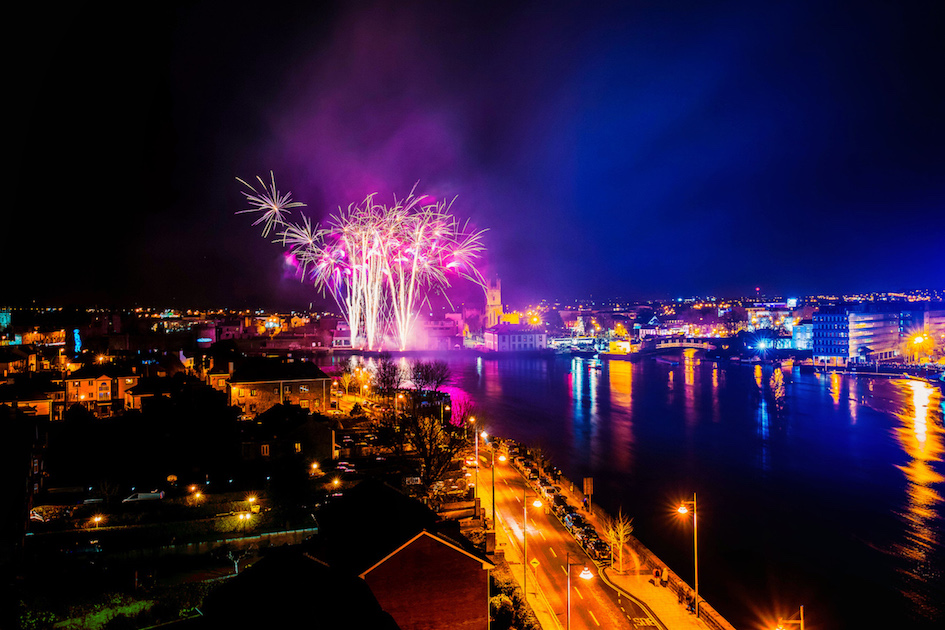 Limericks St Patricks Festival 2019 to be kicked off with fireworks

Limericks St Patricks Festival 2019 to be kicked off with fireworks

Limericks St Patricks Festival 2019 will be kicked off with fireworks, it has been announced today.

The display will take place on Saturday 16 March 2019 at 9 pm and will launch a weekend of festivities including the Limerick St Patrick’s Day Parade and the 49th International Band Championship.

A 40-metre Panoramic Wheel will also make a welcome return to Arthur’s Quay Park in Limerick city for the Festival, offering unrivalled views of Limerick city and county.

Community and voluntary groups, sporting and other clubs, as well as companies across Limerick, are being invited to enter the 2019 Limerick’s St Patrick’s Day Parade, which will be the highlight of a three-day festival extravaganza this March.

Applications are now open from groups wishing to take part in what has become the largest St Patrick’s Day Parade in Ireland outside of Dublin. The theme chosen for this year’s festival is ‘One Giant Leap’, in honour of the 50th anniversary of the moon landing and huge steps that Limerick has undertaken in transforming itself over the last number of years.

Mayor of the City and County of Limerick Cllr James Collins said: “The concept reflects the unprecedented, transformative and dynamic revitalisation that Limerick is undergoing, made possible by ambitious plans, self-belief and a collection of small and giant leaps by communities, organisations and individuals.”

“In 2019 we are asking the people of Limerick and beyond to celebrate the imagination and ambition, which acts as the catalyst for that One Giant Leap which can make the things of our dreams real and bring us towards a better brighter future. With record job creation and investment, and the social dividend that all of this brings, we are today a city that sees no frontiers and believes nothing is out of our reach. So start thinking big and join us for one day as we take to the streets and celebrate One Giant Leap!”

Thousands of people are expected to line the streets of Limerick City from midday on 17 March for one of Ireland’s largest regional St. Patrick’s Day Parades.

Prizes will be awarded for:

The parade, which is being co-ordinated by Grooveyard Productions on behalf of Limerick City and County Council, will feature thousands of participants from various community groups, companies, bands and sports clubs from across Limerick and further afield.

Sheila Deegan, Culture and Arts Officer with Limerick City and County Council said: “Limerick’s St Patrick’s Festival is one of the premier civic and cultural events taking place in Limerick, and it’s so family friendly.  The Parade will be showcasing all the various clubs and community and voluntary groups who will be taking part as well as the colourful and spectacular performances that are the hallmark of the parade in Limerick.”

“Companies are also being invited to take ‘One Giant Leap’ and enter highly creative and colourful floats based on this year’s theme.”

If you would like to participate in this year’s parade, the first step is to complete the form which can be downloaded from here.