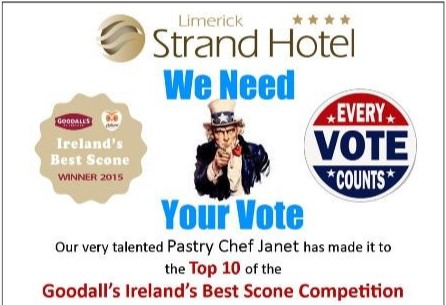 Hundreds of nominations have been received from people across the country for Ireland’s Best Scone and a local hotel, famous for its home-baked scones, has been named within the top ten.

Limerick Strand Hotel, situated on the Ennis Road, has been recommended by its customers as the place where you can enjoy Ireland’s Best Scone and the hotel will now be competing in the final for the national title.

Ireland’s Best Scone, run by Goodall’s and Odlums, two mainstays in Irish baking – has been running for four years and year-on-year, the competition has increased in terms of both nominations and votes. It’s now over to the public and a select judging panel to decide which establishment is the proud owner of Ireland’s Best Scone.

The Limerick Strand Hotel has built up a steady and loyal customer base. Asked what makes their scones so special, Pastry chef, Janet McNamara says: “At the Limerick Strand Hotel we delicately combine only the very best of local Irish ingredients every morning to make our delicious freshly baked crumbly scones. After many years of experience in a busy pastry kitchen, sometimes making up to 500 scones in one day, I firmly believe the secret is in in the mixing and definitely a woman’s touch makes my scones taste all the sweeter!”

Claire Ann McKeown, Marketing Executive at The Limerick Strand Hotel, adds: “I would like to thank all of our customers who nominated our hotel and hope that the judges enjoy our scones as much as our customers do. Winning Ireland’s Best Scone would mean the world to our hotel and it would really put The Limerick Strand Hotel on the map, so please support us and cast your vote today. ”

The ten finalists were shortlisted based on the volume of nominations that they each received and the full list of eateries can be viewed on the Goodall’s website here.

From Monday, May 25 until Friday, June 5 at 5pm, you can vote for your favourite café on the Goodall’s website with the public vote accounting for 50% of the overall score.

The remaining 50% of the score will be awarded by a judging panel which includes Catherine Leyden, Odlums’ brand ambassador; author of ‘Food from an Irish Garden’, Fiona Dillon; and winner of Goodall’s Best Scone 2014, Graham Herterich aka The Cupcake Bloke.

Commenting on this year’s Ireland’s Best Scone competition, David Egan, Brand Manager at Goodall’s adds: “We’ve been inundated with the names of cafes, restaurants and delis where people have tasted their best scone, and are thrilled to be announcing our final ten, all of which are serving up delicious scones.

“Ireland’s Best Scone gives us at Goodall’s and Odlums the opportunity to help celebrate these local gems on a national stage and we’re hoping that the public gets behind their favourite establishment this year.

In 2014, The Cupcake Bloke who trades from the SPADE Enterprise Centre and Coppinger Row Market in Dublin was crowned as the overall winner of ‘Ireland’s Best Scone’, receiving thousands of votes from the public and an overwhelming ‘thumbs up’ from the judges.

Ireland’s Best Scone will be announced at a celebratory high tea for finalists in Dublin’s Merrion Hotel. The winner will receive €1,000 and a specially-commissioned ‘Best Scone 2015’ plaque for their eatery or outlet.