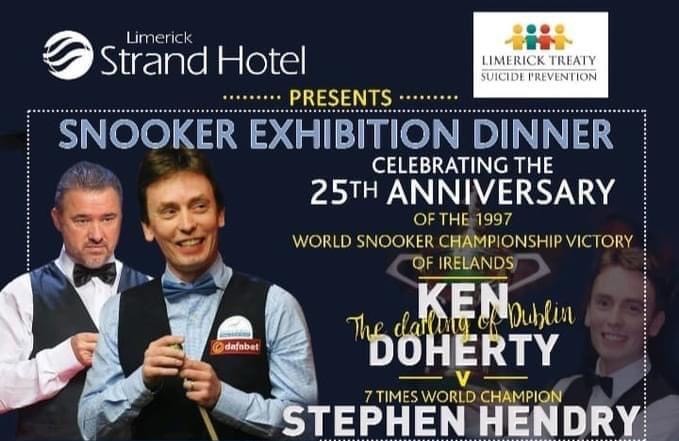 Limerick Strand Snooker Exhibition Dinner to take place on May 20

On Friday, May 20, the Limerick Strand Snooker Exhibition Dinner will be celebrating the 25th anniversary of the 1997 World Snooker Championship victory of Ireland’s Ken ‘The Darling of Dublin’ Doherty vs seven-time World Champion Stephen Hendry, in aid of Limerick Treaty Suicide Prevention.

The 1997 World Snooker Championship took place between April and May in Sheffield where Doherty became the first snooker player to win the World Championship at junior, amateur, and professional levels.

Hendry is a professional Scottish snooker player and is one of the sport’s most accomplished players. He is snooker’s youngest world champion after winning the first world title in 1990 at just 21 years old.

Virgo is an English former professional snooker player turned snooker commentator and TV personality. He is regarded as one of the most iconic voices of snooker.

Tickets are extremely limited and are €103 per person.

Tickets include a meet and greet with all 4 players, a photo opportunity with the trophy, a 3-course meal made by an award-winning chef, a snooker re-match exhibition, trick shots and impersonations, a Q&A session, autograph opportunity, and a DJ till late.

To get tickets to the Limerick Strand Snooker Exhibition Dinner, go HERE

20-year-old Limerick based basketball player Samuel Vessat has been declared for the NBA 2022 draft!