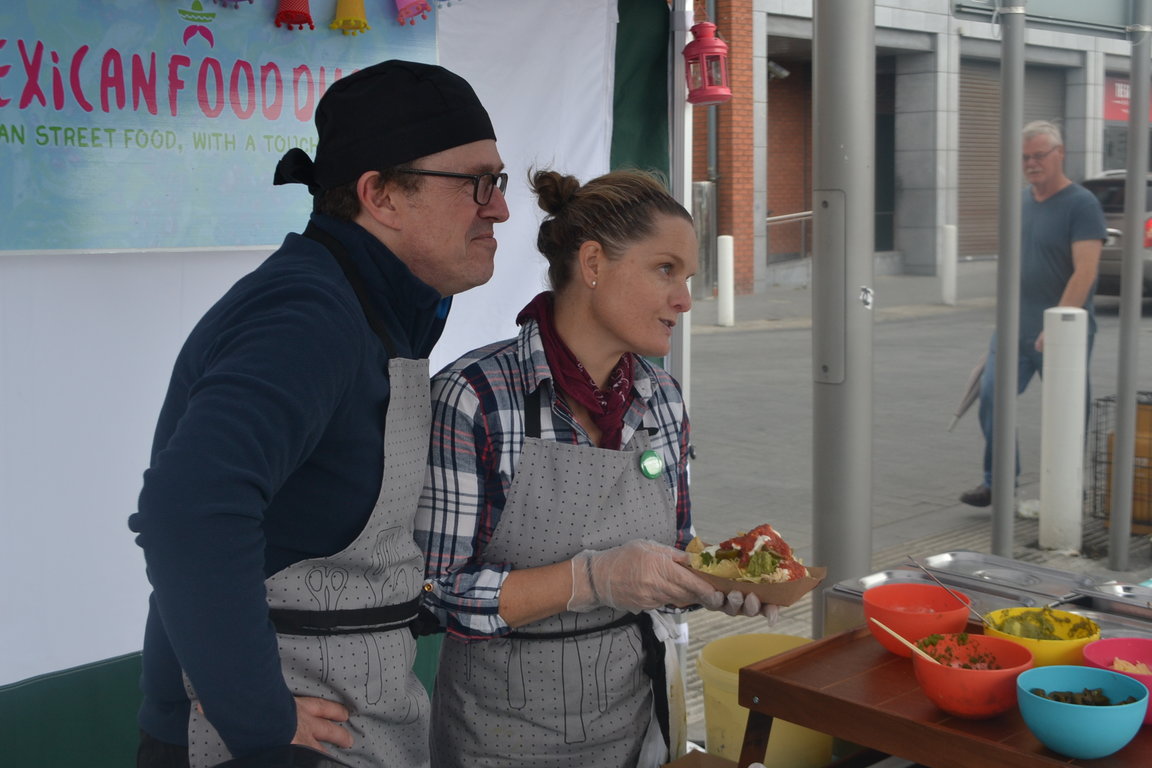 A couple of weeks ago, the Limerick Street Food Market was launched. The Street Food Market has been a great success to date and is bringing a brilliant buzz to the boardwalk by Harvey’s Quay every Wednesday from 11am-4pm. There’s such a great variety of stalls that suit every person’s taste from Turkish delicacies, BBQ Pulled Pork, vegan friendly salads, falafel wraps and so much more.

Pictured above is Alan Woods and Siobhan Downey from Mexican Food Dudes with their delicious Mexican cuisine.

To discuss the success of Limerick Street Food Market, I Love Limerick spoke to Alan Woods and Siobhan Downey from Mexican Food Dudes. These two ambitious people came together from the influence of Olivia O’Sullivan a woman who has been hugely involved in setting up the Limerick Street Food Market. Alan, who was the initiator of the food market, was trying to get a street food market set up in Limerick since late last year. He approached the County Council with the idea of a street food market and was eventually accepted.

Harvey’s Quay, a location chosen by the Limerick County Council, means that people who come to the street food market can enjoy their delicious food alongside the River Shannon on the boardwalk. There is potential Alan believes, from success, to create a similar market in a different location that could run from Monday – Friday.

Alan thinks that Limerick shouldn’t have to play ‘second best’. “I was working in France for 22 years in a food truck. I came back to Ireland last year and I approached the County Council with the idea of a street food market in Limerick because it’s part of what modern cities are all about.”

The street food market gives Limerick plenty of opportunity for tourism and bringing people into the city. Alan believes that once people get to know that there is fresh, good gourmet type food at their doorstep that it’ll definitely bring more people to the city.

Alan has always had a passion for Mexican style cuisine and has plenty of experience to deliver delicious authentic Mexican food. He started in the catering business at a Mexican restaurant while he was working to pay for his studies in the UK in the 70s. He explained that back then Mexican cuisine was very ahead of its time but now is the cuisine’s time to shine. “Irish people travel a lot, they’re aware of Mexican food and what we try to do here is create authentic Mexican food.”

If you’re interested in street food markets, Limerick Street Food Market is certainly not one to miss! Check it out every Wednesday from 11am-4pm at the Boardwalk in Harvey’s Quay where you can find Mexican Food Dudes and so many other stalls to suit your needs.

For updates on the Limerick Street Food Market click here.