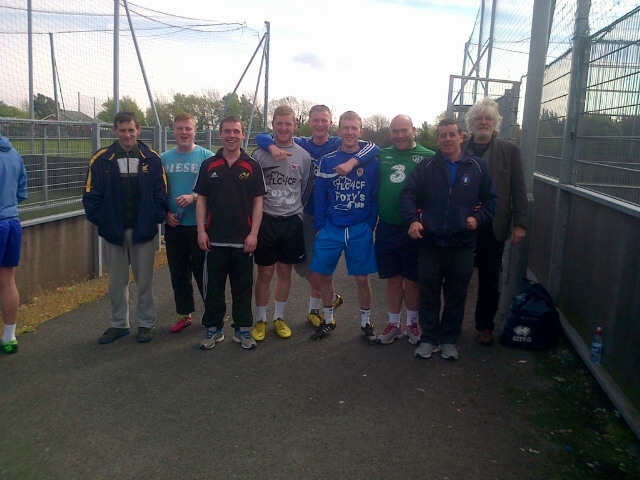 ‘Average at Best’ Team who represented Limerick at the recent National Finals in Dublin.

The Limerick Street Soccer League has been running in the Delta Sports Centre for the past 6 months. which came to a conclusion on the 30th April in the National Street League finals in Dublin, which Limerick were represented by 6 teams on the day.

The league is run by David McPhilips (CSMT), Ricky Nolan (Novas Initiatives), Paul Quigley (Novas Initiatives) and Jason O’ Connor (FAI) and is for agencies and organisations within the Limerick City area under the heading of Youth Work and Social Inclusion. The agencies and organisations represented on the day included St.Vincent De Paul, Novas Initiative, Limerick Youth Service, Garryowen Youth Diversion Project, Focus Ireland and Southill Outreach. All players and coaches who represented Limerick in the National finals played extremely well and did Limerick proud on the day.

Some of the Limerick Representatives taking part in the league.

More About The Organisations Which Run The League:

Community Substance Misuse Team (CASP CSMT) provides a free service to under 18’s and their families who are affected by substance misuse in the Mid- West region –  Limerick City, Limerick County, North Tipperary and Clare. Their aim is the provision of supports and related educational and practical interventions to support and facilitate a range of on-going services, targeted at supporting the parents, family members, partners and young people living with impact of substance misuse.

Novas Initiatives  has become one of Ireland’s main providers of services to adults who are homeless. Their client groups are among those most disadvantaged in society and include many who are not served by mainstream services and often are excluded even from existing voluntary services.  Novas works with some of society’s most marginalised individuals and they are a non-profit organisation working with single adults, families and children who are disadvantaged and socially excluded; primarily those who are homeless or at risk of being homeless. They offer bespoke, client-centred services, based on empirical evidence of more than a decade’s experience of working with people who are homeless in Ireland. They believe everyone is entitled to a home.

Bring Back Our Girls Limerick