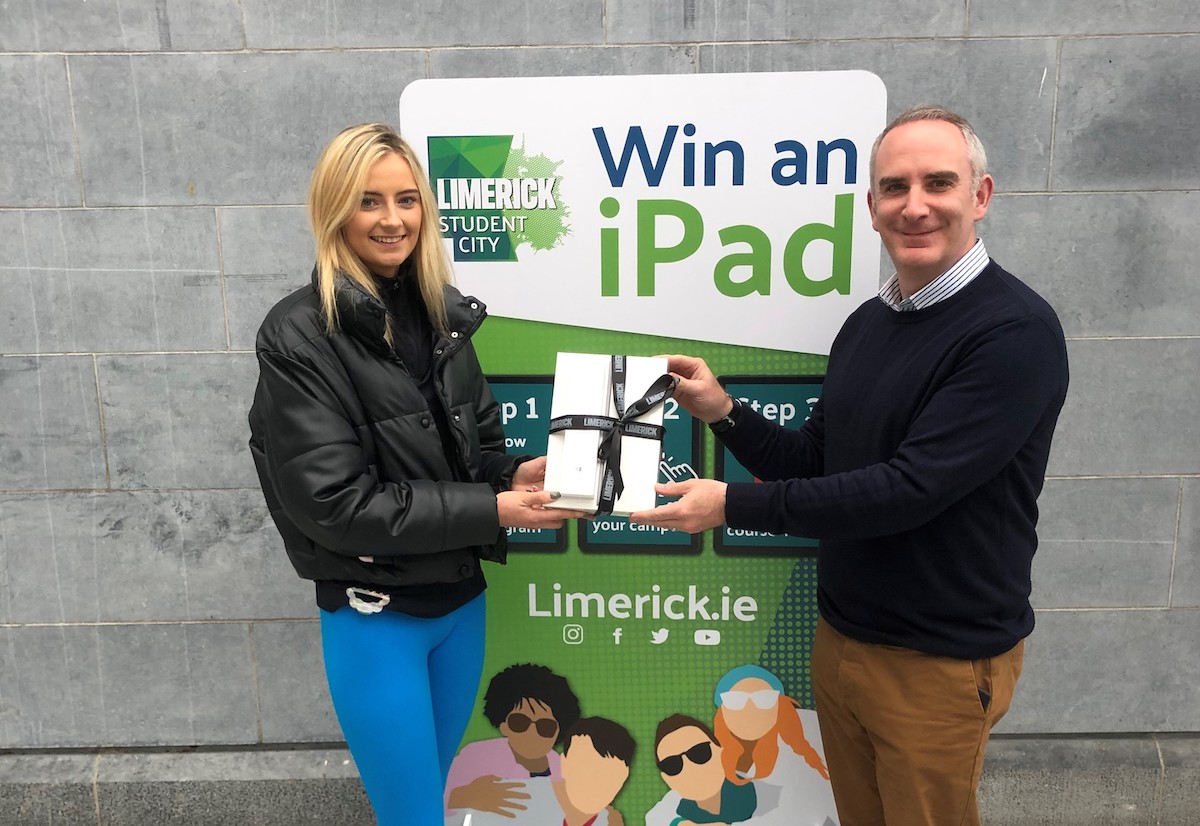 Limerick student population has now almost reached 30,000. Meaghan Gilmartin, who is a third year Early Childhood Education and Care student in TUS Moylish won the iPad competition run by Limerick.ie, pictured above with Donn O’Sullivan, Head of Marketing and Communications at Limerick City and County Council.

#LimerickStudentCity campaign gets over half a million impressions

Limerick solidifies itself as a student city with the latest Limerick student population figures showing that the city is now home to just under 30,000 students who are studying at the University of Limerick (UL), Technological University of the Shannon (TUS) and Mary Immaculate College (MIC).

A further 15,000 full and part-time students are undertaking post leaving certificates or further education courses. This shows the potential that the city has and must harness the power of its Limerick student population to create a vibrant and busy city from a retail, hospitality, and cultural standpoint.

The news comes as a four-week student marketing campaign by Limerick City and County Council concludes.

The Limerick Student City campaign by the Council’s Marketing and Communications Department encouraged university students, further education students, apprentices, and those undertaking skills-based learning to get out and about to experience Limerick city like never before.

The campaign, which used #LimerickStudentCity, employed captivating content including Instagram Reels, static imagery, and campaign-specific graphics to engage the target audience; it welcomed new students to Limerick and encouraged them to explore all that the city has to offer off-campus.

The social and on-campus campaign informed students that there is more to student life than their campus and Limerick city is the perfect place for them to maximise their student experience.

Staff from the Marketing and Communications team visited the campuses of UL, TUS Moylish, TUS LSAD and MIC in person and create engagement with Limerick.ie and on their social channels via an iPad giveaway.

The iPad competition was won by Meaghan Gilmartin, who is a third-year Early Childhood Education and Care student at TUS Moylish.

The overall campaign was supported by UL, TUS and MIC’s social media campaigns and helped to mark the Limerick Open Days on October 20 and 21.

Related Topics:Limerick Student City
Up Next