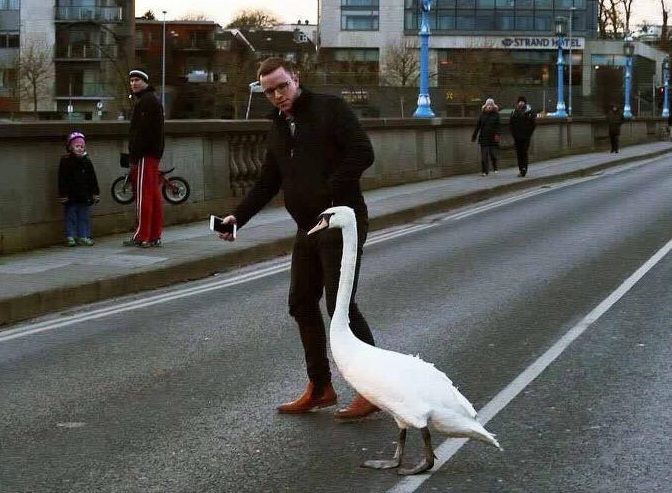 Jack McGrath guiding the swan down towards the slipway. Photo: Deirdre Power.

On Saturday afternoon Limerick Animal Welfare received a call regarding a swan loose on Sarsfield Bridge in Limerick city centre.

Unfortunately, Limerick Animal Welfare was nowhere near the bridge and the swan was in danger due to the traffic.  So the Limerick Swan Whisperer Jack McGrath swooped in and brought Limerick traffic to a standstill in order to help the poor swan in need cross the road.

Photographer Deirdre Power was in the right place at the right time and captured images of the scene on Sarsfield Bridge with Jack expertly guiding the sawn by whistling and pointing in the direction of the slipway at Wellesley Pier where the bird was led down to the water safely.

Deirdre Power posted the images to her own Facebook page, which were then shared by Limerick Animal Welfare’s Facebook page on Sunday, and have now received over 5,800 likes on their Facebook page as well as hundreds of shares and comments.

Back to safety at last! Photo: Deirdre Power

“Jack gave us a call yesterday to say a swan was on the bridge and what could be done to help. After getting some information on the condition of the swan we talked to Jack about the possibility of either lifting or guiding the swan to the slipway and back to the safety of the water. Jack realised we were 25 miles away and the swan was in danger for traffic so he guided the swan to safety and made sure traffic stopped to allow the bird to cross the street. It took time but as you can see from the photos taken by Deirdre Power, this gentleman successfully returned the swan back onto the river.” Limerick Animal Welfare explained.

Jack McGrath, who has now been dubbed the “Limerick Swan Whisperer”, performed an incredible act of kindness which is appreciated by both the people of Limerick and birds alike!

To read more stories about nature in Limerick click here