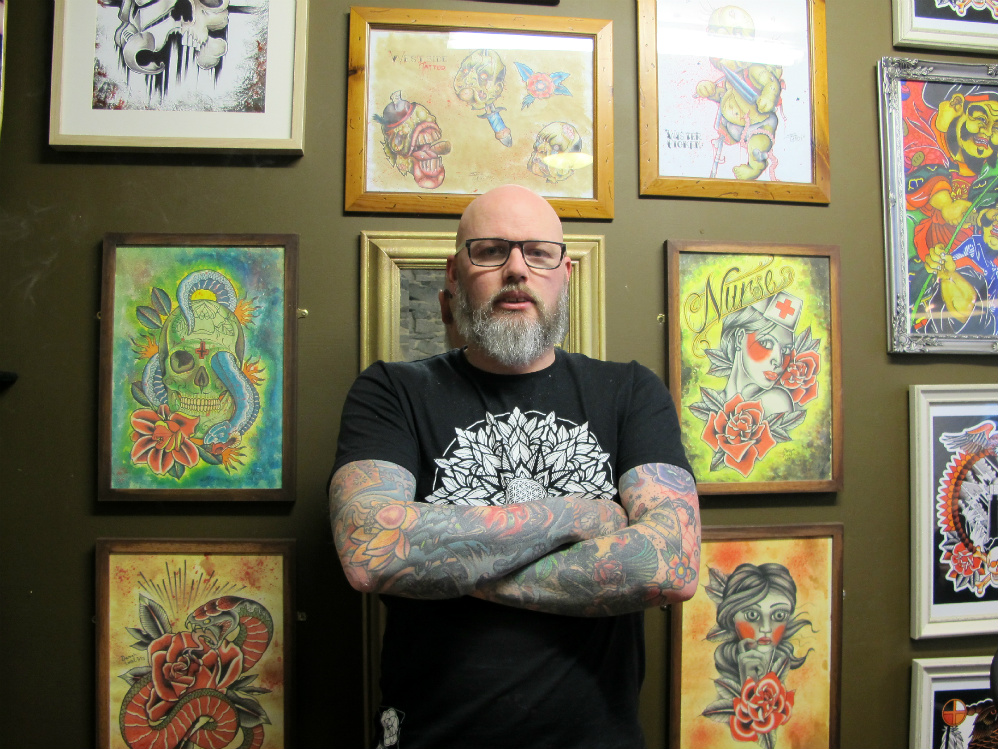 The Limerick Tattoo Convention running on Saturday, March 25 and Sunday, March 26 at the Great National South Court hotel is bringing a new lease of life to Limericks existing tattoo culture.

Roy said, “It will create an economic boost in Limerick anyway, Limerick have sold a lot of hotel rooms. The South Court hotel is completely booked out. Most of the hotels in the city are booking up because of it. There hasn’t been a tattoo convention in Limerick for the last 17 or 18 years. Limerick was the only big city in Ireland that didn’t have one. In regards tattoo industry, it’s going to put Limerick on the map. Limericks the least populated city with tattoo studios in Ireland. People think we have a lot with 7 or 8, but Dublin has 200, cork has about 30 and Galway has about 20 or 30 as well. By bringing a tattoo convention to Limerick, people will start recognising Limerick as a tattoo destination.”

Roy expressed his hopes for continuing The Limerick Tattoo Convention on an annual basis. With the tattoo industry becoming more and more prominent in modern society, bringing a tattoo convention to Limerick has every possibility of broadening Limericks horizons and bringing different cultures, different lifestyles and a whole new scene to Limerick.

Roy went on to speak about the existing tattoo scene in Limerick. He commented “The tattoo scene is big enough in Limerick. it’s obviously been getting bigger in the last 10 years with television shows like Miami Ink starting up. There is a Tattoo-scene in Limerick. in the last 3 or 4 years, it’s become more of a fashion element. We always try to educate the younger people when they come in, these tattoos are forever, you can’t just take it off when you get sick of it. The tattoo culture in Limerick is small in comparison to the other cities in Ireland. There is a growing tattoo scene here, though. You can see it with the generations coming in, they’re getting younger, 21 and 22.”

With a growing demand for the tattoo industry in Limerick, a tattoo convention may satisfy this demand. By bringing over 100 artists of the very best national and international tattoo artists right into the heart of Limerick, the Limerick Tattoo Convention aims to be one of the very best of its kind. The outstanding line-up of artists for this 2-day event is, for any tattoo lover, beyond comprehension. Roy commented on this line up stating “As regards the artists attending the convention, we have the highest calibre of tattoo artists ever at a tattoo convention under one roof in Ireland. Over the years people have had this great artist, or that great artist or maybe even 2 or 3 but nobody has had this amount at the same time and at a first-time convention!”

He went on to mention “We’ve spent 18 months planning it. Some of the artists coming to are booked out, you’ve to book 2 years in advance for them. Some of the Artists coming to us have attended the London Tattoo Convention which is like the holy grail for tattoo artists, getting an invitation to that is like getting nominated for an Oscar. Because of the calibre of artists that we have booked for the Limerick Tattoo Convention we’ve had so many people contacting us wanting to work at the convention. We’ve had to turn down around 50 artists wanting work with them at the convention.

With a full programme of events, this convention will cater not only to the tattoo lover but to those seeking a little entertainment too. Roy commented on how he hopes the convention will be a versatile one, with something for everyone. He said, “I’m a proud limerick person. I grew up here, and I think if I’m going to help bring a tattoo convention to Limerick and want people to make money from it, I want to bring the best tattoo convention to Limerick. We’ve been getting great feedback from people hoping to attend and all the artists we have booked. Everything has been so positive and we really have high hopes for the convention.”

He then added “We are conscious of having a full programme. I’ve attended a lot of tattoo conventions and some of them have no entertainment apart from a band on in the evening at 10 o’clock. We are conscious of the ordinary person coming in, someone who might have no tattoos and is just coming for a look, flicking through portfolios or collecting stickers. We want to have something for everyone. Anywhere there is a gap we have a DJ. We also have the host Bernadette Macias, she does this for a living and if she thinks there’s a lull, she’ll fill it.”

With tickets at €25 for the weekend and €17 for the day, the Limerick Tattoo Convention is one of a kind and can’t be missed. The public is also encouraged to pre-book tattoos with their favourite artists to avoid disappointment on the day, simply fill out the booking form available on their site.

Keep up to date with the convention here