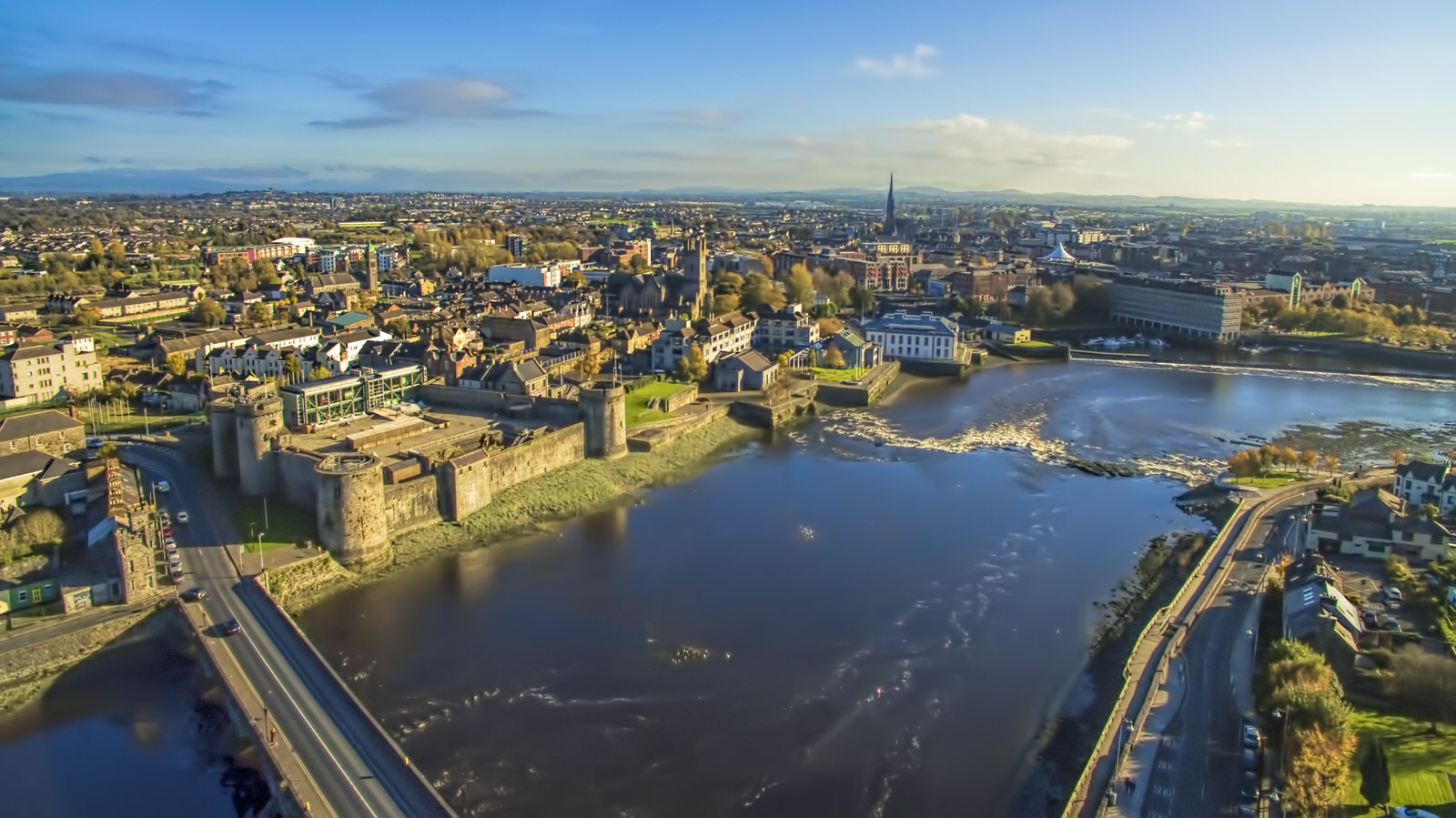 Limerick Three Bridges Walk – a 3.6km walk that follows a stunning route along the banks of the River Shannon and passing some of Limerick’s most iconic landmarks

The Three Bridges is a 3.6km walk that follows a stunning route along the banks of the River Shannon and passing some of Limerick’s most iconic landmarks.

The walk follows the banks of the River Shannon in the city centre and you will cross two of the three bridges, which span the river. The older bridges Thomond and Sarsfield bridges are pretty impressive sights. On clear days especially in Spring, Autumn or Winter you will have wonderful views of the Clare Hills. If you wish, you can make a quick visit to the Hunt Museum which this walk actually passes. The Limerick City Council have made great improvements to the walk on the north bank of the River Shannon, which now includes a short boardwalk close to the Treaty stone. The walk follows the banks of the River Shannon, passing St. Mary’s Cathedral and the historic King John’s Castle, before crossing Thomond Bridge, and passing the Treaty Stone on Clancy’s Strand.

Starting off our journey at the Treaty Stone, the renowned sculpture, the Treaty Stone holds a multitude of historical importance for Limerick City. The Treaty of Limerick, which gives the city its nickname ‘Treaty City’ was signed on the 3rd of October 1691 after the war between William III of England and his Father-in-Law King James II and was famously signed upon the infamous stone giving great significance to it. The Treaty Stone, located on Thomond Bridge, now plays its role as a major tourist hotspot in Limerick City and plays a pivotal role in the Three Bridges Walk in Limerick City.

Heading to our next spot, King John’s Castle located at the centre of Limerick’s Medieval square is a true treasure trove to Limerick City. Built in 1200, the castle holds over 800 years of history within its walls. The picturesque architecture of the building has a breathtaking view in store for commuters on the Three Bridges Walk.

The Poet statue that rests upon the Parade holds major literary importance for Limerick that can be seen along the Three Bridges Walk, the persona of the statue, Michael Hogan, better known as the ‘Bard of Thomond’, was a prominent figure of Limerick City during the 1800s. The Bard is known for his epic tales such as “The Drunken Thady and the Bishop’s Lady”. Is now a favourite folktale story in the households of Limerick City.

The Dolores O’Riordan Mural, located just across from the Poet Statue on Castle Street brings with it a great sense of nostalgia and pride. The colourful mural pays a beautiful tribute to the late Cranberries frontwoman and is a daily reminder for walkers of the Three Bridges Walk of her talent and the mark she left behind in Limerick and far beyond.

The City Hall Swan Fountain, located at the back of City Hall may seem like a normal picturesque fountain, however, upon close inspection, you may notice that this fountain actually serves as a memorial. The fountain pays tribute to the people of Ireland who fled their land begining with the ‘Flight of the Wild Geese’ in 1691. The plaques that are located around the fountain tell this epic story.  Next to the Swan Fountain is the Limerick Medieval Garden. Consisting of a beautiful spot for nature in the city and made up of gorgeous Romanesque architecture, this small garden is a real eye-catcher!

You really would not be taking part in the Three Bridges Walk if you do not pass by the statue of the infamous Limerick Legend that is Terry Wogan. The iconic statue which was unveiled at Harvey’s Quay in 2017 celebrates the life of the late television and radio broadcaster and gives people a daily reminder of his legacy.

Limerick-born artist Michael Duhan presents a permanent reminder through his Dockers Monument. The monument which rests on Bishops Quay amazingly depicts the hard work of dockworkers from Limerick’s past. The inspiration for the monument came from Duhan’s father who was a docker that worked on ships. The memorial now rests as the perfect reminder to Limerick locals of the hard work put down in the past by those who came before them.

What would a walk along the Shannon be without a glimpse of St Michael’s Rowing Club in action? The club which has been active since 1901 almost always has active members in practice out on the Shannon, which is a delightful sight for many. Limerick locals have become so accustomed to seeing members of St Michaels Club that they have almost become part of the natural landscape on the Three Bridges Walk.

Here are some excellent pubs and cafes en route for those in need of refreshment:

The Curragower Bar, located right in the heart of Limerick’s Medieval Quarter along Clancy Strand creates a charming timeless setting for its customers. Although it may have a classical interior, the Curragower certainly provides customers with an always up to date range of food and beverages.

Jack Mondays Coffee House is a true Limerick classic. With its iconic outer decoration of two life-size soldiers guarding the building. With its eye-popping exterior, this place is sure to attract a customer or two and trust us what comes from Jack Monday’s tastes just as good as it looks on the outside.

Bakehouse 22, previously known as Tracey’s Bakery, is a Limerick local favourite. The business which has been run by the Tracey Family for over 50 years provides customers with food and beverages which are made with passion. Located on Nicholas Street, Bakehouse 22 serves as the ideal spot for a coffee break, after all, everyone deserves to treat themselves after some exercise.

House Limerick, once well known as a place to get your boogie shoes on a Saturday in its Nightclub before the world turned upside down, serves amazing food and more importantly for walkers, amazing coffee! The building located at Howley’s Quay is the perfect pitstop for walkers with an impressive range of hot and cold drinks, smoothies and sweet treats. Open currently Wednesday to Sunday.

Abbey River Coffee is known for its, well the name is in the title, coffee. It is not just any coffee stop, however! With its gorgeous stone walls and being located just by the Shannon, along with a sensational cup of coffee, Abbey River Coffee serves as the perfect Instagram worthy spot for social media fanatics.

For more information on the Three Bridges Walk go HERE

Related Topics:featuredThree Bridges Walk
Up Next