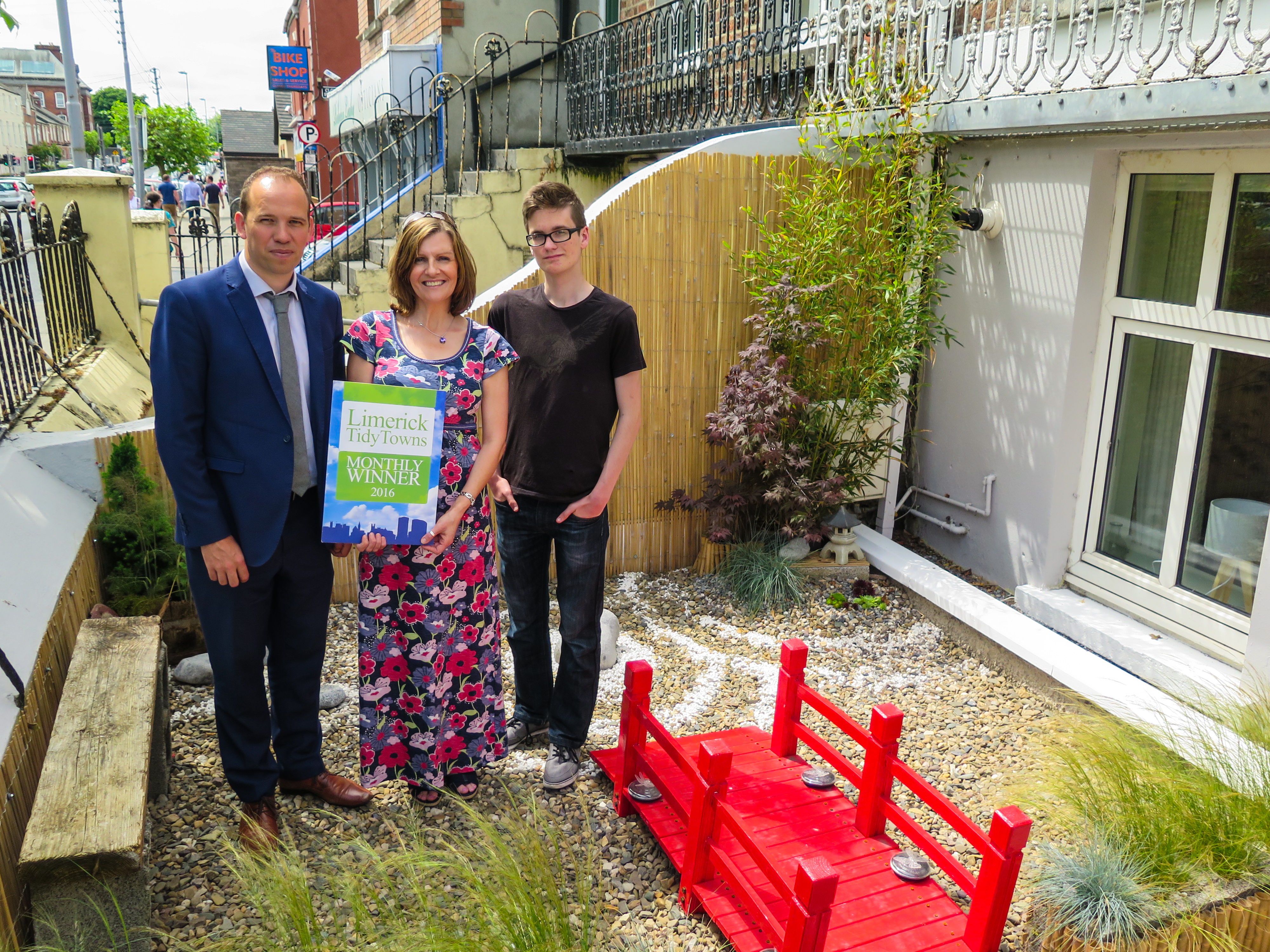 Maura says “Having already presented an award in February to Rebecca Leahy Opticians only two doors away, we normally wouldn’t present two awards to premises so close together, but we simply couldn’t overlook this beautiful little oriental garden which has been lovingly created by Kieran and his former tenants Sih Yu Chen-Found and her husband Paul Found.  While small in size, it makes the most of every inch of space and greatly enhances the streetscape of O’Connell Avenue. The garden is admired by anyone who walks by and indeed people have stopped to photograph it, so we simply couldn’t have chosen a more worthy winner of our June award”.

Limerick Tidy Towns award June 2016 winner, Kieran says “The garden at Tritonville was put together early in 2016.  My former tenant Sih-Yu is a great artist and designer and we were really lucky to have her as she was the creative mind behind everything. She also wrapped the tree on the street (which is kind of funky!) and painted the blue wave wall at the corner. She made the Chinese sign on the front wall which says “O’Donovan’s House” which is pretty cool!  The garden was obviously just a yard to start and it was really just a bit of fun to see what we could do with it. Sih Yu is from Taiwan and we wanted to make it as oriental as possible with nods to Asian culture and philosophy. We used second-hand materials where possible and once we got the stones, the bridge, the timber and the cavity blocks, it all came together quite quickly…I love the wavy grass on the way in and the tiny pagoda. We added the bench recently so it’s like a little oasis of calm.”

The Tritonville oriental garden is the sixth Limerick Tidy Towns monthly award winner for 2016, following Silverwood Jewellers in January, Rebecca Leahy Opticians in February, M&C Property in March, Ryans Jewellers in April and The Cauldron Bar in May.

All monthly winners for 2016 will be in with the chance of winning this year’s overall prize.

If you wish to volunteer with Limerick Tidy Towns they meet every Sunday morning at 11 am at the corner of Thomas Street and O’Connell Street, and our Wednesday evenings at 6 pm outside the White House for the duration of the summer.