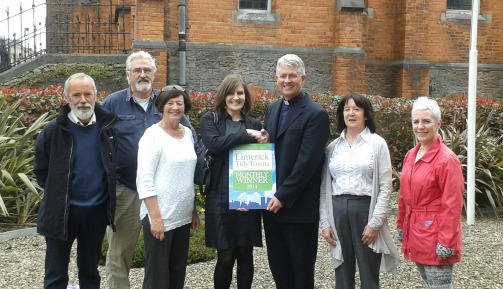 Pictured: Father Tom Mangan being presented with the Award by Maura O’Neill of Limerick Tidy Towns outside St Joseph’s, along with members of the South Limerick Residents Association.

Congratulations to St Joseph’s Church, O’Connell Avenue, on winning the Limerick Tidy Towns Monthly Award for May, for their beautiful grounds. The picture shows Father Tom Mangan being presented with the Award by Maura O’Neill of Limerick Tidy Towns outside St Josephs, along with members of the South Limerick Residents Association who do sterling work in the upkeep of the grounds and surrounding area.

Maura from Tidy Towns says “The Tidy Towns team were keen to choose an urban garden for May which would be in its prime at this time of year, and it was difficult to look past St Joseph’s following the extensive redevelopment of its grounds with new paving, railings and floodlighting which looks wonderful. The shrubs, trees and plants are also beautifully maintained and create a most attractive background for any events that take place in the church, particularly given its location on a busy city street. Of course, the church itself is also very beautiful and a landmark building with a rich history in the city, and definitely well worth a visit.” For more information on St Joseph’s you can visit their website www.stjosephsparish.ie

St Joseph’s is the fifth monthly winner of the Limerick Tidy Towns award, with winners so far for 2014 being Lucky Lane for January, Chicken Hut for February, Frances Twomey & Co Solicitors for March and the The Copper Room for April. An overall winner will be chosen from the 12 monthly winners at the end of the year. To be in with a chance to win, businesses or private individuals simply need make a special effort to improve the city’s appearance by starting with their own. Even the smallest effort like cleaning a basement may be recognised and merit the award. This is your chance to not only help the Tidy Towns effort but also to improve your city.

If you wish to volunteer with Limerick Tidy Towns they meet every Sunday morning at 11 am at the corner of Thomas Street and O’Connell Street, and at 6 pm outside the White House. For further details you can like them on Facebook, follow them on Twitter or check their website www.limericktidytown.com. If you wish to contact Limerick Tidy Towns, you can so via Twitter or Facebook or email [email protected]