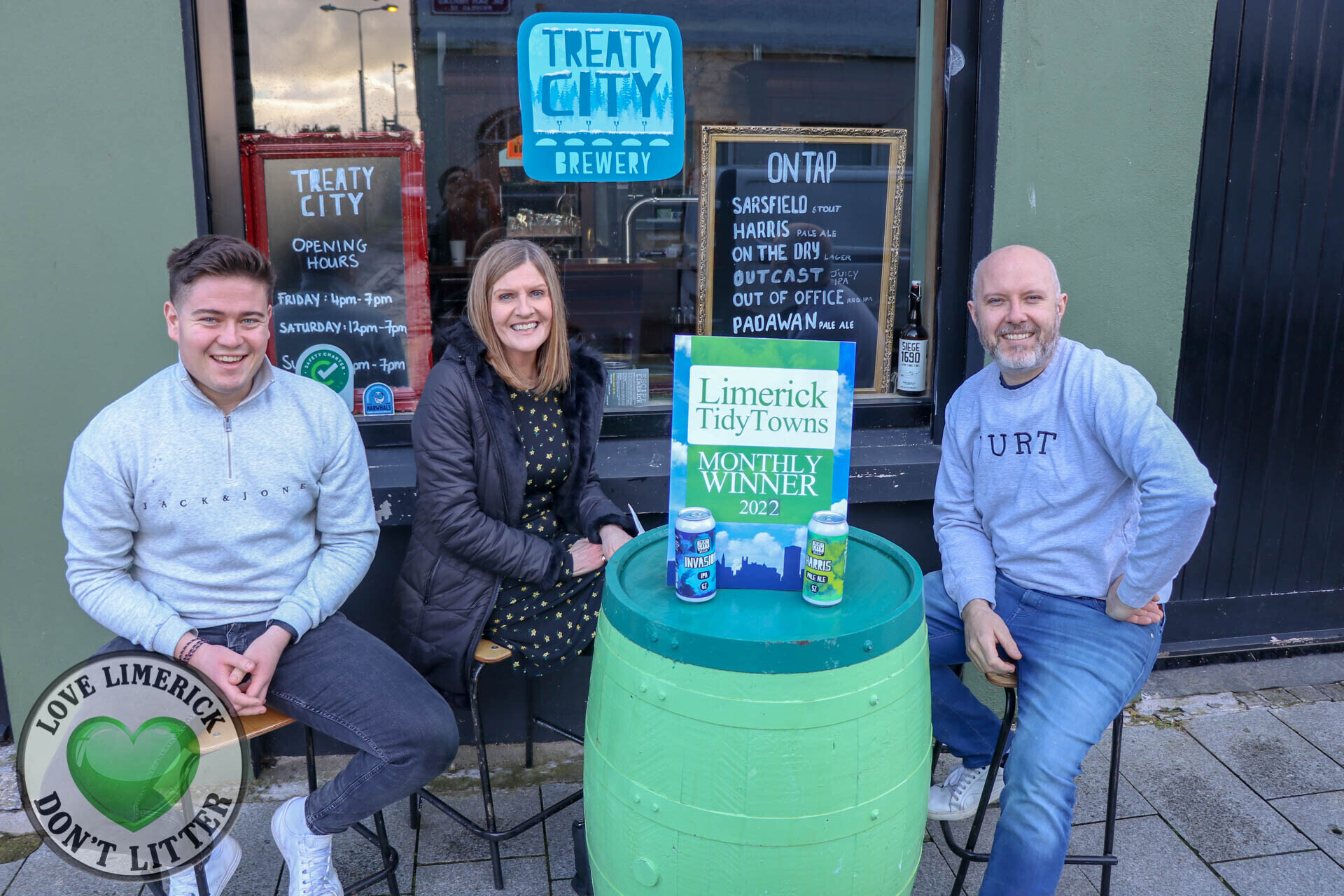 Maura O’Neill of Limerick City Tidy Towns says, “Way back in March 2020, we had already arranged to present Treaty City Brewery with our next monthly award, but when lock-down happened, we suspended the awards until things got back to normal, not realising how long that would take. At the time, we agreed that we would of course return to Treaty City Brewery for the first monthly award post-lockdown, expecting it to be only a matter of months, but here we are almost two years later presenting the award for February 2022 instead.

“We are so delighted that Treaty City Brewery not only survived but thrived throughout the pandemic, by offering a take-away and delivery service, as well as safe and hugely enjoyable outdoor events which became the place to be during both the warm evenings of summer and pre-Christmas 2021. We therefore could not be happier to be back presenting this award today.”

Limerick City Tidy Towns are fully involved in and supportive of the major regeneration that has been undertaken on Nicholas Street over the past few years, both pre and during the pandemic, involving the repainting and restoration of many buildings on this highly important link between St Mary’s Cathedral and King John’s Castle in the heart of the city’s medieval district. They were also involved with the new string lighting that went up prior to Christmas 2021 and has remained in place since.

We are delighted to have re-launched our Monthly Awards and our first award in two years has gone to @TreatyCityBrew on Nicholas Street. Visit our Facebook page for full Press Release and more details. @ilovelimerick @LimerickEnviron @MedievalLimk pic.twitter.com/1HG54vKVtz

A huge part of the rejuvenation of Nicholas Street was the opening of Treaty City Brewery in May 2019, a small artisan microbrewery, which was built over the course of a 6-month period, using locally sourced labour and materials wherever possible. The result is a beautiful building, which perfectly blends contemporary branding and paintwork with the traditional Nicholas Street terraces, and the unveiling of the mural of the legendary Constance Smith in September 2019 added even more to an already striking building.

As well as making the highest quality of natural ales using locally sourced ingredients with no additives or preservatives for both the local and national markets, Treaty City Brewery also offer Brewery Tours which are a unique and authentic experience that pays homage to the art of craft brewing.

Treaty City Brewery’s Limerick City Tidy Towns February 2022 award is the first post-Covid, and as a result will be in with the chance of winning this year’s overall prize at their annual event to be held early in 2023. The two previous winners from January and February 2020 will also be included in the overall event, as none was held in either 2020 or 2021 due to the pandemic.