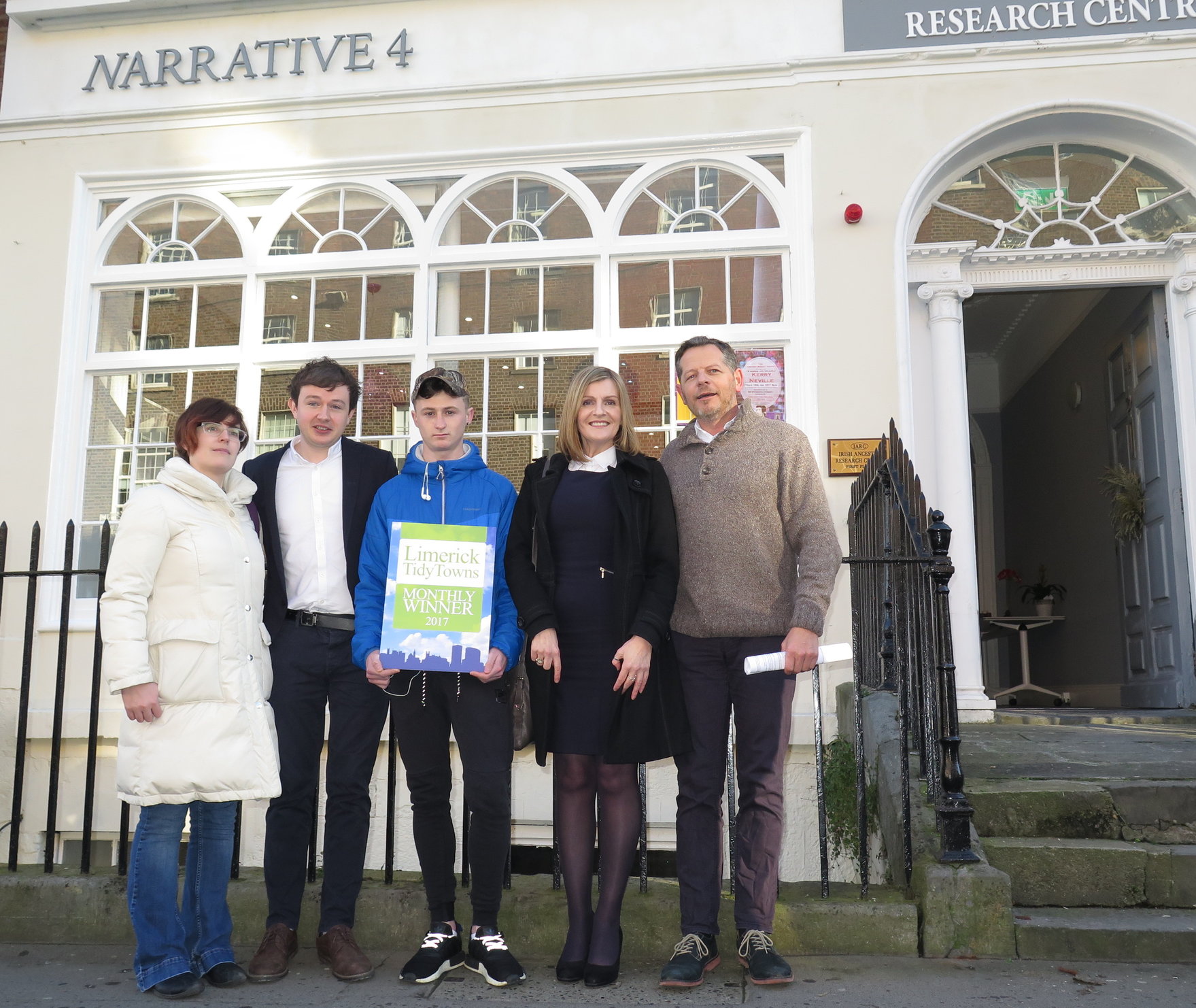 Accepting the award, Ivan commented “I am delighted to accept this award on behalf of Narrative 4.  As a proud Limerickman, I am particularly pleased to see one of our historic buildings and this part of O’Connell Street come alive again with a new purpose.  I saw the joy of my fellow N4 students from all over the world when they visited and saw our centre for the first time last June at our Global Summit. It is great to know that the Limerick Tidy Towns also appreciate what we have done to make this old abandoned library the special place it has become.”

Maura says “Since Narrative 4 moved into what was the former library on O’Connell Street in September 2016, they have utterly transformed the building, which had previously been falling into some disrepair and was quite an eyesore in a prominent location on the city’s main thoroughfare. The Tidy Towns team have been hugely impressed with the work that has been done and the care that has been taken to maintain the original Georgian facade, whilst creating a bright new modern frontage, with immaculate paintwork and attractive signage, which complements the other buildings in the street.”

Narrative 4 was co-founded by Irish novelist Colum McCann and dozens of other artists from around the world in 2013 and is a not-for- profit global arts-education organisation that was created to foster empathy through storytelling.  At the very heart of it, its mission is to develop the first generation of truly empathic leaders and citizens and help them become agents of change within their own communities.  In 2016, Narrative 4 opened their first centre outside of the United States in Limerick. The Narrative 4 Centre was designed by Limerick-based architectural firm Feeney McMahon to be the administrative base for its European operations, as well as a creative space for young people from all over Ireland and the world.  The Limerick centre hosts workshops in storytelling, art and creative writing using a cutting-edge curriculum designed by some of the biggest literary talents in the world, and uses state of- the-art technology to globally connect young people. Narrative 4 Ireland is supported by Limerick City and County Council and the JP McManus Benevolent Fund.

As Limerick Tidy Towns Monthly Award January 2017, Narrative 4 is their first winner for 2017 and will be in with the chance of winning this year’s overall prize at their annual event to be held early in 2018. The overall winner for 2016 has already been selected by an online poll, and all winners will shortly be invited to Limerick Tidy Towns 2017 event where the winner will be announced and the prize awarded.

Limerick Tidy Towns would like to thank Richard Lynch from I Love Limerick for taking the photographs for this and all of their monthly awards. If you wish to volunteer with Limerick Tidy Towns they meet every Sunday morning at 11 am at the corner of Thomas Street and O’Connell Street, and on Wednesday evenings at 6 pm outside the White House during summer months. For further details, you can like them on Facebook, follow them on Twitter, check their website www.limericktidytown.com or email [email protected]

BICS National Forum 2017 held at the University of Limerick