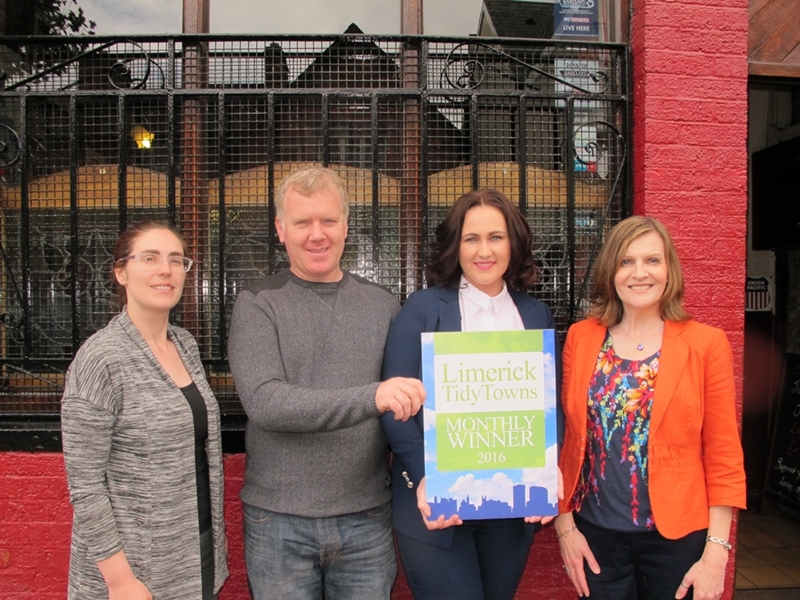 Limerick Tidy Towns have presented their monthly award for May 2016 to the Cauldron Bar, for its consistently lovely pub frontage at 33 Nicholas Street. Pictured outside the premises being presented with the award by Maura O’Neill and Sharon Slater of Limerick Tidy Towns are owners Linda McMahon and Keith McMahon.

Maura says “Following a nomination from a member of the public, the Tidy Towns team were in total agreement that The Cauldron Bar on Nicholas Street was fully deserving of our monthly award for May, with its distinctive traditional signage, vibrant paintwork and attractive hanging baskets making it a most welcoming place for Limerick locals and tourists alike.  This is most important given its location in the medieval quarter in such close proximity to St John’s Castle and we are delighted to recognise a property in that part of the city.  Even the reaction alone of the owners to being informed of the award showed just what effort they make and pride they take in maintaining the appearance of the bar.”

The Cauldron Bar first opened in 1911 and over the years has developed a reputation for having that friendly “everybody knows your name” atmosphere which makes a visit to this family pub an authentically Irish experience, full of stories and great characters.  The staff are renowned for their friendliness to both locals and tourists alike, and go out of their way to help visitors with whatever they require, from simply a quiet drink to a private function in their upstairs function room.  There are big screens which show live sport, and it is often then that the atmosphere really excels.  For more information, give them a call on 418586, or simply call in for a drink.

The Cauldron Bar is the fifth Limerick Tidy Towns monthly award winner for 2016, following Silverwood Jewellers in January, Rebecca Leahy Opticians in February, M&C Property in March and Ryans Jewellers in April.  All monthly winners for 2016 will be in with the chance of winning next year’s overall prize.

Limerick Tidy Towns would like to thank Sarah O’Connell of I Love Limerick for taking the photographs for this and all of their monthly awards.

If you wish to volunteer with Limerick Tidy Towns they meet every Sunday morning at 11 am at the corner of Thomas Street and O’Connell Street, and our Wednesday evenings at 6 pm outside the White House have now recommenced.For further details you can like them on Facebook, follow them on Twitter, check their website www.limericktidytown.com or email [email protected]

For more related stories by I Love Limerick, click here

Limerick Slang is a hit across the city and county