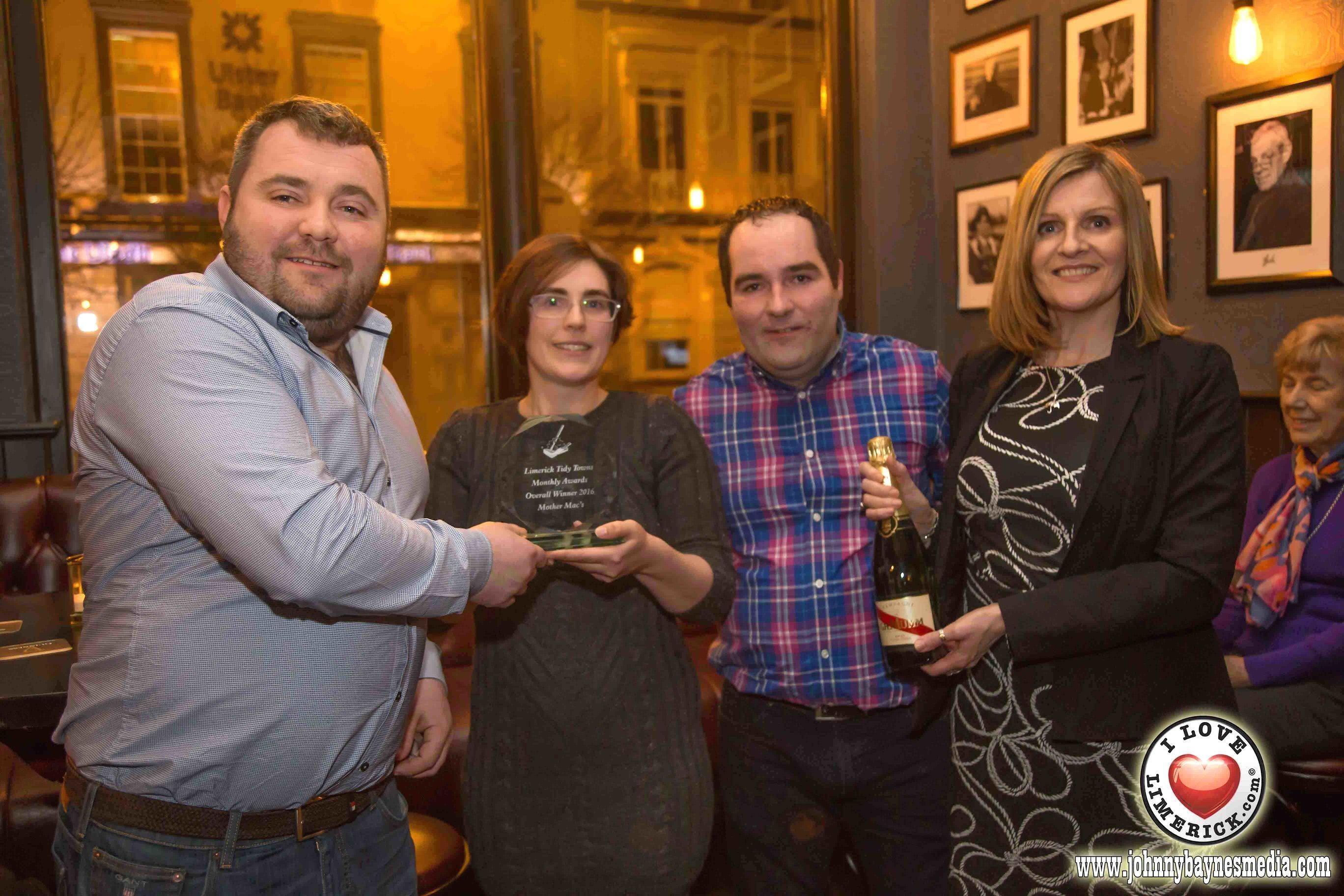 Congratulations to Mother Mac’s Pub on High Street, who were presented with the Limerick Tidy Towns overall Winner 2016 prize at their annual event at The White House on Monday 6th February, following an online vote by members of the public.  Runner up was Bean a Ti on Little Catherine Street and a surprise 3rd place was the private residential garden at Tritonville, O’Connell Avenue.

The winner’s trophy and a bottle of champagne were presented by Sharon Slater and Maura O’Neill of Limerick Tidy Towns Overall Winner 2016 to James and Michael McMahon of Mother Macs who expressed their delight at the win and thanked all those who helped them achieve it.

There was a good turnout of representatives from the 11 2016 monthly award winners, along with 2014 and 2015 overall winners and Limerick Tidy Towns volunteers and committee members. Sharon Slater spoke at the event and thanked everyone for coming.  She explained that Limerick Tidy Towns continually strive to get more volunteers as well as extra support from the Local Authority, and hoped to encourage more people to join them either on their regular clean ups, or indeed just to commit to keeping their own properties looking well, which is what was being recognised in the monthly awards.

She stressed that it was particularly important this year as Limerick city centre has been nominated for a separate “Ireland’s Best Kept Towns” award in the Large Urban Centre category, following the rise in their points mark in last year’s application from 2015.  The judging for this will take place in May, two months earlier than the normal competition judging which takes place in July.  Sharon mentioned that the Tidy Towns volunteers have seen a big improvement in Limerick city as a whole since they first started presenting these awards back in 2014, and felt that 2016 had been a particularly good year with the city centre being regenerated at a pace, with new units opening and existing ones being given new leases of life.

One such example was the fabulous but sympathetic refurbishment of the March winner, The Red Church on Henry Street, by M&C Property, transforming it from a neglected empty building to a gorgeous space, both inside and out.

Another hugely impressive refurbishment of a long-standing Limerick business is the September winner and overall runner-up Bean a Ti since its re-launch in 2016.   The Canty family were praised for the work that went into it and its overall positive effect on Little Catherine Street.

Limerick’s pubs are always well represented in the list of monthly winners, mainly due to the importance of the positive impression of Limerick they give to both locals and visitors to the city who frequent them.

This is especially true of the two 2016 pub monthly winners, being The Cauldron Bar in May, and Mother Macs in November, who also took the prize for overall winner.

As with previous years, Limerick’s famous Georgian heritage was marked by the October winner, O’Gormans Solicitors took the award in October for its perfectly maintained double-fronted building at the corner of O’Connell Street and Hartstonge Street.

For the first time ever, monthly awards last year went to a private individual rather than a business, for the enchanting little oriental garden at Tritonville on O’Connell Avenue who won in June, which came third in the overall event.  It is hoped that more residential properties will feature in 2017.

Another nearby winner was Rebecca Leahy Opticians who won back in February due to the great use it has made of what used to be an empty dilapidated unit on O’Connell Avenue, one of the main routes into the city centre.

At this point, the South Limerick Residents Association were also praised for the work they do, which definitely contributes to the high number of monthly winners in their patch.

This year’s basement winner was Salon 35 on Cecil Street which won in July and is a great example of what can be achieved with basement properties in Limerick.  As anyone who knows anything about Tidy Towns, basements are their biggest challenge and while much has been done to deal with the problem since the group formed, unfortunately, there are still too many inaccessible.

Professional Nails who won in August similarly has taken what was a very neglected little lock-up shop unit and beautifully renovated its façade with striking paintwork and hand painted signage.

For the first time, monthly awards went to not just one but two jewellers, being Ryans Jewellers who won in April and Silverwood Jewellers on Cruises Street who won in January.  Sadly the owner of Silverwood Jewellers, Paula who appeared in the photo getting the award, has since passed away, and a special tribute was paid to her and her staff for maintaining the shop’s beautiful appearance.

Staff and management at The White House were thanked for kindly hosting the event as well as Richard Lynch and the team from I Love Limerick for their continuing support and Southern Advertising for doing the monthly vinyl free of charge.

Representatives from the two previous overall winners, C O’Neills in 2014 and Bobby Byrnes in 2015 were also acknowledged, and the evening drew to a close when nominations for 2017 awards were invited from members of the public.

To read past stories about Limerick Tidy Towns click here