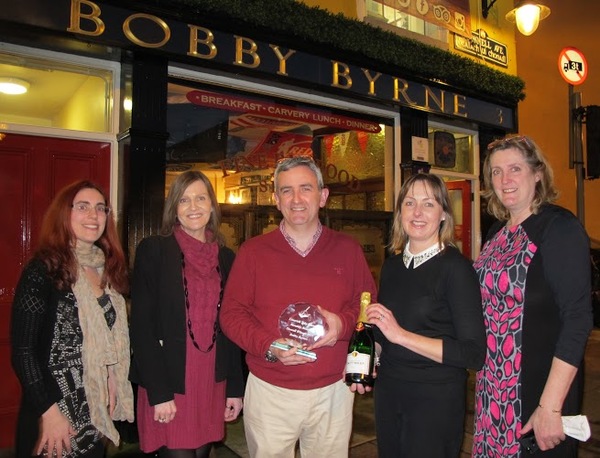 There was a great turnout in Bobby Byrne’s on Tuesday night, for the announcement of the overall Limerick Tidy Towns Winner 2015, which was voted for by members of the public. Bobby Byrnes themselves won the award back in March 2015 and very kindly offered to sponsor and host the event this year, so the announcement of themselves as overall winner was warmly greeted by all the staff.

Maura O’Neill of Limerick Tidy Towns in thanking Bobby Byrnes for hosting the awards said, “We are very grateful to Fiona and Robert for kindly hosting and sponsoring this evening’s event. What we’re saving here will go a long way to funding more litter pickers – all we need now is more volunteers to use them! But we remain hopeful that TLC and indeed events like this will encourage more people to come and join us on our clean ups, or indeed just to keep their own properties nice and tidy, which put simply, is what these monthly awards are all about”. Sharon Slater and Maura O’Neill from Limerick Tidy Towns were happy to note a big improvement in Limerick city as a whole since they first started presenting the monthly awards two years ago, and from a point where they initially struggled to find worthy recipients, they now find themselves with plenty of choice.

Having said that, only two of last year’s winners could be considered new units, one being the CompuB shop on O’Connell, which won the award in May primarily for NOT being what was there before it! Everyone was reminded of that dreadful old Kiely’s Electrical sign that hung for so many years above an eyesore of an empty building in such a prominent location in the heart of the city centre, so to have it replaced by such a clean modern unit as CombuB, selling state of the art products, really was an illustration of how Limerick hopefully can be seen to be progressing in the same way. The same could be said for the April winner, Parnell Plaza on ParnellStreet, the second of the two new units.  The Railway station is currently getting a much needed overhaul, but in the meantime, the opening of units such as Parnell Plaza is highly welcome and give this very public location a much needed boost when it comes to first impressions of the city as a whole.

By contrast to these new businesses, the October award went to one of Limerick’s most traditional and long-standing Limerick businesses, O’Donnell Boutique, on Catherine Street. Traditional only in the sense of the property and signage obviously, definitely not the fashion they sell which is right on trend. Theirs is such a substantial frontage on Catherine Street that it’s hugely important that it is beautifully maintained and that’s exactly what O’Donnells do consistently.

Limerick Tidy Towns are also extremely cognisant of Limerick’s famous Georgian heritage, which is why Keating Connolly Sellors Solicitors won the award in September. There are plenty of worthy Georgian buildings still in Limerick, and sadly also far too many which have been left to fall into disrepair, but KCS were often noticed and commented on by the Tidy Towns team given that they meet on Wednesdays at the corner of Glentworth Street so know just how consistently well the building always looks. November award went to The Samaritans for their beautifully maintained late Victorian building on Barrington Street. As was commented by the Tidy Towns team at the time they presented the award, the building actually stands out when you walk past Barrington Street with its pristine paintwork and railings and seeing a building such as this so beautifully preserved is wonderful.

Each year, Limerick Tidy Towns also try to award a group of people rather than a specific property, and this year they chose Limerick Youth Service for their wonderfully enthusiastic work in re-invigorating some of Limerick’s previously neglected alleyways. Speaking of alleys being enhanced lead nicely on to another winner, being The Stormy Teacup at Foxes Bow who won in January. The unit unfortunately closed during the course of the year but happily and has re-opened under new management, to whom Tidy Towns wished all the very best. It’s a fabulous little Limerick hideaway and its ethos of selling recycled goods as well as how it looks in the overall context of the very quirky and attractive Foxes Bow made it an obvious winner.

There are unfortunately still some eyesores, mainly attached to derelict buildings, but they continue to do our utmost to ensure all are cleaned in time. Happily the February winner, Thomas Street Framing Centre is in direct contrast to these and a genuinely lovely example of what can be done with these basements when restored and used to their full potential. Donie and Denis have also helped out the Tidy Towns team in the past without charging, in particular for their Georgian Doors project for the City of Culture in 2014.  In order to vary both the location and nature of the businesses of our winners, Limerick Tidy Towns this year picked a barber shop for the first time, being Figaros on Bedford Row. Its dark paintwork could be considered quite bold but it really does work and it stands out as a bright modern business, which is so important on a pedestrianised street with so much passing footfall. Last but by no means least, given where the event was taking place, some of Limerick’s most important venues aesthetically are our pubs, being some of our most attractive buildings, particularly for visitors to the city. Both winners this year, being The Curragower at Clancy’s Strand who won in August and the Limerick Tidy Towns Winner 2015 itself, Bobby Byrnes, who won in March are examples of some of our finest pubs. This is so important to Limerick as a whole as so many tourists and people from outside the city visit pubs more probably than any other business in the city, so to have them looking so well is a great reflection of the city as a whole and Limerick Tidy Towns paid tribute to all the management and staff for taking such pride in their appearance.

Limerick Tidy Towns also mentioned their first monthly winners for 2016 being the lovely Silverwood Jewellers on Cruises Street and Rebecca Leahy Opticians on O’Connell Avenue, who obviously weren’t eligible to win tonight, and welcome nominations from members of the public for future monthly winners in 2016. A special mention also went to Miriam O’Neill and all the staff at C O’Neills who were their overall winner for 2014. Their constant enthusiasm for both their shop’s appearance and the Tidy Towns awards in general is much appreciated and Limerick Tidy Towns hold them as a great example of why they choose the winners they do. Limerick Tidy Towns thanked everyone for their generous support in promoting their work, including Southern Advertising, The Limerick Leader and most especially Richard Lynch from I Love Limerick who kindly take the photos of the presentations each month, without charge. Congrats to the Limerick Tidy Towns Winner 2015 – Bobby Byrnes!