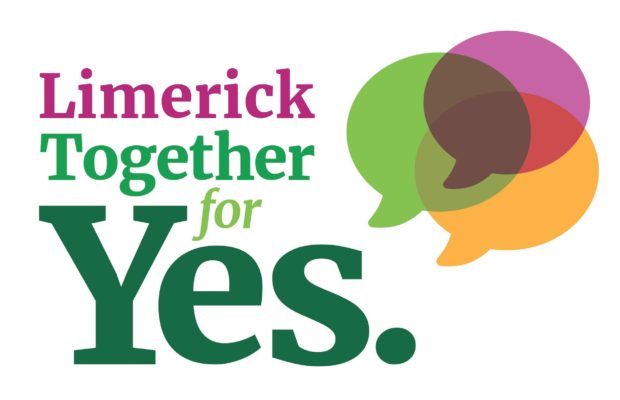 Limerick Together for Yes banner, courtesy of RepealLK.

Limerick Together for Yes is delighted to announce its official launch as the Limerick branch of the national Together for Yes campaign, which will take place on Monday, April 16th at 7 pm in The Strand Hotel.

Together for Yes is the National Civil Society Campaign to remove the Eighth Amendment from the Constitution.  The format of the Limerick launch will include a facilitated discussion which will look at the recent process by which Government arrived at the decision to have a referendum on the 8th Amendment.  Starting with the Citizens Assembly where Assembly member, Beckha Doyle, will discuss her experience and perspectives.  Next, it will move to the work of the 8th Committee where Deputy Jan O’Sullivan and Senator Paul Gavan will consider their time as committee members.  Finally, the role of the Together for Yes will be explored from both a local and national perspective with Co-Director of the national campaign, Ailbhe Smyth and Deputy Chairperson of Limerick Together for Yes, Jennifer Schweppe.  The particularities of the approach taken in Limerick will be highlighted, where all participating political parties have agreed to set aside political differences for the duration of the campaign and work under the Together for Yes banner.

Sinn Féin Senator, Paul Gavan, commented, “The evidence that I heard at the Oireachtas Committee was compelling.  We can no longer accept a situation where a pregnant woman has to be dying before she can access the medical intervention she needs.  We can no longer turn a blind eye to thousands of women buying abortion pills over the internet and taking them in Ireland without access to medical supervision and care.  And we need to end the hypocrisy that says ‘You can have a termination once you don’t have it here’.  Too many women have suffered that lonely journey to England for too long.  For all of these reasons the 8th Amendment has to be repealed.”

Labour TD, Jan O’Sullivan added, “Back in 1983 I knew the Constitution was not the right place for an issue as complex and personal as abortion and I campaigned against it then and since then.  We need to care for women in their own country, in their own health service, and with compassion when they face difficult choices in their lives.  I urge people to think about the consequences of having Article 40.3.3. remain in the Constitution which would be no change, no matter what the circumstances and to vote Yes for Repeal.”

Citizens Assembly member, Beckha Doyle followed, “One thing that I would say is abundantly clear based both on my own experience as a member of the Citizens assembly and with reflection on the assembly’s recommendations around the 8th Amendment, is that with knowledge comes perspective, education is key. Many people that took part in the process came in either opposed to change or on the fence & I think that the recommendations speak for themselves. When we take the time to educate ourselves on the topic and listen to the varied, and at times harrowing, testimonies of those who have been directly affected by this Amendment along with their doctors, psychologists, legal experts etc. a Yes vote for change is the only reasonable conclusion that one could come to.  We as a nation simply cannot keep doing this to the women and families of Ireland.  Research the topic, check your sources and their sources.  Look for the facts.”

Before the launch, 6 pm a Silent Art Auction in aid of Limerick Together for Yes will also take place, for which local artists, some of them well-known, have donated pieces. The art will be on display before the launch begins from 6 pm– 7 pm, with the results being announced later that evening.

Limerick Together for Yes official launch