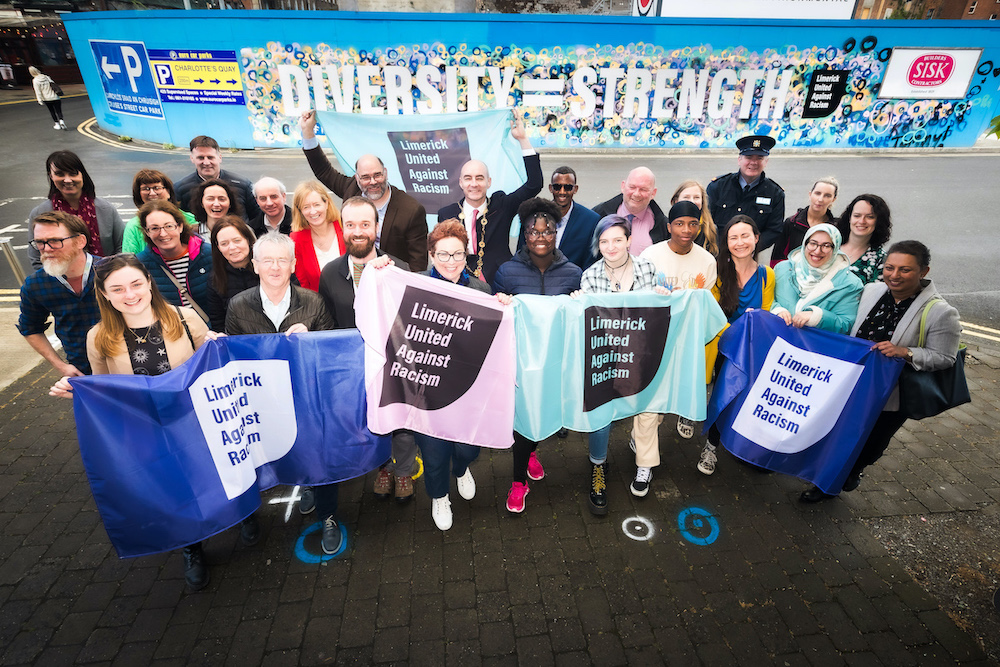 Limerick United Against Racism invites everyone to help #RootOutRacismLK

A new anti-racism campaign – Limerick United Against Racism is inviting everyone in Limerick to help #RootOutRacismLK by talking about racism with your family, friends, colleagues or teammates on World Diversity Day, Saturday, May 21.

The campaign initiated by the Limerick Integration Working Group launched at the new Diversity = Strength community mural on Michael St which was developed during Riverfest as part of the Limerick United Against Racism campaign.

In 2020 the Irish Network Against Racism (INAR) reported 700 incidents of racism had been recorded nationally on iReport.ie.  Local and national research has repeatedly highlighted significant concerns about the underreporting of racism in Ireland. This campaign emphasises the need to have conversations about racism.

The Limerick United Against Racism campaign is calling on all residents, local and migrant, to learn and to talk about racism.

Launching the campaign Mayor of the City and County of Limerick Cllr Daniel Butler said: “Racism in all forms is unacceptable in Limerick. The Limerick United Against Racism campaign sends a strong and clear message of solidarity with people who have experienced racism in the region. I support this campaign as Mayor, which seeks to foster a sense of unity, strength and belonging between all residents of Limerick irrespective of colour, creed or culture.”

Eugene Quinn, Chairperson, Limerick Integration Working Group said: “Each of us have a role to play in ensuring racism is not tolerated in Limerick. We are inviting all Limerick residents to learn about racism and its devastating impact on victims. The Root Out Racism campaign resources help explore our biases, both conscious and unconscious. On 21 May 2022 there is a call to action, to join us in having a conversation about racism with your friends, families, colleagues or teammates on World Diversity Day.”

A new online resource provides accessible information about the different types of racism, the impact of racism on victims and guidelines on how to have a conversation about racism.

The Limerick United Against Racism is an initiative of the Limerick Integration Working Group (IWG), which comprises 19 statutory agencies, community and voluntary organisations and migrant representative and support groups. This public anti-racism campaign delivers on one of the priority actions in the local migrant integration strategy, Belonging to Limerick 2018-22: Limerick City and County Integration Plan.

For more information and to get involved, follow Limerick United Against Racism on social media go HERE

Belonging to Limerick 2018-22: Limerick City and County Integration Plan can be accessed HERE

Related Topics:DorasLimerick United Against Racism
Up Next