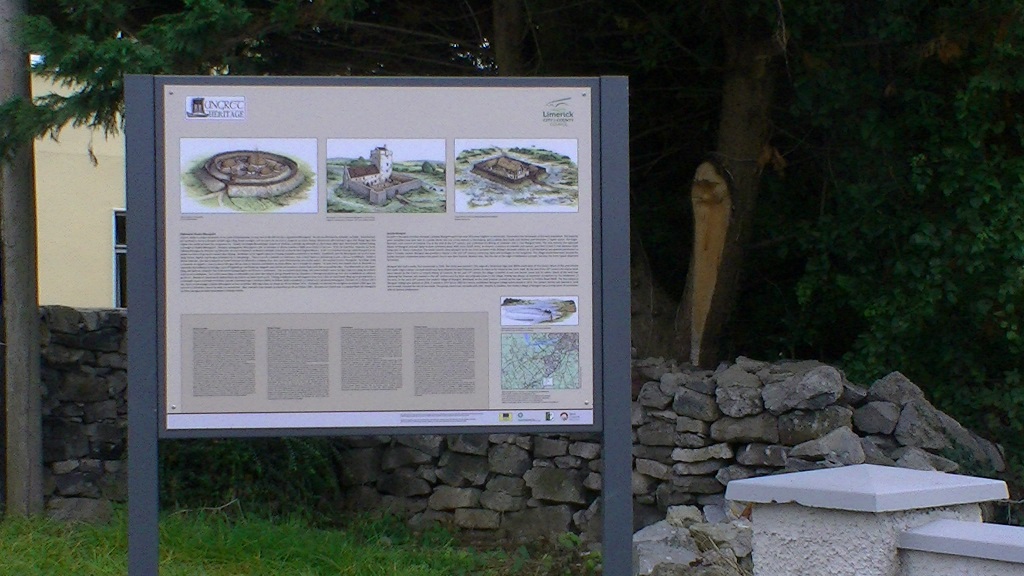 A new suite of interpretive signage putting the Limerick village of Mungret firmly on the tourist trail was launched last week on Thursday April 9.

Mungret Heritage Society and Limerick City and County Council completed the project to install the decorative signage supported by West Limerick Resources through a LEADER grant.

A total of nine signs have been installed including two large signs, one in the car-park of the old graveyard explaining various aspects of the monastery in the 11th century and the other in the village dealing with the ‘secular’ monuments in the wider area in the later medieval period. Both of these signs have been translated into French, German, Polish and Spanish.

Mungret has a venerable history and is lucky to have many buildings and structures still standing, according to Sarah McCutcheon, Executive Archaelogist, Limerick City and County Council.

“In addition, due to the developments in the area in the past decade, more information has come to light though archaeological investigation,” she said. “The original monastery at Mungret, in its time, was probably as large and important as Clonmacnoise yet this could not be recognised by visitors or tourists because of the lack of signage. With all the new housing developments it was felt that many new local inhabitants would also be unaware of the former significance of the area.”

The seven other signs that have been erected deal with St. Patrick’s Well or Tobar Phadraig, recent archaeological discoveries which range in date from prehistoric to medieval times. The early monastery which was founded in the 6th century, the small church probably dating to the late 11th/early 12th century, the large church, known locally as the ‘Abbey Church’, the Church of Ireland church built in the 19th century and finally the results of a graveyard survey carried out by members of the Society, which will enable visitors and family history researchers to locate graves throughout the graveyard.

Paul Broderick, PRO, Mungret Heritage Society, said it’s hoped that Mungret’s profile will be enhanced as a result of the initiative.

“From an historic point of view, Mungret is on a par with King John’s Castle and St Mary’s Cathedral in Limerick city and we want to ensure that the Mungret monastic complex is on the tourism trail,” he pointed out. “The N69 scenic route is one that’s heavily promoted and we’re hoping that Mungret will now get an increase in visitor numbers particularly if we’re linked with this route. The signs have been very well-received and definitely add to the fabric of the area so we’re looking forward to the tourist season ahead.”

You can check out the Mungret Heritage Facebook page here.