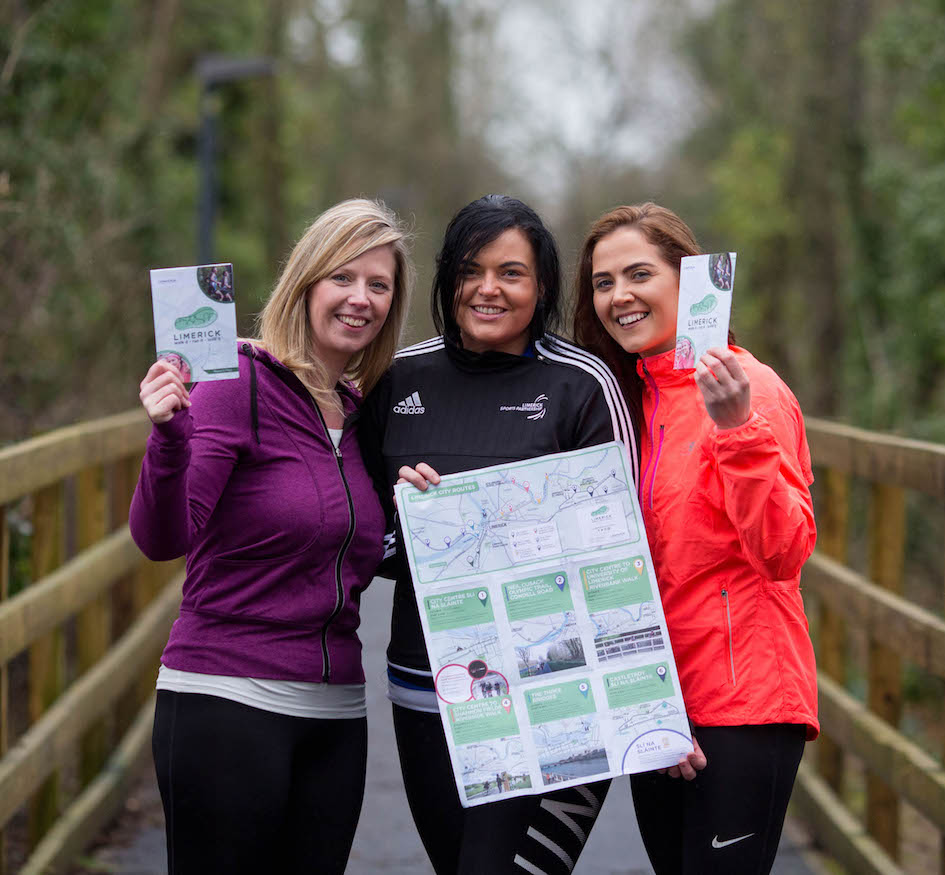 A new Limerick Walking Running Guide has been launched by Limerick City and County Council’s Marketing and Communications Department to highlight a selection of the numerous walking and running routes across Limerick.
As more and more people are beginning to take up some exercise and getting fit for the New Year, the new Limerick Walking Running Guide will be an excellent companion for those who are looking to get out and about to walk or run around Limerick. Limerick is an ideal city to explore on foot, and both visitors and locals are encouraged to amble along the city’s recreational riverside routes or follow in the footsteps of some of Limerick’s legendary athletes on one of the Olympic running trails.

The routes are shown on specially produced maps with all the main landmarks highlighted, so walkers know the track route. In addition to the routes, the various parks around Limerick are included so walkers and runners can include them as part of a fitness regime. There are looped routes and exercise stations in many of the council-run parks listed in the new guide, such as Mungret Park, the People’s Park, Castletroy Park, Shelbourne Park and O’Brien Park on Clare Street.

To accompany your journeys around Limerick, there is a suggested music playlist, all combined to get people out and about and enjoy a walk or run. Limerick’s beautiful and thought-provoking street art is also featured, the latest of which, the Sionna mural on Bridge Street, is on one of the routes.

And for those who are looking for something a little longer and more challenging, the guide has details of 15 trails across County Limerick, from the Glin Heritage trail to the Castlegale Loop and the Great Southern Greenway Limerick to the Ballyhoura Way.

Laura Ryan, Head of Marketing & Communications in Limerick City and County Council said: “Limerick has a myriad of walking and running trails, not all of them are very well known. This guide was initially devised for visitors to Limerick city as it highlights six of the more popular routes for those out for a walk or run. But it’s also a handy guide for locals in Limerick to use, particularly with Operation Transformation on the TV and many beginning to train for the Bon Secours Hospital Great Limerick Run and other events taking place in the Mid-West.

“We have expanded the guide to include routes across the county for the more adventurous and while we can’t show them all, you’ll find a full and comprehensive listing on Limerick.ie. The aim is the same, get some exercise outdoors around Limerick and enjoy our beautiful city and county- walk it, run it, love it!”

Launching the guide along the City Centre to The University of Limerick Riverwalk were Niamh Morgan, Limerick City and County Council, Kathleen Kennedy and Elaine Shea of the Limerick Sports Partnership. Picture: Alan Place.

For those who have rekindled or sparked up a love affair with walking or running and want to take on a new challenge, the Limerick Walking Running Guide also has a list of diary dates for those who wish to set themselves a new challenge. How about running the Bon Secours Hospital Great Limerick Run, the weekly Park Runs or the Ballyhoura Active Series of Road Races, or why not get on your bike for Bespoke – Limerick’s Cycling Festival? All the details are in the guide.

The guide also ties in with the objectives and aims of Limerick Sports Partnership, Healthy Limerick and Healthy Ireland as a means of helping locals and visitors to Limerick in becoming healthier.
Guides are available at locations across Limerick city and county or can be downloaded from Limerick.ie where a fully comprehensive list of all Limerick’s walking and running routes can be found.