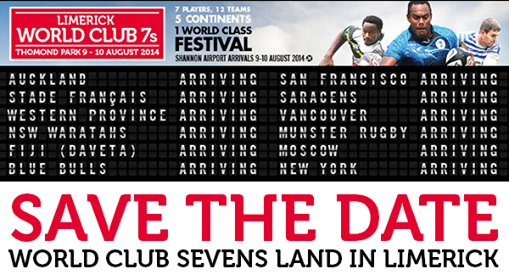 What: Limerick World Club Sevens
When: August 9 – 10
Where: Thomond Park

Seven players on twelve teams from five continents all at one venue, it can only mean one thing right?

The World Club Sevens Series is taking place this weekend and if you’re looking for some fun and entertainment then Limerick is without a doubt the only place to be.

Thomond Park will play host to some of the biggest names in club and provincial rugby from around the world with the kick-off of the World Club Sevens two day festival.

This is the first time an event of this kind has taken place in Ireland and Limerick is set to be packed with rugby fans from all corners of the globe.

The Stadium will be open from 10.30am daily. The party will then kick off with matches commencing on both days at 11.30am. The games are set to run until 18.45 on Saturday and until 17.30 on Sunday.

Tickets for the World Club Sevens Series are available from Ticketmaster and are also available on the day at the stadium as well as from usual outlets.

For anyone who wants to know more about the event you can find the World Club Sevens webpage here!
Or why not check out their Facebook page or Twitter!