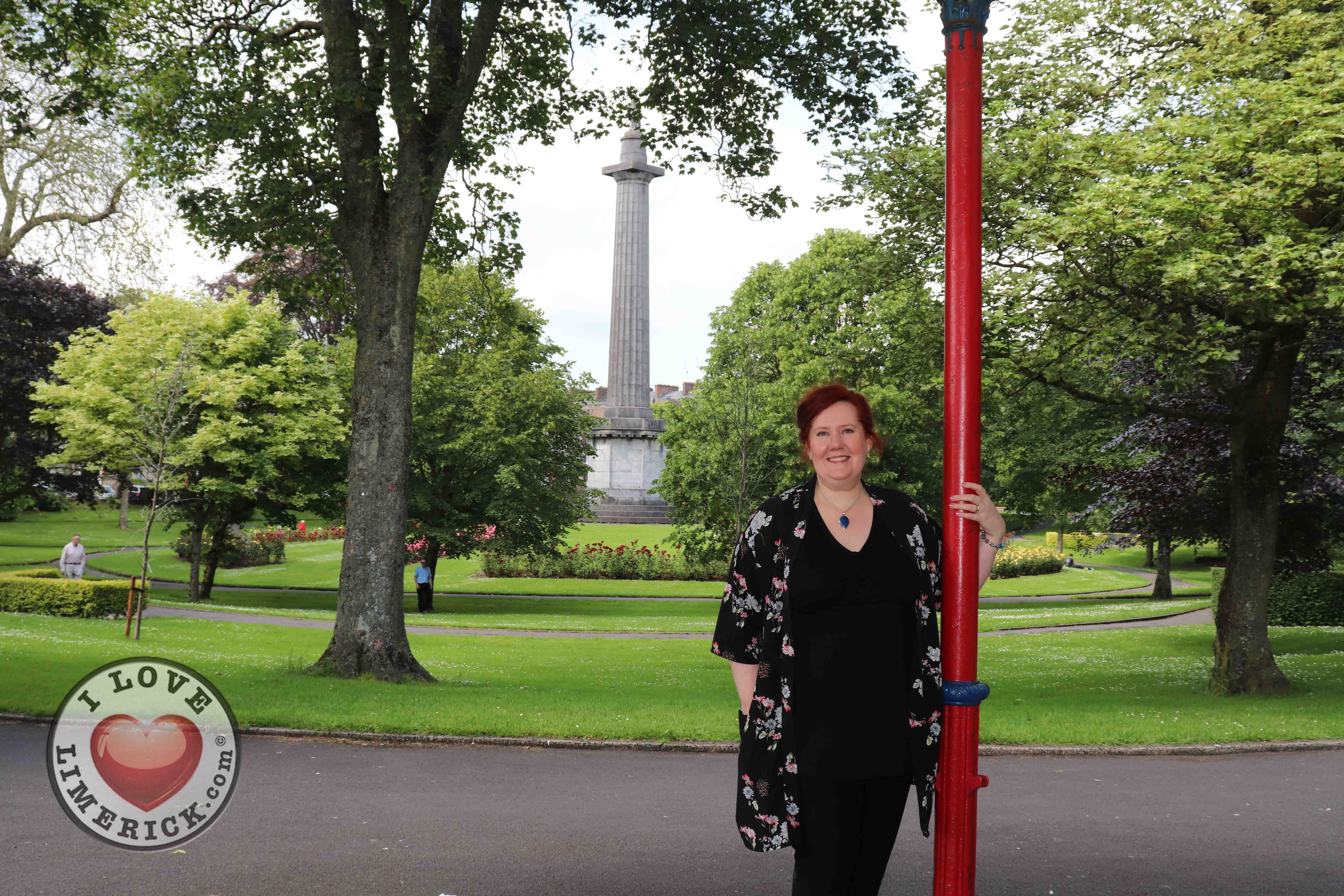 Pictured in the Peoples Park, Limerick for the promotion of the smash-hit musical Angela’s Ashes, The Musical is Limericks Amanda Minihan who plays Grandma. Picture: Conor Owens/ilovelimerick.

Limerick actress, Amanda Minihan, is set to star in the smash-hit musical, Angela’s Ashes, The Musical, as it returns to Limerick this summer. Amanda will take on the role of ‘Granny,’ who she describes as ‘a real character,’ and is delighted to represent Limerick as the show travels across Ireland and the UK. Angela’s Ashes, The Musical is an emotional telling of childhood in Limerick and beyond, featuring unforgettable songs and melodies, told with rare lyricism and a warm inimitable sense of humour. The musical will return on Thursday, July 18.

After breaking box office records at the Lime Tree Theatre in 2017, Angela’s Ashes, The Musical comes home for a strictly limited run. Acclaimed by critics and audiences alike the Limerick run marks the beginning of the musicals next chapter with performances scheduled for Dublin, Cork, Belfast and the UK.

The musical, based on Frank McCourt’s Pulitzer Prize-winning work and brought to the stage by acclaimed producer Pat Moylan with composer Adam Howell and writer Paul Hurt, returns to Limerick for 11 performances only prior to a UK and Ireland tour.

Amanda Minihan recently spoke to ilovelimerick about having the opportunity to play the character of ‘Granny’ in the upcoming Angela’s Ashes, The Musical:

When did you discover your love for acting and theatre?

Oh, that’s an interesting question because Mam and I had a conversation recently, and she informed me that I used to sing my two triplet sisters to sleep. I was like, “Oh really, did I used to sing from such an early age?” And she said, ‘Yeah!”

So, I suppose I always sang and was always encouraged by my parents to keep doing it. I had a great passion for it. I loved it! My Grandmother used to sing, and so my passion for performing was from my Mam’s side of the family really.

When was your first acting role?

My first one? Oh, my goodness! I went to Limerick College of Art & Design here [in Limerick], whilst I was there, I also was a Bunratty Castle Entertainer. So, I would sing out in the Bunratty Castle during the banquets there. Then I did amateurs work with The Cecilian’s. My first professional acting role was for Mike Finn’s play, Pigtown, where I played Mrs Sheehan, in 1998.

Is your family involved with theatre also?

No, they’re not. My sister’s quote, “One is enough for any family.” My Grandmother on my mother’s side used to sing. But the girls [her two triplet sisters] are able to sing but they have no interest in pursuing it, whereas I did.

What do your sisters do?

Jackie studied electronics out in Moylish. Elaine studied accountancy but she also does flower arranging.

When did you move to London? Why?

I moved to London in 1999, to do a one-year post-grad in Musical Theatre at the Mountview Academy of Theatre Arts. So yeah, it was to study, but it was also to follow my dream. To see if it would work. My parents helped me through art college, so I did a lot of fundraising, where a lot of Limerick people helped me.

What has been your biggest achievement so far?

I felt when I was leaving Limerick to go to London, that I still wanted to do Limerick people proud, and to fly the Limerick flag. For me, to get into the West End was a massive bucket tick list for me. I did a lot of shows there [the West End], Blood Brothers was my main one because it’s based on twins who were separated at birth. I couldn’t believe I got that part; I was thrilled.

I then did The Producers for two years on the West End, and then a year on tour. Following that, I did Sister Act, and then Merrily We Roll Along – they’re all West End.

That was massive for me, but then, of course, when you’ve done it, it’s the same as every other show, no matter where it’s at. You still do the same amount of rehearsals, you still do the same grafting; so then to come home with all those shows behind me, it’s like I’ve done a full circle.

Who has been your favourite person to work with?

That’s interesting. Well, you always find someone in a show that you’re in awe of, that you look up to and admire, someone to learn from. Whether that’s a cast member or ensemble member or if it’s someone playing a part, you still learn from somebody.

Obviously, all the Limerick people, the typical names like, Mike Finn, Terry O’Donovan, working with Marie Boylan, the Wildebeest Theatre Company – that’s been phenomenal. I still get a kick out of that, I’m like oh my god, that’s the crème de la crème of Limerick, and I’m with them.

I’ve sung with friends of mine who also studied in London, so there would have been Jessica Bray, Helen Catherine Ball, Janet Woods, and we all did a concert here together. Which was brilliant because we all trained in London, but we all started here [in Limerick]. Jean Holmes, I did my first singing lessons with her at the School of Music when I was 12. Then went onto Olive Cowpar, with lessons with Marie Walsh following that. Continuing on, I sang in Bunratty with Colette Davis, and then took part in acting centre stage with Richie Ryan. I also did amateur dramatics with The Cecilian Musical Society. LMS [Limerick School of Music] was just starting up when I was leaving then. I got great support from everyone.

When you’re in a show, you’re in awe of everyone. Nathan Lane was brilliant from The Producers, Lee Evans, Mel Brooks, Whoopi Goldberg, Sheila Hancock, Maria Friedman.

What was the most memorable advice that you have received?

The best advice that I got was from my Dad, who always said: “Be true to yourself, and always be kind.” Which has become my mantra really – it costs nothing to be nice. 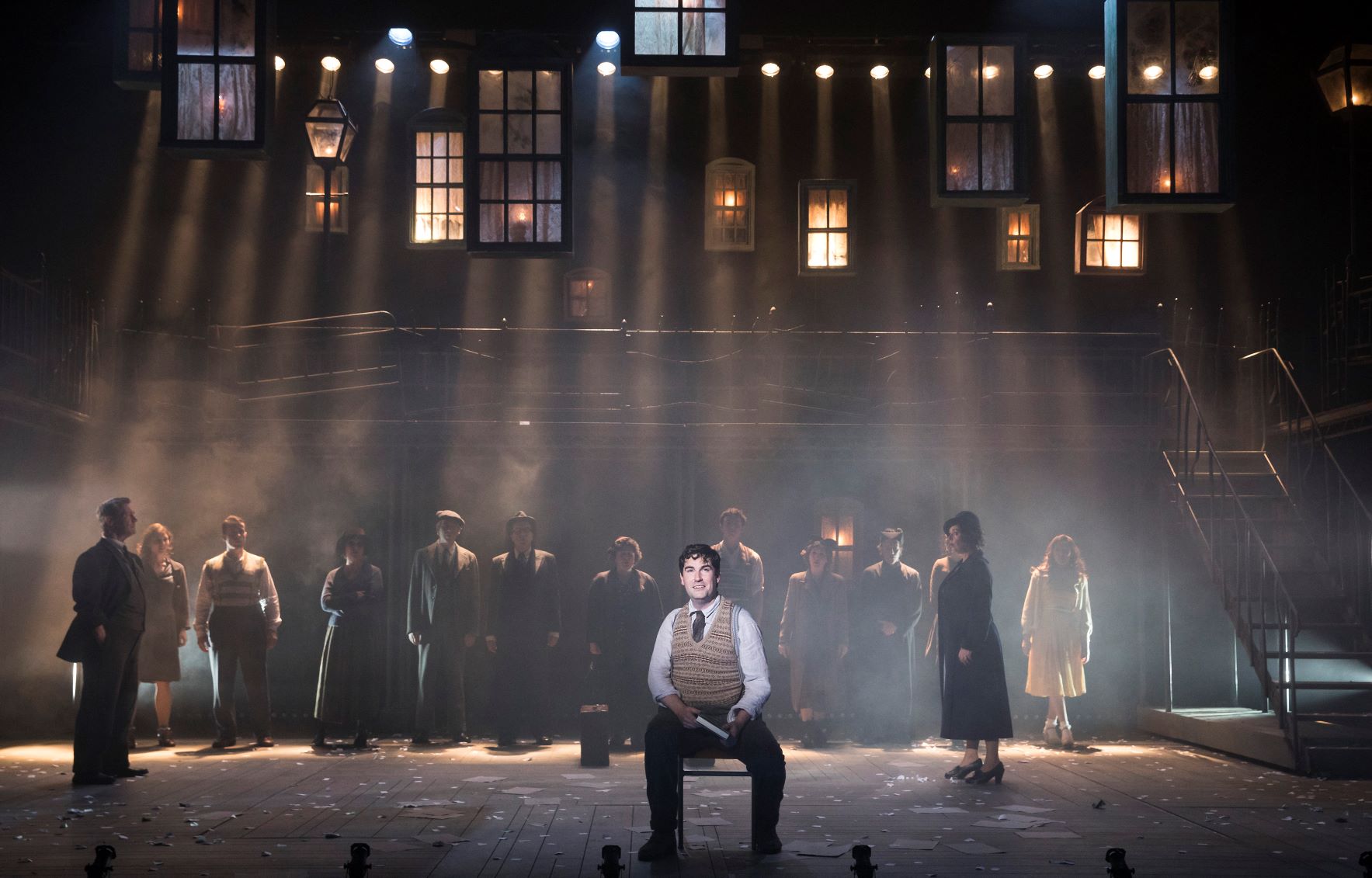 Eoin Cannon as Frank (centre) with members of the cast of Angela’s Ashes, The Musical. Photo: Patrick Redmond.

If you could play any other character in Angela’s Ashes, who would it be?

As Angela’s Ashes, The Musical will be travelling around Ireland and the UK, which city are you most looking forward to performing in?

All of them! I’ve never been to Belfast, so I’m dead excited to have the chance to explore it now. I am thrilled to be exploring Ireland, as every place is different. Belfast: can’t wait. Dublin: I haven’t been back there for years now. Cork: I haven’t been to Cork in I don’t know how long. Sure I’ve been in London for 19 years, and to come back and explore Ireland again is great.

My husband is American, so he’s going to come over to some venues when he is free, so we can explore some places together.

What’s next after Angela’s Ashes, The Musical?

I did a film before Angela’s Ashes, and it will hit the festival circuit in October/November, I think. So, I will be promoting that.

If you could give one reason why the people of Limerick should go see this play, what would it be?

There are so many emotions in it when you watch it. I went to see it in Dublin before and I belly laughed, then seconds later I bawled, and then I was laughing again. So, it’s like a rollercoaster of emotions. Which is brilliant for an audience, as it keeps you on your toes and brings you on a journey, and for me, that’s the kind of show I love.

What role would you love to play?

When I started off in London, I was always told “you’re too young to play them,” now I think I’m at the right age. I would love to play Mrs Lovett in Sweeney Todd, Madame Thenardier in Les Miserables, Mrs Johnstone in Blood Brothers – I played Mrs Lyons, who was the posh mum, but I’ve always wanted to play Mrs Johnstone. Something with heart or characters with a twist. They’re the ones that excite me.

What are your current goals?

Just to get back on stage and be in the heart of it all again. I love writing aswell, so that’s a new branch for me. I like to write about different characters.

Finally, if you could go back in time, what would you say to your younger self?

Enjoy life, and just take chances. And again, going back to my father, “Always be kind. It’s free.”

Lime Tree Theatre is delighted to host the opening eleven performances of Angela’s Ashes, The Musical before it embarks on an extensive tour. Don’t miss this hugely popular musical, a rare treat right on your doorstep!

The musical will return on Thursday, July 18. The times and ticket prices vary depending on the date.

Tickets can be bought here.

For more information on Angela’s Ashes, The Musical, go here.

For more stories on Angela’s Ashes, The Musical, go here.