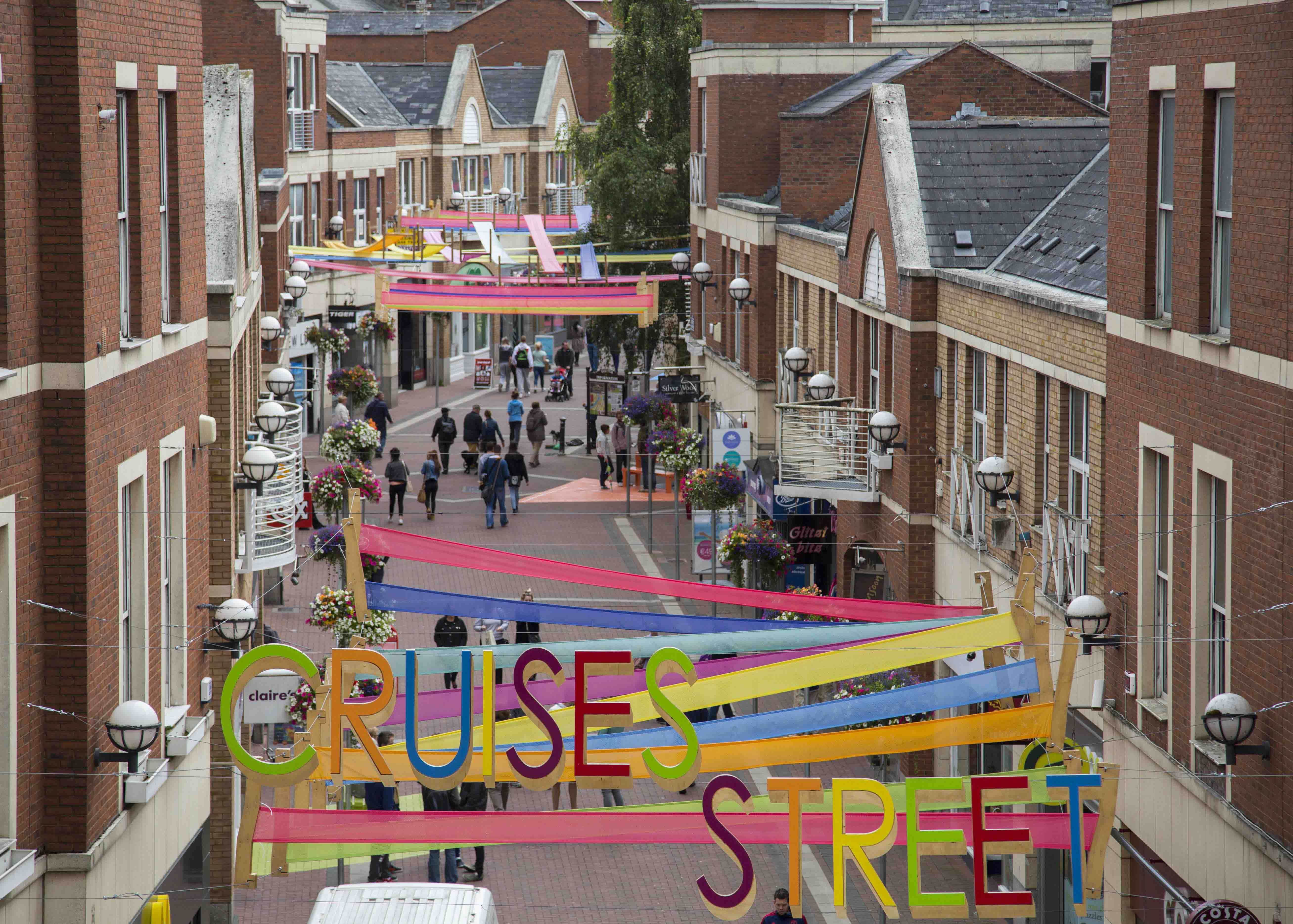 Limericks Cruises St sees benefits from free public wifi and splash of colour. Free public wi-fi, street furniture and an array of colourful art pieces have been introduced to one of Limerick City’s busiest shopping thoroughfares as part of an initiative aimed at improving and animating Limerick’s retail core and driving footfall in the city centre.

Limerick City and County Council’s pilot Urban Garden Project, which was initiated during the summer with the development of a vibrant urban garden in O’Connell Street, has now been extended to neighbouring Cruises Street.

The street has undergone a colourful transformation with the provision of street furniture, free public Wi-Fi, overhead animations and a ‘Kites in Flight’ installation created by the graduate team at FabLab Limerick in Rutland Street.

The Local Authority says plans are also afoot for new ‘parklets’  outside Aroi on O’Connell Street, permanent seating, demonstration kiosks for Limerick City Centre businesses and a structured children’s play area outside Penneys.   It is also planned for innovative uses of the laneways off Cruises Street to create an open-air art gallery.

Limerick City and County Council Director of Economic Planning and Development, Pat Daly, said the changes are part of ‘an evolving pilot urban project’ and public views on the new developments are most welcome.

“The public response to this pilot urban project has been very encouraging and has led us to exploring its possible expansion with the inclusion of new features that inject some creativity and colour, as well as an enhanced shopping experience in O’Connell Street and Cruises Street,” commented Pat Daly, Director of Economic Planning and Development, Limerick City and County Council.

“The Urban Garden Project has received wonderful support from the local business community while feedback from the public has played a key role in what we are doing with these city centre locations. Our plans for the delivery of transformational sites as part of our Limerick 2030 project are on schedule but with this pilot initiative, our aim is to demonstrate that change can happen in our city centre without large-scale development,” added Mr Daly.

The pilot Urban Garden Project was last week shortlisted in the ‘Enhancing the Urban Environment’ category of the 2015 Chambers Ireland Excellence in Local Government Awards. The project is one of five Limerick City and County Council initiatives shortlisted in the annual award scheme.

Comments from members of the public on the new Urban Garden can be posted to Economic Development Department, Limerick City and County Council, Patrick Street, Limerick or emailed to e[email protected].

Join the conversation on Twitter using the hashtag #LKUrbanGarden