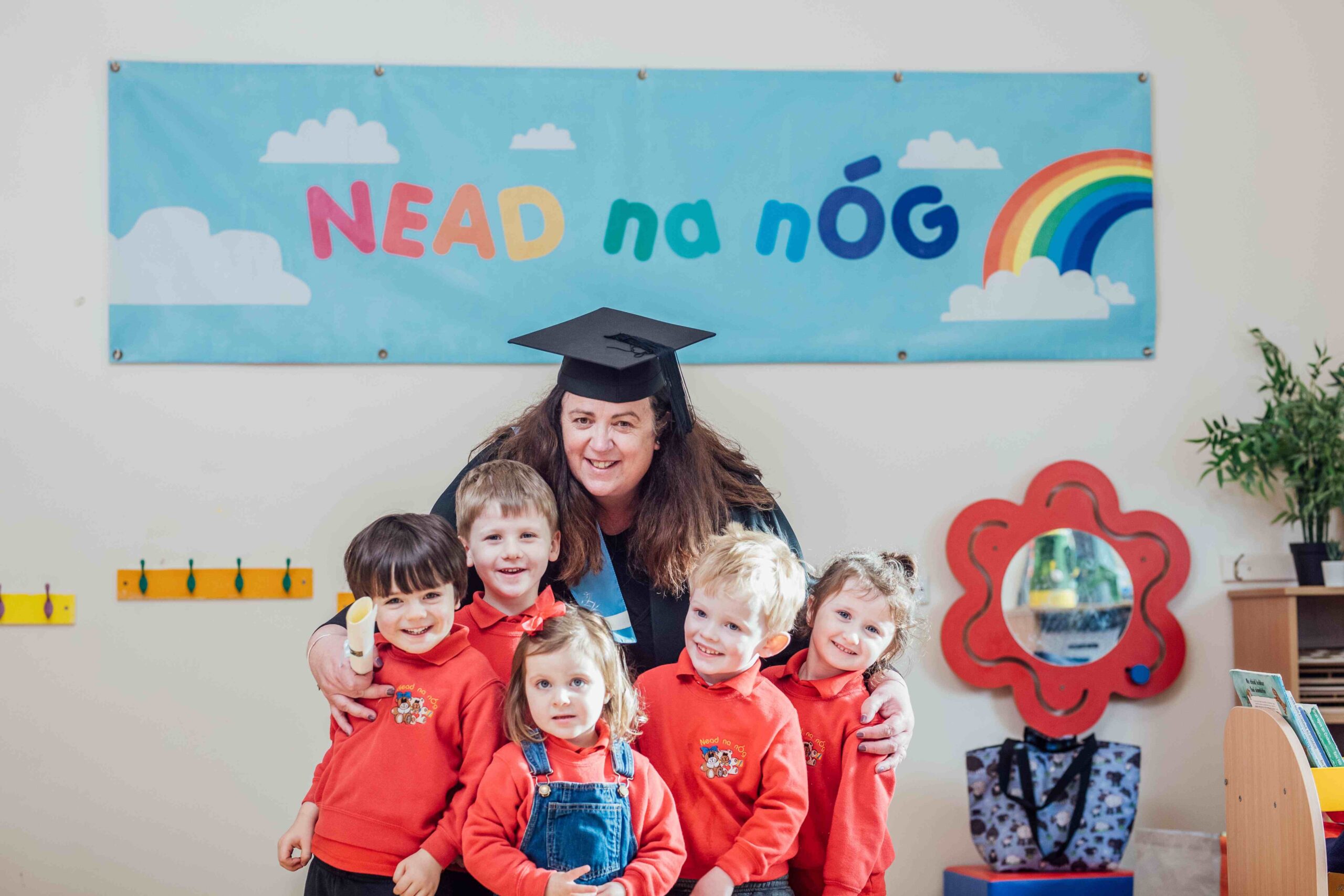 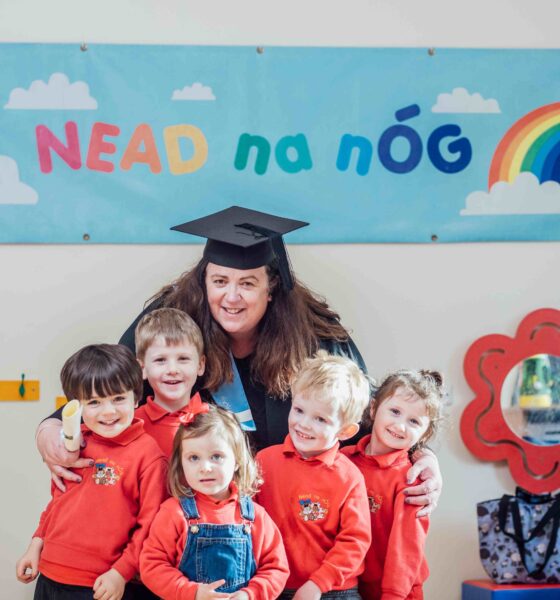 LINC Programme Virtual Graduation – pictured was Eithne Enright from Kilmallock, Co Limerick an Early Childhood Teacher at Nead na nÓg Preschool with some of the children at the ELC setting, who was conferred in absentia with a Level 6 Special Purpose Award along with 585 other graduates nationwide, hailing from 26 counties and 22 countries. 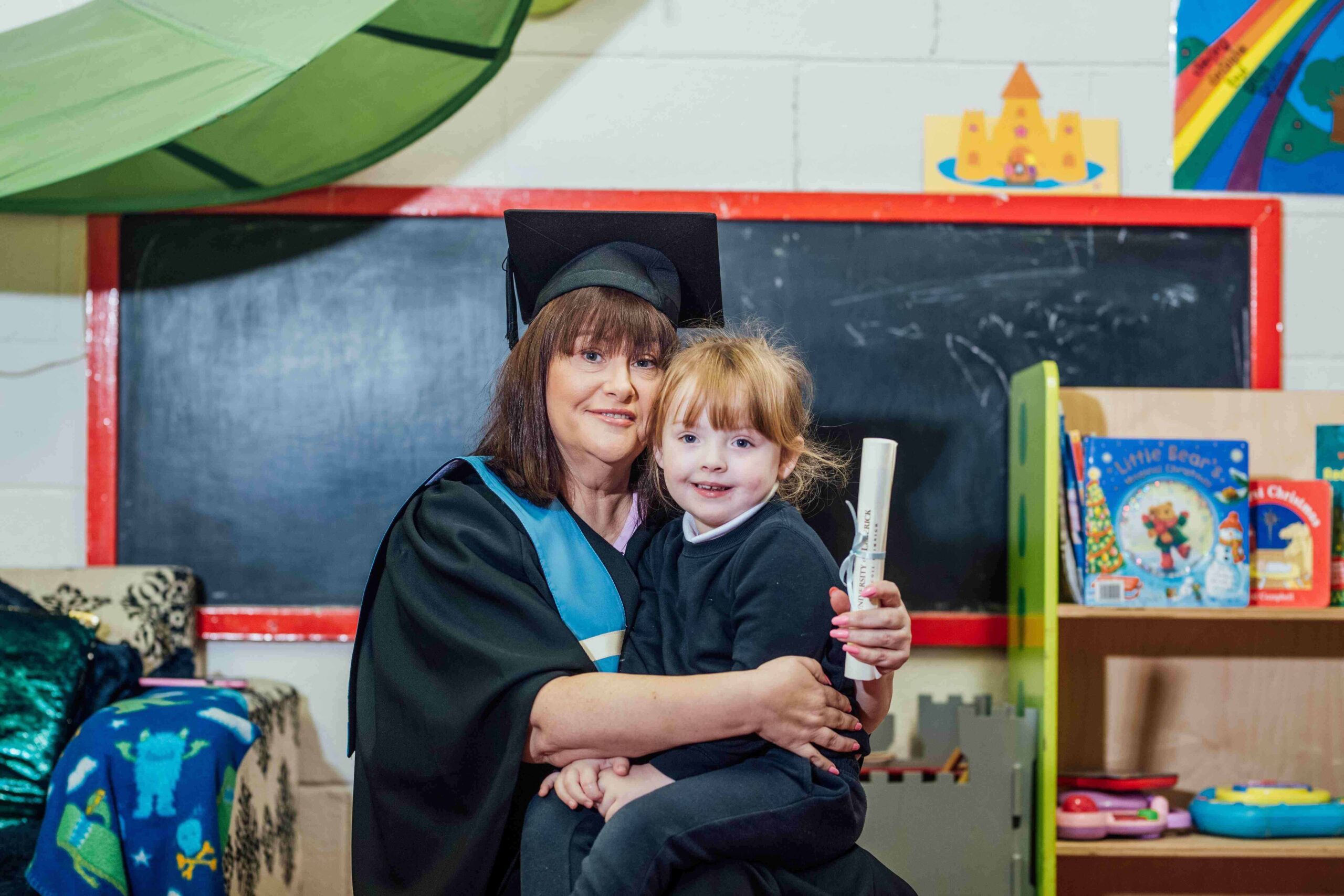 Speaking ahead of a LINC Programme Virtual Graduation Ceremony, which took place at Mary Immaculate College (MIC) on November 20 and celebrated the graduation of 585 LINC Programme students, the Minister for Children, Equality, Disability, Integration and Youth, Roderic O’Gorman T.D., said that: “The LINC Programme has been a key contributor to the success of the Access and Inclusion Model (AIM) in supporting the inclusion of children with disabilities in the ECCE programme.”

“I would like to congratulate all 585 graduates from the LINC programme. I am hugely appreciative of the excellent work of the LINC consortium team, led by Mary Immaculate College, and of the commitment of early learning and care practitioners in fostering an inclusive culture in their services.

The impact of the LINC programme since its inception has been extremely positive and I encourage all early years practitioners to avail of this opportunity.”

The  LINC Programme Virtual Graduation Ceremony, which was held virtually due to the current surge in Covid-19 cases, saw the fifth cohort of students graduate from the Leadership for INClusion in the Early Years (LINC) programme. This year, 585 students from 26 counties and 22 countries were conferred in absentia with a Level 6 Special Purpose Award. They joined a community of 3,504 graduates, conferred since 2016.

LINC, established in 2016, is a higher education, fully-online programme designed to enhance the inclusion of children with additional needs in early learning and care settings through the development of the role of Inclusion Coordinator.

WATCH: yesterday 585 students graduated virtually from the LINC Programme, among them was Eithne Enright from Limerick. We recently visited her setting to find out a bit about her experiences, congrats to Eithne and her fellow graduates on their achievement.#LINCGraduation pic.twitter.com/z3oV1hkirz

— Leadership for INClusion in the Early Years (@LINC_programme) November 21, 2021

The programme, offered by a consortium led by Mary Immaculate College and including Early Childhood Ireland and Maynooth University – Froebel Department of Primary and Early Childhood Education, is part of a Government commitment to the provision of high quality education and training in the field of early childhood care and education and was introduced as part of the Access and Inclusion Model (AIM) in 2016.

Speaking at the LINC Programme Virtual Graduation Ceremony, Professor Eugene Wall, President of MIC, said “The LINC graduation symbolises the significant contribution of all early years’ educators to the creation of enriched inclusive early years’ experiences for all children,” Prof. Wall continued by recognising the graduates’ commitment to inclusion in the early years, which will “continue to contribute to the creation of a more inclusive society for all of us”.

Also offering congratulations on the day on behalf of the LINC Steering Committee was Professor Emer Ring, Dean of Early Childhood and Teacher Education at MIC, who said: “The LINC Programme remains an agent of change in presenting powerful pathways to creating early childhood environments where diversity is the norm. We are very proud of our graduates’ achievement in completing the LINC Programme, while we continue to live through the biggest pandemic of our generation. We would like to wish them the very best in the years ahead as they continue to make a real difference for children, families, their colleagues, and the wider society in their work as Inclusion Coordinators.”

A sentiment echoed by Shirley Heaney, National Coordinator of the LINC Programme who added: “I would like to commend each graduate for your dedication and perseverance in completing the LINC Programme in these challenging and unprecedented times. As Inclusion Coordinators, I know that you will play a vital role in supporting and advocating for the inclusion of all children within the Early Learning and Care sector. Through leading an inclusive culture, practice and pedagogy in your settings you will enrich the lives of children and their families. On behalf of myself and the entire LINC team congratulations on your achievement!”

A number of award winners were recognised for their remarkable achievements over the course of the ceremony including Niamh Whelan from Wicklow Town, who was awarded a College Gold Medal for achieving first place on the programme. Also receiving an award was Sonya Curren, Kilmessan, Co. Meath who won the Early Childhood Ireland Best LINC Portfolio Award.

Earlier this year, the LINC programme received a Highly Commended STAR Award. The STAR Awards are organised by the national adult learning organisation, AONTAS, as part of its annual Adult Learners’ Festival. They recognise and celebrate the achievements of adult learning projects throughout Ireland. The programme has twice been the recipient of the Best Online Learning Experience Award at the Education Awards; these awards encourage and celebrate excellence in the third level education sector on the island of Ireland.

The LINC programme is free of charge to participants and employers, and is funded by the Department of Children, Equality, Disability, Integration and Youth. Early learning and care settings with an ECCE contract can nominate an employee for LINC and the nominee must have a full Level 5 Award or higher in a relevant discipline.

Further information on the LINC Programme can be found HERE

Related Topics:LINC Programme
Up Next