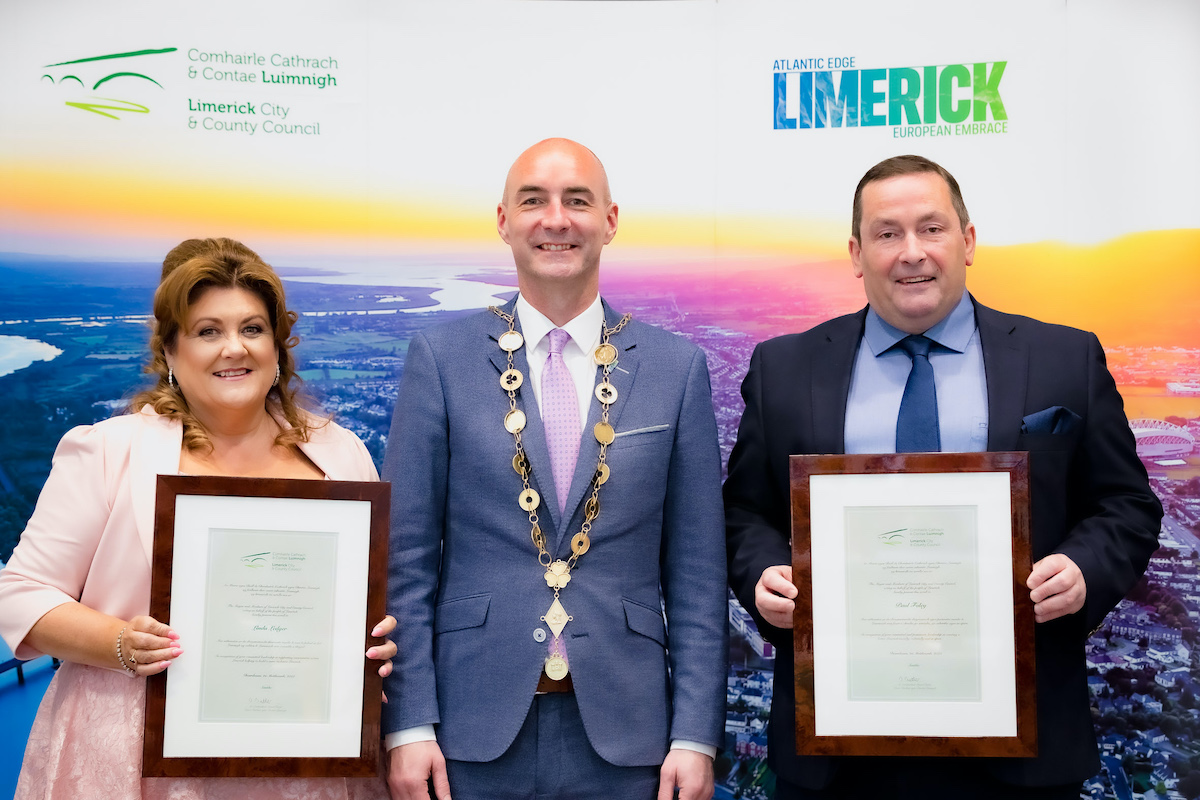 Two hardworking and well-known Limerick faces, Linda Ledger and Paul Foley, were honoured with a Mayoral reception on Thursday, June 2 at the Council Chamber in Dooradoyle.

Linda Ledger, Manager of St Munchins Community Centre, was honoured for “supporting communities across the city and helping to build a more inclusive Limerick”, while Paul Foley received his honour for his ”passionate leadership in creating a better Limerick socially, culturally and in sport.”

The reception was led by Mayor of Limerick City and County Council, Daniel Butler, who kicked off the evening by noting, “Tonight, both Paul and Linda will become part of the civic history of Limerick City. They already are a part of Limerick’s history, but this will formally recognise them as so. Both individuals, their names and their achievements, speak for themselves.”

Linda is the CEO and Manager of St Munchin’s Community Centre in Kileely, which has played a massive role in promoting community involvement and development in Limerick City since opening its doors in 2005. The centre and adjoining St Leila’s Age-Friendly Community Education Campus are vibrant hubs of community activity and education, with booming services such as Meals on Wheels and a hair salon also on offer.

During the Covid-19 pandemic, St Munchin’s Meals on Wheels service delivered more than 85,000 meals across Limerick city and county, as well as 2,590 food parcels to children in need.

In recent months, the centre has been transformed into an emergency evacuation centre for Ukrainian refugees fleeing the ongoing war. St Leila’s Campus has seen its classrooms repurposed as dormitories, and St Munchin’s is currently fundraising to purchase two modular units to house additional Ukrainian arrivals.

“Linda Ledger is an energy and a force that is based in a passion for her community, a passion for people and a passion for change. Through that passion, Linda changes lives every single day,” stated Mayor Daniel Butler.

“She is held in such high regard by people within the Kileely community, people who work in the community and in leadership within the City Council as well.”

Accepting her honour, Linda humbly commented, “I feel honoured and privileged to be here tonight, but there is a whole team behind me that this is also for. St Munchin’s is way bigger than just me. We have staff all over the city, and this honour is a credit to them and everything we do together – I am just one part of a bigger picture.”

She welcomed ‘anyone and everyone’, to the centre, saying, “Anything we have at St Munchin’s, anyone from across the city is welcome to.”

Paul Foley is a Limerick poet and former Senior Executive Officer of Limerick City and County Council. Passionate about the arts, Paul played a significant role in securing and executing Limerick City of Culture 2014, which was a huge success at the time.

His passion for the arts in Limerick is shadowed only by his great love of and work within the GAA, currently serving on the organisation’s Munster Council.

“The leadership Paul has provided within a plethora of sectors of Limerick society has been incredible,” stated Mayor Butler.

“He has worked hard from the background, looked for no credit and did what was in the best interest of the individual, the organisation and of Limerick. We are very blessed to have him, and to present Paul with this honour is an honour for me as well.”

Of his accolade, Paul said, “I loved working with Limerick City and Council for almost 31 years. It gave me the opportunity to work with people and get to know people, and also to work side by side with great people from Limerick city and county. This really means a lot to me, and I am so grateful.”

Congratulations to Linda Ledger and Paul Foley on this well-deserved recognition of their work!