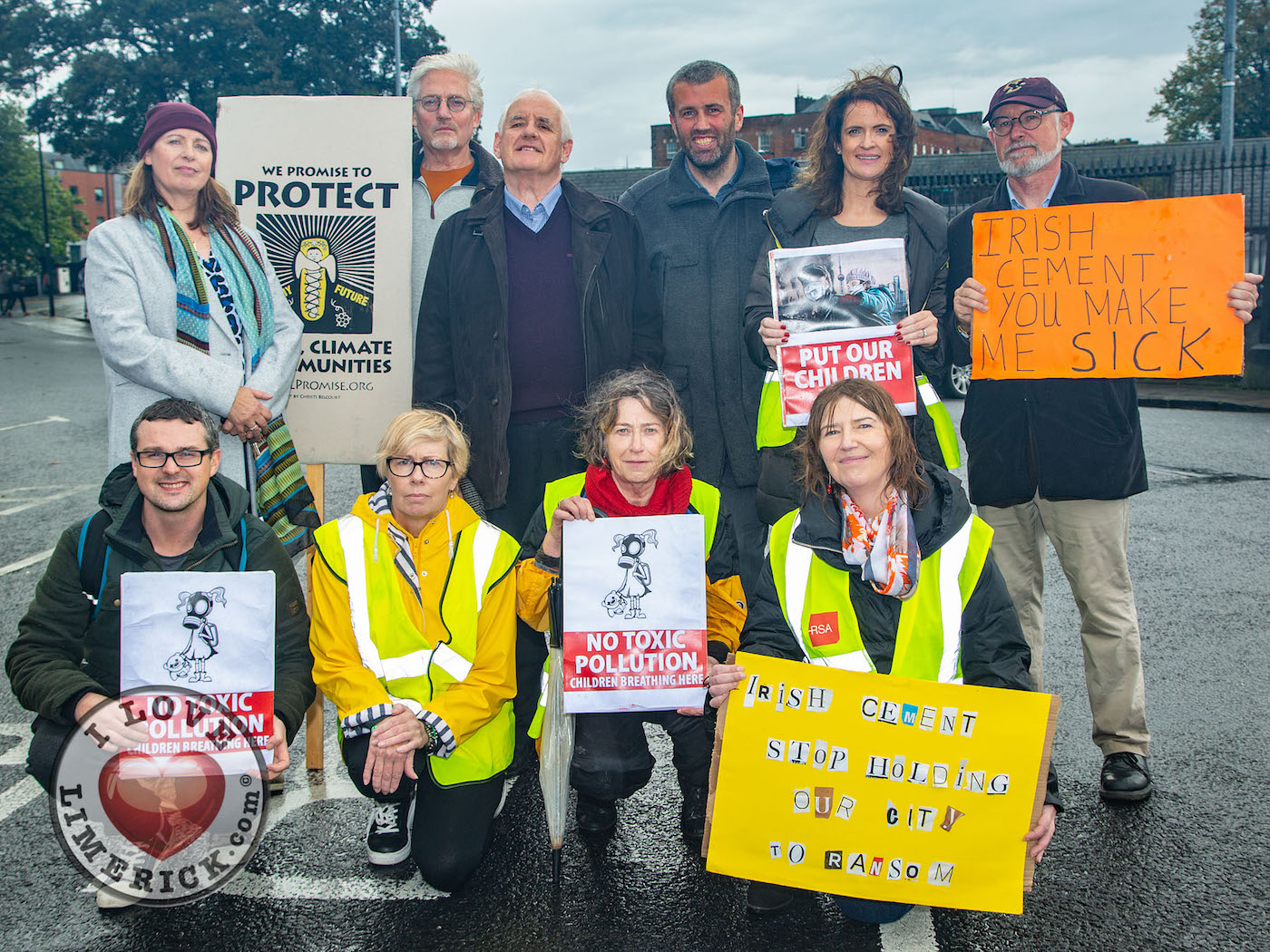 Claire O’Dowd is joined with Richard Lynch and Elysha Folan to look at this week’s Local Business, Events, Sports, Arts and Entertainment news around Limerick.

Discussed in the opening episode of I Love Limerick’s Podcast show was the recent events that took place in Limerick last week. To start Elysha talked about the Hero of the week, 40-year-old County Limerick mum Meg Wiley Curran has exceeded her goal of raising €25,000 for the Mid-Western Cancer Foundation through her successful fundraiser events, Pinkalicious by Megalicious.

Meg, a native of Kilmallock, has stage four metastatic breast cancer and has become a beacon of light in the community, with her hard work and determination to turn her diagnosis into a positive force through various fundraiser events. On Friday, October 4,  Pinkalicious by Megalicious organized a screening of ‘Calendar Girls’ in Friars Gate Theatre, Kilmallock, with all proceeds going to the Mid Western Cancer Foundation. It was another successful event with a big announcement.

Previously Meg organized a ‘pink’ themed party in Mike Houlihan’s 41 bar in Kilmallock. It was a huge fundraising success with all proceeds again going to the Mid Western Cancer Foundation. Determined to do more, Pinkalicious by Megalicious organized another fundraiser event, ‘From My Wardrobe to Yours’.The people of Kilmallock and beyond were asked to donate dresses, skirts, tops, pants, and bags suitable to be sold in Colaiste Iosaef secondary school.

Next Claire discussed the Stand Up For Mental Health – Limerick campaign said they have no choice but to call another protest to highlight the lack of action being taken by the Council to address the mental health crisis in Limerick. They are insisting that Limerick City and County Council need to provide adequate funding for mental health in their upcoming budget in November.

Antoinette Sheppard, who attended last months protest at the full Council meeting, said, “The families of suicide victims and activists with the campaign were given a commitment by the Council chief executive, Dr. Pat Daly, that they would meet with us to discuss possible interventions which we think would alleviate the current crisis. We requested this meeting and have since been met with a wall of silence. This shows a blatant disregard for those families who seek action and leadership from the Council. If they continue to ignore us, we will just shout louder. This crisis isn’t going away any time soon, and neither are we!’

The SUFMH protest will begin at City Hall, Merchants Quay on Saturday 26th October at 12.30 pm. Protesters will march to an undisclosed vacant Council building, where they will engage in a sit-down protest. A rally will also take place. Anyone interested in fighting for better mental health services is welcome. Organizers are asking people to bring along banners and flags. See the Stand Up For Mental Health – Limerick Facebook page for more information.

In further news, Richard talked about the protest organized by Limerick Against Pollution (LAP), a group of concerned residents who live near the Mungret plant. The group’s spokeswoman, Claire Keating said, “they would appeal the EPA decision and, if necessary, they would take their protest to the European courts.”

Thousands of Limerick citizens, businesses and politicians took to the streets on Saturday, October 5 in protest of the Environmental Protection Agency’s (EPA) decision to allow Irish Cement to burn 90,000 tonnes of waste in Mungret. Even with the rain pouring down, the turnout was amazing and showed the passion of the Limerick people shining through a desperate situation. The streets of Limerick were adorned with people from near and far who came to make one last effort to overturn the EPA’s recent decision, which will be taking a huge step backward in Ireland’s Climate Action plan.

Despite receiving over 4,000 objections, the Environmental Protection Agency (EPA) upheld a decision by An Bord Pleanala, as well as Limerick City and County Council,  to allow Irish Cement burn used tires, animal waste, sludge, plastics, and other waste at its plant in Castlemungret.

In positive environmental news, Elysha discussed the upcoming Junk Kouture 2020. Michelle Visage of Ru Paul’s Drag Race will swap drag for junk as she is set to judge the final of Junk Kouture 2020. Michelle will be joined on the panel by Louis Walsh, a colleague of hers from Ireland’s Got Talent, to judge the competition which encourages students in Ireland to make fashion from junk materials.

Michelle, who is currently starring in Strictly Come Dancing says she will be coming straight from the ‘Strictly’ ballroom to the launch. Michelle said, “I am thrilled to be involved in this fantastic competition. Now more than ever, making environmentally conscious fashion choices is important.

This year, with climate change awareness being particularly high, the competition’s emphasis on recycling is more relevant than ever. Secondary school students from the five regions North, South, East, South East, and West are once again invited to enter this year’s competition.

Teachers can register their schools to participate from today, October 1 until Friday, November 1, 2019, while students hoping to take part should work on their entry designs from now so they are ready ahead of student registration in January 2020.

Another amazing competition for young people in Ireland that Richard discussed was Ireland’s Young Filmmaker of the Year 2020, Ireland’s festival celebrating young filmmakers from Ireland and overseas is open!

Fresh Film is an advocate for young filmmakers and encourages young people to make films by hosting the annual Fresh International Film Festival which incorporates Ireland’s Young Filmmaker of the Year Awards. Fresh International Film Festival 2020 takes place in Limerick from March 23 – 28, 2020 and is open to young people from 7-18 years of age.

2020 will be its 24th year encouraging young people from Ireland and overseas, to create, exhibit and share films. The Fresh International Film Festival provides an opportunity for young filmmakers to see their work on the big screen and to compete for the title of Ireland’s Young Filmmaker of the Year and to win €1000 towards their next film.

Further details and application forms can be found at www.freshfilmfestival.com. The closing date for entries is Friday, January 24, 2020.

Claire then gave us some information on the Islamic Cultural Exhibition that will take place on Saturday, October 19 from 12-5 pm at Pery’s Hotel, Glenworth Street Limerick. The free exhibition is open to the public and includes calligraphy, artifacts, henna tattoos, face-painting and traditional artworks.

The aim of this event is to clear up misconceptions of Muslims fueled by the media and integrate them into our culture and Limerick. This event will offer an opportunity to meet, share, discuss and experience the principles and culture of Irish Muslims. Over 49,000 people have already joined Discover Islam on Facebook and interacted with the conversation. The exhibition takes place on Saturday, October 19 from 12-5 pm at Pery’s Hotel, Glenworth Street Limerick and is completely free.

Elysha then talked about the upcoming Opera Workshop 2019 2020, Limerick’s resident opera company is proud to announce its new season with generous funding from the Arts Council of Ireland and Limerick City and Council Arts Office.  Since its foundation by Shirley Keane in 2017, the company has entertained, surprised and delighted Limerick audiences with the ability to produce accessible opera concerts and challenging contemporary, site-specific works.

Shirley Keane, Artistic Director said, “we are gratified by the wonderful feedback from audiences to date.  For such a new and small company, we have managed to make a noticeable and positive impact on Limerick’s cultural scene in a short amount of time.”Opera Workshop has had a wonderfully successful 2018.   On the back of such success, we are delighted to now be developing more ambitious opera productions that are inspired by and reflect Limerick’s past and future.” All in all, a busy, diverse year ahead for this wonderful new addition to Limerick’s cultural life.For more information on the Opera Workshop, you can visit the  operaworkshop.ie

The Limerick woman possesses the rare ability to be able to say she has played both rugby and football for Ireland and is the perfect candidate to represent Limerick in the “Ireland’s Ball” campaign which contains a fingerprint from one sports representative of each of the 32 counties.

Born in Birmingham to a Jamaican father and Limerick’s mother, at only six months old Jackie returned to Kileely, Limerick with her mother where she was to grow up. It was here, Jackie’s mother met and married Mickey O’Brien who became a father to Jackie and together they set up a grocery store.

Mickey came from a sporting background having won an All-Ireland in handball and seen sport as an opportunity for Jackie to mix with others. Jackie said, “In 1961 being a black child in Limerick, you kind of stuck out like a sore thumb”. “Getting on a pitch, putting on a pair of boots, that shy little black kid was gone”.

Soccer became Jackies first love and following the advice from a special teacher of hers named Rita Spring, of St Munchin’s Girls School in Ballynanty, she went on to play for Ireland winning 13 international caps with the Rep of Ireland women’s senior soccer side which she dedicated to her.

Jackie said, “It was always an ambition to play rugby but there wasn’t a women’s rugby team around when I was younger so I came to it later in life”.Within six months, Jackie made the Munster team and within another six months, she made the Irish team.

During her career, Jackie has achieved a number of monumental achievements including playing four rugby seasons, the European Championships over two weeks in Nice and score a try against the Netherlands in the 1998 World Cup. She even made an appearance on ‘The Late Late Show’.