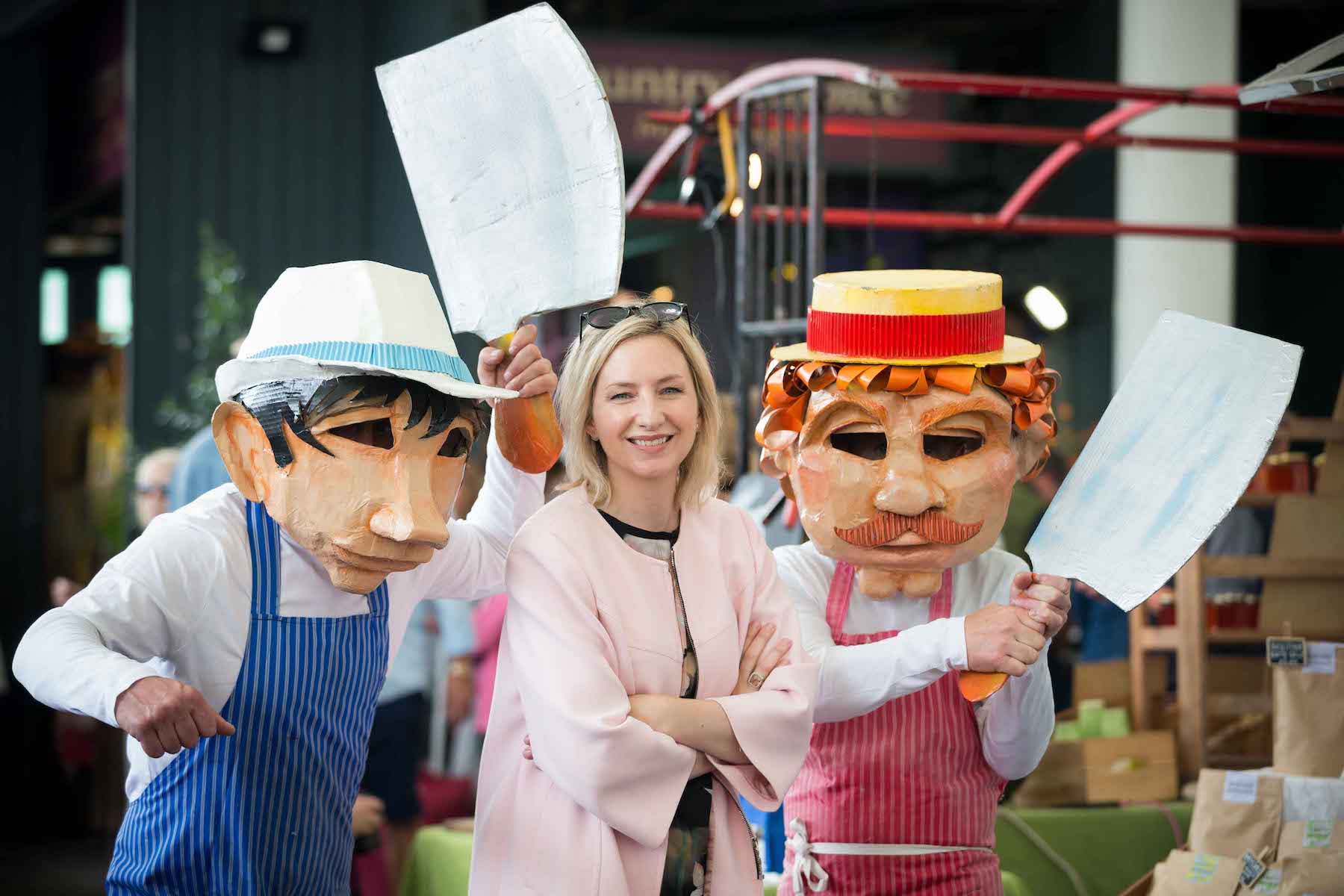 Discussed in the opening episode of I Love Limerick’s Podcast show was the recent events that took place in Limerick last week. To start of the Climate Action Strike 2019 in Limerick City Centre. Over a thousand protesters took to the streets of Limerick city last Friday afternoon in support of the global climate strike. Leading the protest was teen climate change campaigner, 14-year-old Saoirse Exton, who set up Fridays for Future Limerick earlier this year.  Hundreds of pupils, students, and everyday people took part in the march, which set off from Arthurs Quay Park at 1.30 pm, with many carrying signs calling for action.

Next up they discussed The Pigtown Culture & Food Series, which celebrates Limerick’s food culture and heritage, trots out for its third year this September 2019. Inspired by the history of Limerick’s famous bacon industry, it is a program of themed food and cultural events taking place in various venues in Limerick city and county, starting on Culture Night, September 20th with the popular Pigtown Parade. The Pigtown Festival 2019 is developed by the Limerick Food Group and supported by Limerick City and County Council, LEO, and LIT. The Festival runs until October 25.

Then in sports, Aisling discussed the upcoming local sports. In hurling, Patrickswell and Na Piarsaigh will contest the 2019 Bon Secours Hospital County Senior Hurling final. Patrickswell saw off Doon in the first semi-final on a 2-14 to 0-15 scoreline to reach their first county decider since 2016. Current title holders Na Piarsaigh overcame Kilmallock in the second of the Limerick Senior Hurling Championship semi-finals. The Caherdavin men reached their third successive decider following 23 points to 18.

In Local Golf, Limerick Golf Club’s Ciaran Vaughan says winning the Barton Shield was an incredible feeling.  Vaughan teamed up with Michael Reddan and the duo remained unbeaten throughout this season’s competition. He says it’s incredible to be able to play a part in ending the 43-year wait for the club.

In Local Football news, Newcastle West dethroned current champions Adare in the first of the Senior Football Championship semi-finals in Mick Neville Park. Their opposition is yet to be confirmed as St Kieran’s or Oola will battle it out in the second semi-final THIS Friday, September 27 in LIT Gaelic Grounds at 7.30 pm.

In festival news, they discussed the I.NY Festival 2019 celebrating the relationship between Ireland and New York

The third installment of the I.NY Festival 2019 has been announced, running in Limerick from October 16th to 20th at various venues throughout the city. An anchor event within Fáilte Ireland’s Global Irish Festival Series, The I.NY Project explores and celebrates the relationship between Ireland and New York, one story at a time.

The annual I.NY Festival, is one of the central elements of the I.NY Project, bringing the unique relationship between Ireland and New York to life in all its diversity and richness, history and modernity. Focusing on the personal stories of the Irish in and of New York. I.NY welcomes and tells those stories through conversation and debate, interviews and performances, cultural and political discourse, music, literature, film, fashion, food, sport and arts events.

In local fashion, The Adare Village for fashion gala charity show has been announced for Monday, Oct 16th and will take place in the renowned Adare manor hotel.  The location was chosen to showcase the boutiques on the best stage possible. Adare is known for its local fashion boutiques and this gala aims to promote Adare as a fashion destination in both Limerick and Europe. The event has been organized to raise Adare’s fashion profile by the Holman Lee Agency in association with all our participating boutiques.

They also discussed Milford Care Centre has received an outstanding €25,000 from the annual Milford to Kilkee Cycle in memory of Louise Doherty, which took place on Saturday, June 1. Louise Doherty was battling with cancer and benefitted from the services that Milford Hospice provided, before her death last year. Her family took part in the 95km cycle to help raise money for the Milford Care Centre.

Milford Hospice was chosen as the receiving charity because of the care and the support that they provided to Louise and her family. Karen Doherty spoke to I Love Limerick about her eldest sister Louise, “Louise was such a loving and caring person, who always thought of others. I have never met anyone as selfless as her. She was a health care assistant in University Hospital Limerick, and just loved helping anyone she could. She was loved by so many, and we will always miss her.”

Another local fundraiser was The St Michael’s Rowing Club Urban Run will return for 2019, taking place on October 6th, sponsored by Sherry Fitzgerald, Limerick. Funds raised through the SMRC Urban Run 2019 are invested in St Michael’s Rowing Club Junior Rowing Programme and the event’s Charity Partners – Limerick Suicide Watch, whose voluntary work is regrettably needed more and more these days. This year they are delighted to also partner up with Limerick Sanctuary Running Group to offer free racing places to runners who are in direct provision. The 10km road-race and 5km family fun-run has previously attracted a combined five hundred runners of all ages to compete. Entry for the event is €20 for the 10km race and €15

Local Irish author Judi Curtin, the renowned Limerick children’s writer, is set to launch her newest book ‘Lily at Lisadell’ in O’Mahony’s Bookshop in the city this Thursday, September 26th at 6.30 pm. Judi Curtin was born in London however she moved to Cork at the age of eight and now lives in Limerick. She studies English and German in UCC and later trained as a primary school teacher in Dublin.

After years of teaching Judi decided to revisit her childhood dream of becoming a writer. The love of her books stretches worldwide as many of her books have been published in countries such as Australia, Brazil, Spain, Germany, and Russia. Judi is most commonly known for her much-loved books featuring Alice and Megan and the friendship and adventures they endeavor.

Judi Curtin, said, “I’m so happy to be launching my 27th book, ‘Lily at Lissadell,’ in O’Mahonys on September 26th. It’s my first work of historical fiction for children, but it won’t be my last – I loved the experience. All welcome to join me in the celebrations”.

The Limerick Jazz festival is back, and the festival celebrating eight years in Limerick. Limerick City will host top international and Irish artists for the eighth annual Limerick Jazz Festival, running from 26 to 29 September 2019. All this year’s ticketed events take place in the award-winning Dolan’s Pub venue. Free events include Thursday night’s jazz trail at seven different venues across the city and on Saturday there is a Music for Kids workshop in Limerick Youth Theatre and a public masterclass with Ant Law at the Hunt Museum.

Stephen James Smith, the Dublin poet and playwright central to the rise of the vibrant spoken word scene in Ireland today, kicks off his UK and Irish tour this October. Fans can expect an interactive gig, unlike any poetry reading you’ve been to before. Stephen will be joined by legendary Manchester poet Tony Walsh as a special guest on the full UK and Ireland Tour with the two bards set to regale the audience for over 90 minutes with poems of sorrow and joy, no doubt new stories will arise on the journey. Tickets are on sale now for all UK and Ireland dates which include Dolan’s Limerick on October 4.

They also discussed the latest gigs in limerick,  David Keenan will play Dolans Warehouse on Sunday, December 15 as announced by Dolans Presents. Keenan, currently accompanying Hozier on his European tour has announced his Limerick date as he prepares for the release of his first studio album in January. His debut album, ‘A Beginner’s Guide to Bravery’ is set for release on January 10th and is described by Keenan as “A document of experiences with the human condition from before to present tense. Tickets are on sale now and retailing for 20 euro.

Dolans has announced that the Irish singer-songwriter Sinead O’Connor has confirmed to play Live at the Big Top in Limerick on Friday, November 1. Her tour around Ireland was announced in early August and since then, she has appeared on the Late Late show, with her performance of the Prince classic ‘Nothing compares 2 U’, resulting in her receiving over 1.7 million views on social media. She rose to fame in the 1980s, with her power ballad version of Prince’s song ‘Nothing Compares 2 u’. O’Connor’s emergence back into the public eye has been widely welcomed. While O’Connor has been in the public eye for many years, this year will mark her comeback in the music industry, with many of her tour dates across Ireland already sold out. Tickets go on sale Friday the 27th of Sept @ 9 AM, costing 46 euro a ticket.