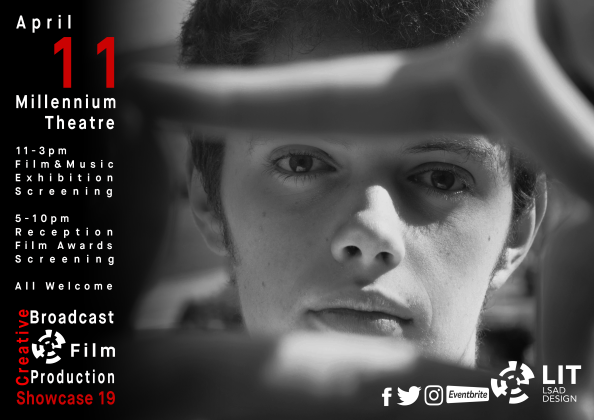 LIT Film and Media Showcase19 will take place in the LIT Millennium Theatre. It will be a visual celebration of short film screenings as well as film & music exhibitions.

Creative Broadcast & Film Production students and staff at LIT are pleased to announce details of the LIT Film and Media Showcase19 on Thursday, April 11 in the LIT Millennium Theatre. The daylong showcase, which is a visual celebration of short film screenings as well as film & music exhibitions, will see student’s present films ranging from fiction, documentary, and animation. This public showcase offers an exciting opportunity to view the latest work of emerging filmmakers working in Limerick today.

Showcase19 is generously supported by film & media production companies in Limerick who have come on board to celebrate the work of these talented filmmakers.

Below is the list of the awards and supporting Film & Media Production companies:

A number of events will run alongside the showcase including a presentation by Nigel Mercier at 1 pm on how to become a Film & TV Extra. Nigel’s company, “Set Extras” is the leading extras company in the West of Ireland. Providing extras since 2016 for TV Commercials, Music Videos, and local International Films. An award-winning actor, Nigel will offer an overview of the extras casting process, what casting directors are looking for, and how you can get involved. For anyone interested in TV and Film production who would like to learn more about becoming an extra, this is the event for you. SetExtras.ie have some of the most experienced casting directors working in Ireland today and a large database of people in the Limerick, Tipperary, Clare, and Kerry areas. To find out more, why not pop along.

Following Nigel Mercier’s presentation will be a series of Music Exhibitions from 2 pm – 6 pm. This event, entitled “Scene and Heard” will see Music Technology and Production students from the Interactive Audio module perform live interpretations of audio recorded from a selection of short video scenes.

Creative Broadcast & Film Production is a Level 8 BSc (Hons) Film and Screen Broadcast production programme. Students explore the dynamic world of Film & Broadcast Media Production and develop the key creative, technical, and storytelling skills to succeed. This skills-based programme offers students an exciting opportunity to explore the world of the broadcast media industry. It covers a range of disciplines across Film & TV Production, Visual Effects, editing, radio, audio mixing, photography, as well as broadcast technologies across a range of new and traditional media platforms. We offer our students a range of prospects for both academic & career progression in the broadcast, film, creative media industries, as well as extensive hands-on production work experience.

If you have a story to tell, we will show you how.

For CAO students hoping to attend the programme in September, the showcase is a wonderful opportunity to find out more about the programme, see student examples, and meet the lecturers. All welcome.

Film Screening from 11 am

Related Topics:filmlitLIT Millennium Theatre
Up Next