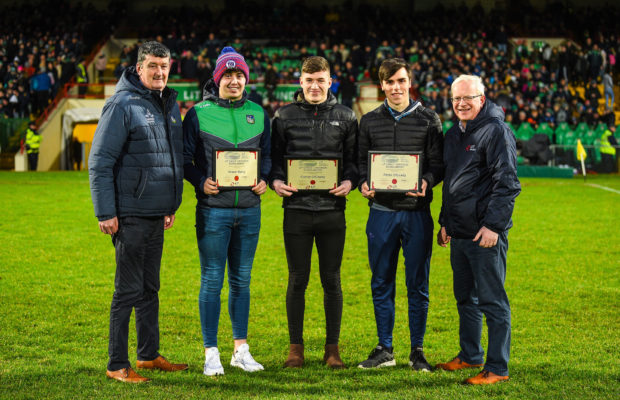 LIT Gaelic Ground Scholarship recipients Shaun Barry from Kildimo / Pallaskenry, Conor O’Grady from Hospital / Herbertstown, and Peter O’Grady from Ahane are presented with their scholarships by Limerick GAA County Board Chairman John Cregan, left, and LIT President Vincent Cunnane at half time of the Allianz Hurling League Division 1 Group A Round 3 match between Limerick and Waterford at the LIT Gaelic Grounds in Limerick. Photo by Diarmuid Greene

Three Limerick GAA club members attending Limerick Institute of Technology received the inaugural LIT Gaelic Ground Scholarships on the grounds from which the scholarship programme took its name, during the Allianz League game between Limerick and Waterford on Saturday, March 7, 2020.

As part of the scholarship programme, the three recipients have their college fees paid for the year.

The unique scholarship programme, aimed at Limerick GAA members who currently attend or plan to attend LIT next year, is part of the agreement which included the re-naming of Limerick’s county grounds as LIT Gaelic Grounds and incorporates Limerick GAA internships and work experience for LIT students in sports coaching, event management, marketing and other areas as well as LIT support for Limerick GAA clubs.

This year’s successful applicants proved they were dedicated to their local community as well as their club and studies.

Conor O’Grady from Hospital-Herbertstown GAA Club is a third-year Marketing and Management (Level 8) student in LIT.  Heavily involved in his GAA club as a player, Conor is also keen to support underage players in a coaching and leadership role.

Being a role model to younger players does not stop at the entrance to the local pitch, he also leads the way by getting involved in the Team Limerick Clean-Up in his home town of Herbertstown.

Shaun Barry is a first-year, Business Studies with Sports Management (Level 8) student at LIT and has been involved with his local Kildimo-Pallaskenry GAA Club since he was under 6.

He played hurling for Limerick at Under 14 and Under 17. Shaun is also keen to share his skills with the younger players in his parish as he not only coaches at Cúl Camps, but also assist the local underage teams in his club when work allows, and trains the hurling teams in his former primary school – Pallaskenry NS – one afternoon a week. 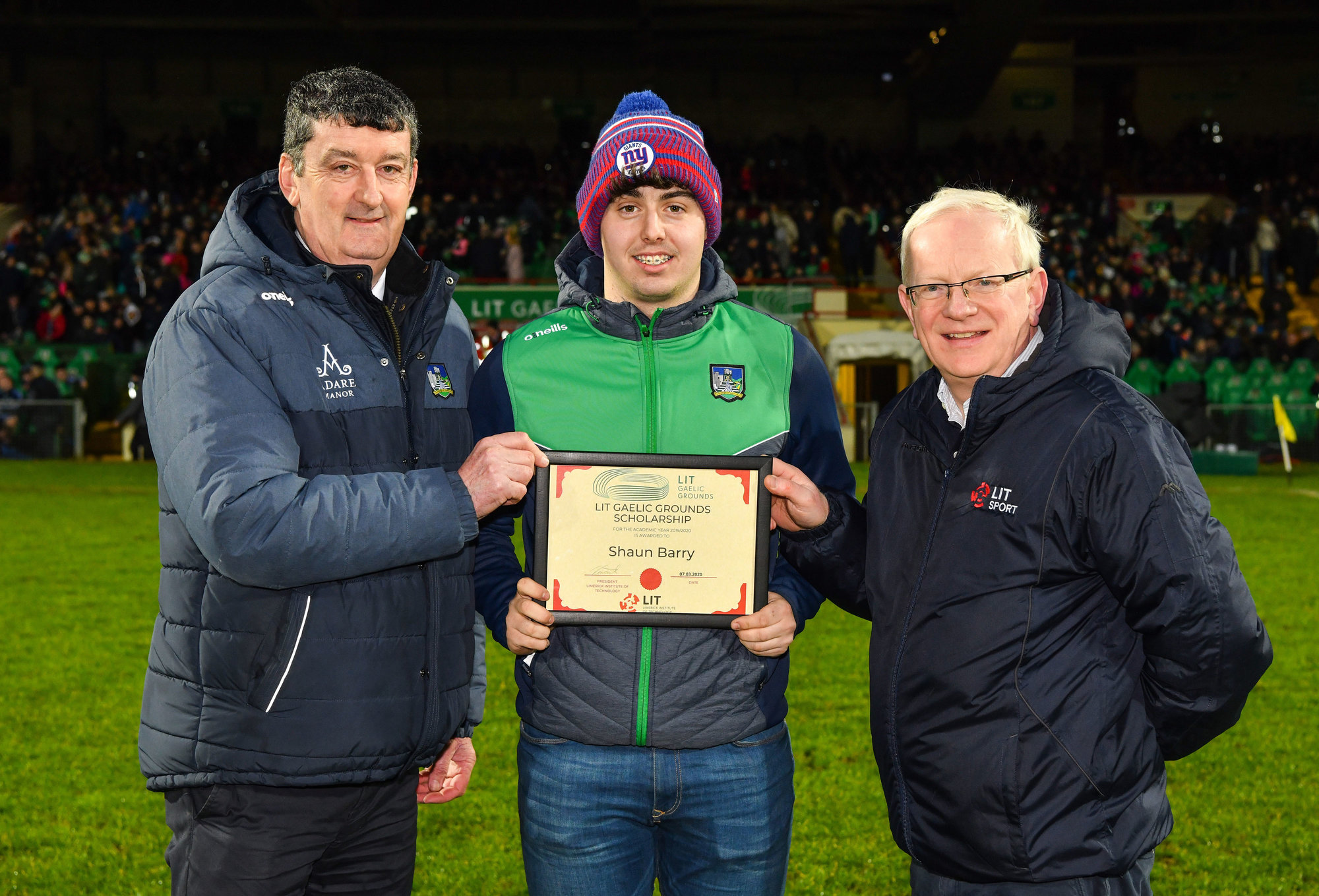 Peter O’Grady, is in the first year in LIT studying Mechanical Engineering (Level 8). He plays both hurling and football with Ahane GAA Club and volunteers each week to help run the clubhouse bar. Also a Cúl Camp coach, he looks forward to taking up a coaching role with Ahane Bórd na nÓg.

Congratulating the scholarship recipients LIT President Prof Cunnane said,  “These scholarships encompasses LIT’s and Limerick GAA’s joint values of community support and involvement, by supporting access to education and encouraging our students to get involved in their local clubs and voluntary organisations.”

Limerick GAA Chairman Mr Cregan added, “This scholarship programme is an example of how LIT and Limerick GAA positively impacts the lives of people in our community.

When LIT and Limerick GAA combine our resources like this, not only are the students supported as they continue their studies but there are ongoing benefits for their local communities as well as the GAA.

I would, therefore, encourage all eligible students to apply for the next tranche of the LIT Gaelic Grounds scholarships.”

Jimmy Browne, LIT’s Vice President for Corporate Services & Capital Development said, “To apply for the scholarship applicants must be involved with a GAA Club, Ladies Football Club or Camogie Club in Limerick or LIT, but do not necessarily have to play the game as the programme also includes administration scholarships.

The administration scholarships are for club members who support the LIT sports clubs and their club or community in other ways, such as through club administration or demonstrated community leadership.

“As well as being a member of the GAA, the applicants must also demonstrate how they are involved in their local community or club, as part of the application process.”