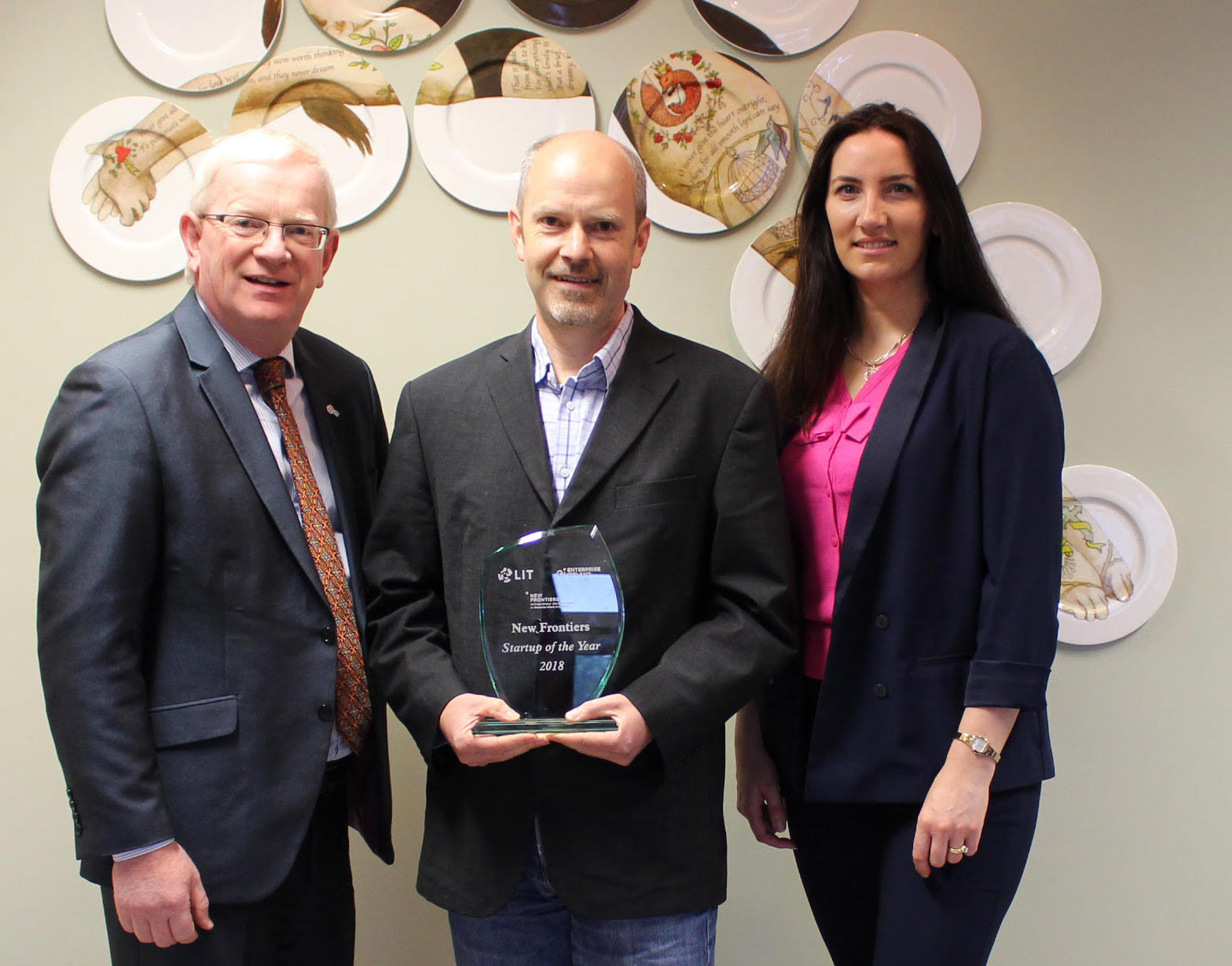 A medical device to prevent UTIs, a cashless taxi app, an online car service booking system and a games company were the big winners at the LIT New Frontiers Awards 2018 held this week.

Nine new business leaders from the acclaimed New Frontiers programme showcased their start-up companies at a ceremony in the Millennium Theatre at LIT on Tuesday, June 19, 2018.

New Frontiers is the leading national entrepreneur development programme run by LIT and Enterprise Ireland at the Hartnett Enterprise Acceleration Centre in collaboration with the Nexus Innovation Centre.

The programme focuses on developing core entrepreneur and leadership skills, an innovators toolkit and opening networks for promising entrepreneurs who have ideas with international potential.

The end of the year, LIT New Frontiers Awards 2018 supported by LIT, EI Enterprise Ireland, Limerick Local Enterprise Office, HOMS Solicitors and Bridgewater Management, further recognizes the entrepreneurship and innovation through awards for Startup of the Year, Best Business Opportunity, Best Innovation and One to Watch.

The LIT New Frontiers Awards 2018 Startup of the Year was Assuré Medical, a medical device company founded by Ger O’Keeffe. The company is focusing on treating Urinary Tract Infections (UTIs) by a preventative prophylactic rather than continually relying on antibiotics.

The LIT New Frontiers Awards 2018 for Best Business Opportunity went to Richie Commins Flag, a taxi app that allows users to travel and pay without the use of their phone, bank card or cash. This new “wallet-less feature” allows the user to flag a taxi on the street, give the driver his or her name and enter a four-digit PIN on the driver’s app to effect payment from his or her pre-registered card.

Gerard Comerford was recognized as the LIT New Frontiers Awards 2018 One to Watch for his company – Cerebros Games. The competitive e-sport player in Pro Evolution Soccer is making deliberate use of the “disruptive innovation model” to address players’ under-served desire for innovative gaming experiences at a low cost. He then uses the business to fund products that deliver more sophisticated innovative experiences that engage players’ intelligence and creativity.

Congratulating the New Frontiers Graduates Prof. Vincent Cunnane, President of LIT emphasized the importance of innovation and enterprise to LIT, “The New Frontiers entrepreneurs are playing a very significant role in Irish business – driving the economy forward and impacting on society. “We want to facilitate and grow that sense of leadership, that sense innovation, that entrepreneurial instinct, that passion.  We want to help businesses succeed, and LIT looks forward to continuing our support as these businesses grow,” he said.

Paula Carroll, Programme Manager at Enterprise Ireland said, “New Frontiers is a truly national programme, having a significant regional outreach through the Institutes of Technology, enabling would-be entrepreneurs from all differing parts of the country to benefit from a professional and comprehensive educational programme. Enterprise Ireland is proud to support this programme and is committed to continuing its investment in programmes such as this. We congratulate all the LIT graduates of 2018 and wish them every success in their future businesses.”

The keynote speaker at the LIT New Frontiers Awards 2018 was David Evans MBE, a serial entrepreneur who founded The Grass Roots Group in London in 1980 and is now leading a number of new enterprises including Matildas Planet, a client of the Hartnett Centre.

LIT currently has an open call for New Frontiers 2018/2019 which starts in October. Application deadline is August 15, 2018, with more details on the programme on www.HartnettCentre.ie.

Related Topics:litNew Frontiers Award
Up Next