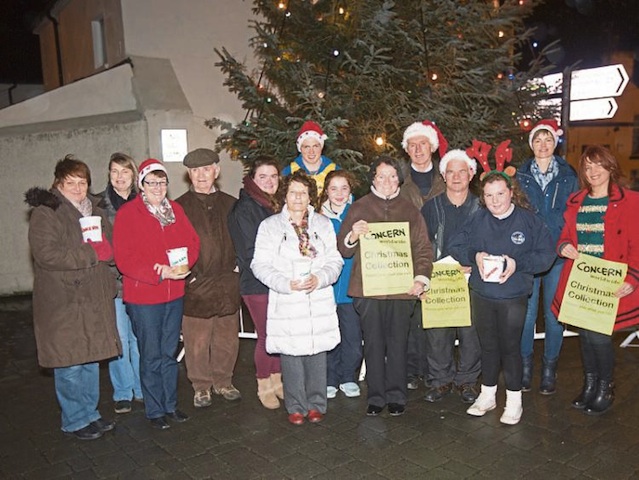 Richard Lynch
Pictured above Mark Reidy, Croom (tenth from left) who received a lifetime achievement award from Concern, with fellow volunteers Elizabeth and Mairead Moloney, Una Hayes, Danny Quain, Niamh Hayes, Essie Quain.Local Limerick man honoured by Concern.
Local Limerick man honoured by Concern. Concern has honoured Mark Reidy work and commitment by awarding him with a lifetime achievement award. Fr Willie Walsh started collecting funds for the Concern 40 years ago and since has raised €100,000 for the charity.In that time local dairy farmer Mark Reidy has become one of Crooms most dedicated volunteers.
The ever humble Mr.Reidy, insisted he did not achieve this on his own, and feels fellow volunteers also deserve acknowledgment and congratulations.

The local dairy farmer has two sisters who worked overseas with Concern Worldwide. This was initially why Mr Reidy got involved with Concern.

Mark was involved in the local youth club with Fr Walsh, which was where their working relationship started. Mark Reidy did the 24 hour fast every year at the youth club in aid of Concern. He encouraged other people to get involved, which they did. The late Sheila Casey and Breda Naughton got involved in the fast for years, and Mark felt that their efforts too should be acknowledged.

Every Christmas Eve Mark,  Fr Walsh and the Concern volunteers assemble at the crib in the centre of Croom to collect for the fast. This past December marked Croom’s 40th annual Concern fast. The fast gives participants a very small idea of what it is like to have an empty stomach all year round.

As well as giving up food participants can give up something they love.

This year’s event has already raised just over €133,000 in total. This showcases the generosity of the people of Croom, who have helped Mark Reidy to help Concern

The money raised helps to  provide high-energy therapeutic food for malnourished children and will also give families the long-term support needed to feed their children in years to come.

Meet the Limerick Contestants on The Voice of Ireland